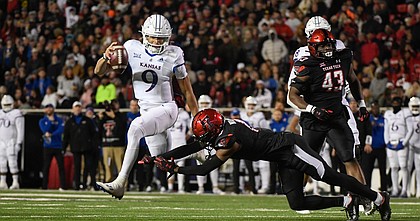 LUBBOCK, Texas (AP) — Another slow start on the road put the Kansas football team in a deep hole early on Saturday night, and the Jayhawks were unable to crawl all the way out of it.

"At the end of the day, Texas Tech executed,” Kansas head coach Lance Leipold said. “We had opportunities to make plays, close gaps and we didn’t. There were a lot of different things in this game that we were outplayed in.” 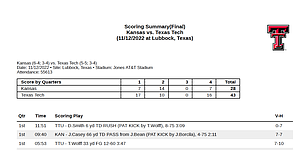 Quentin Skinner and Bean connected for a 20-yard touchdown to pull the Jayhawks within 33-28 with eight minutes remaining in the game, but the Red Raiders used a Trey Wolff field goal and a strip sack that led to the final touchdown to hold on for the win.

KU place kicker Jacob Borcila missed a pair of field goals in the first and third quarter, that made KU's comeback attempt a bigger challenge than it already was. Both kicks hit the right upright, stealing potential momentum from Kansas and allowing Texas Tech to maintain control.

Shough rushed for a 9-yard touchdown on the first play of the fourth quarter to give Texas Tech (5-5, 3-4 Big 12 Conference) a 33-21 lead. It was the first score by either team in the second half.

“We talked this week about finishing games in the fourth quarter,” Texas Tech coach Joey McGuire said. “I thought we did such a good job of finishing that game as a team.”

Bean was 17-for-28 passing for 270 yards. He threw three touchdown passes and ran for a score in his fourth start of the season after taking over for the injured Jalon Daniels. Jared Casey and Luke Grimm were the benefactors of two Bean passing scores in the first half.

Neal rushed for 190 yards just a week after rushing for 224 yards against Oklahoma State.

“Considering everything that we're putting on his shoulders right now at this stage of the season, he's had his two most workman like carry totals these last two games (and been) highly productive," Leipold said. "He’s in good rhythm. He sees things and you can see some of those, maybe not necessarily big plays, but the consistent 7-, 8-, 10-yard runs because he’s got a good feel for how things are playing out.”

Kansas accumulated 525 yards of total offense and 293 of those came through the passing game.

With KU down two scores late, Leipold turned the game over to true freshman QB Ethan Vasko instead of sticking with Bean or turning to injured starter Jalon Daniels. Leipold said Bean took a shot to his mid-section late in Saturday's game, just as he did in last week's win over Oklahoma State and, "was not able to return."

“At that point, where everything’s at with (Daniels) and standing around in this weather, it would not be a wise decision to put him out there right now,” Leipold said after the game. “But he’s practicing every day and he’s very close.”

Tahj Brooks sealed the victory with a 5-yard touchdown run with 3:33 remaining in the game. Four different Red Raiders scored four rushing touchdowns in the win.

Shough was 16-for-25 passing for 246 yards and a touchdown in his first start since the opening week of the season. Texas Tech totaled 506 yards of offense with 260 of them on the ground. 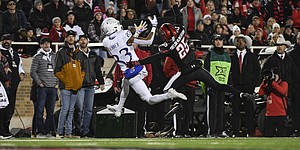 The Red Raiders used a brief two-quarterback system with Shough and Donovan Smith. Smith rushed for a 6-yard touchdown on the opening drive where Shough was responsible for 57 of the 75 yards on the drive.

Kansas: The Jayhawks found success in the passing game. Bean found Casey for a 66-yard touchdown pass on a fourth-and-1 play for an early score. Kansas struggled to limit the Red Raiders rushing attack. A pair of Bean turnovers and missed field goals hampered Kansas.

Texas Tech: The Red Raiders entered the game eighth in the conference in rushing offense averaging 143.5 yards per game. Shough led the way as the Red Raiders accumulated 260 rushing yards. The secondary couldn’t slow the Jayhawks giving up 15.4 yards per completion.

Texas Tech won its fifth home game of the season. It was the first time since 2009 the Red Raiders recorded five or more wins at home in a season. With one final game in Lubbock slated on the schedule, Texas Tech could match the 6-1 home record of its 2009 squad. Texas Tech needs one win to become bowl-eligible.

Kansas: The Jayhawks will host Texas for senior day.

I'm over Borcila at this point. Is there seriously no one on the roster who can do better than he can?

We NEED a reliable FG kicker!

He is just aiming wrong, he needs to play his hook, or slice whichever one he is hitting on pregame warmups.

If you are hooking the first tee shot, my go to golf miss hit, then he should just aim to the right more. Borcilla would need to aim 1-2 yards or more with some of the ducks he is hitting.

He does need to win a kicking competition if he is on the team next year.

How we mucked up the last 90 seconds of the first half, was a key turning point to me. We gave them 3 points, instead of us scoring or just kneeling on the ball. Penalties, missed tackles added to the loss. Maybe we shouldn't defer the kickoff until the second half. Lets go beat Texas!

Although no one is into moral victories, We need to look at the positive side on this. The Hawks made a number of mistakes and had to go to the third string quarterback. Nevertheless, they only lost by 15 on the road to a good team. Sure, losing by 15 isn’t like losing by three or winning. But, keep in mind last year we were losing by 40 or more with mostly the same players. Let’s give the kids some grace as everybody gets ready for the next game.

Also, we really need to evaluate our value of the sport when so many of the kids get seriously injured playing it. Is our entertainment worth it? It is also a given that a number of them will suffer from CTE during their lives and the horrific lifestyle and death it leads to. Are we nothing better than the Romans who went to watch the death battles and executions in the Colosseum?

I agree, but violence in many sports entertainment options has been around thousands of years. Gladiators, Bull Fighting, Boxing. With MMA being the new option.

We still use violence for dominance today (Ukraine). Like any predator.

We are not better than this. We are this.

This was my first time since 2013 watching a Kansas football game instead of listening to it. And oh boy, was it cringey to watch. Missed tackles, stupid penalties, missed field goals, and turnovers at the worst possible time.

There is still a great deal of work for Lance Leipold and his coaching staff to do, not just the rest of the season, but in seasons to come.

This was KU's last realistic chance to pick up a seventh win, and I have a hard time believing they will beat Texas and/or Kansas State the next two weeks. I hope I am wrong, but I just don't see it. I would hate to see these guys end up 6-6 and miss a bowl game like the 2006 team did after all the hoopla about earning bowl eligibility for the first time in 14 years.

KU will finish 6-6. They'll get their bowl bid. I'd love to think we could beat either UT or KSU, and reality the odds are better we'd win next week at home as opposed to Manhattan.

And im not going to lie... of all the "turnaround" aspect of what's happening with KU football is fantastic. It certainly appears to be building towards the future.

But we have GOT to beat Kansas State at some point.

It’s going to be great t-shirt weather for the UT game - like maybe 35 degrees at kickoff. Windchill factor will make it even more fun!

Schulz makes a good point that we should feel some empathy for these "young, modern day gladiators".

Landon's comments are so fair weather, that I will try to ignore him (and hope he goes away).

As I have mentioned before on this site.

Was TTU game winnable? Yes, it certainly was a winnable game for the Jayhawks.

Homecoming week in Lawrence, KS. Texas players and Staff members will be ready to avenge last seasons loss to the Jayhawks.

So, everyone be prepared for that Football Saturday challenge that lies ahead.......