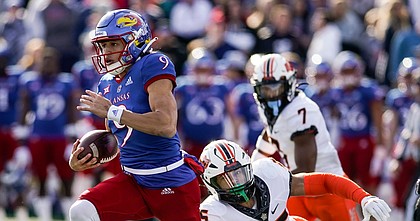 There are a dozen ways to evaluate Kansas quarterback Jason Bean’s impact on this offense and why he has been able to keep KU afloat after starter Jalon Daniels went down with a shoulder injury midway through Game No. 6.

But the best indicator of who Bean is and why this has worked is a story he shared Tuesday about his jersey number.

After wearing No. 17 during his first season with the Jayhawks in 2021, Bean stuck with the number entering Year No. 2 and didn’t really give much thought to it.

However, midway through the 2022 season — just before the Baylor game — Bean switched to No. 9 and has worn it ever since. Asked this week why he made the change, Bean’s reason was short and simple.

“Coach Leipold just asked me if I wanted to change and I said yes,” Bean told a group of reporters.

So, it was head coach Lance Leipold’s idea?

Surely Bean had worn No. 9 before then, right?

And with that, during his fifth season as a college quarterback, a new era of Jason Bean football was born. Bean said Leipold never gave him a reason for why he sought the change. And Bean never asked.

Here’s the funny part: He never requested No. 17 either.

“Whenever I got here they just gave it to me,” he said. “So, I haven’t really had a choice in either of those numbers.”

Oddly enough, No. 17 was actually the first number Daniels wore as a Jayhawk before switching to No. 6 for his sophomore season in 2021.

Regardless of what number either KU QB is wearing on his jersey, the number that has mattered the most for these Jayhawks is one.

Last week, after coming up short in three previous attempts to become bowl eligible after a 5-0 start, Bean led the Jayhawks to the one win they needed to ensure that Leipold’s second Kansas team will play in a bowl game later this year.

After last week’s win, television cameras caught Bean doubled over and overwhelmed by emotion, a clear sign of what the win meant to him.

Bean was far from the only one on this roster to feel a little emotional about the victory. Leipold and KU offensive coordinator Andy Kotelnicki both said they were thrilled for each Jayhawk and staff member, but especially Bean.

“It’s been a bumpy road at times for him,” Leipold said. “Persevering and sticking with the program says a lot. We’ve seen more emotion from him, (him being) more vocal than maybe a year ago. It’s been good to see.”

Bean’s play has been equally impressive. Although he does not carry himself with quite the same charisma and swagger as Daniels, the Kansas offense has not missed a beat with Bean at QB.

Kansas has averaged 34 points per game in his three starts, and that does not even take into account the 28 points he led the Jayahwks to in the second half of a 7-point loss to now-fourth-ranked TCU, when Bean came in off the bench after Daniels’ injury.

During that time, he has accounted for 12 total touchdowns and completed at least 59% of his passes in each game, including a 78.3% clip in last week’s win over Oklahoma State.

His coaches and teammates will line up to give Bean credit for the way he responded to both starting the season as the backup and being ready to take over when he was needed.

And Bean will be the first to deflect it.

“Everybody on this team, we’ve been through a lot to get to this position,” Bean said. “And we’re all just blessed to be here and finally get that sixth win for this city and just the guys who have been here for all those tough years. It just feels good to finally get that weight off our shoulders.”

Kotelnicki said the way Bean has handled himself during the past five weeks has shown his character and how much he loves the KU football program.

“I think everyone can relate (to) that,” Kotelnicki said. “I think that’s what’s important. That’s what college athletics is. That’s football. I think it’s great to see somebody who struggled, (things) didn’t go their way, who wasn’t named the starting quarterback, to preserve and stick with it and get an opportunity and capitalize on it. I think everyone, maybe not in the college football environment, but everyone’s dealt with that kind of stuff in their life before.”

With the win they needed for bowl eligibility now in the bag, Bean and the Jayhawks will go looking for win No. 7 this weekend at Texas Tech. Kickoff is slated for 6 p.m. and the game will be shown on ESPN+.

KU DC Brian Borland on preparing for another tempo team in Texas Tech by KUsports.com

Kansas RB Devin Neal on his workload & the significance of KU being bowl eligible by KUsports.com

KU QB Jason Bean on getting that sixth win & this week’s challenge by KUsports.com

KU TE Jared Casey says being a part of this KU team that got over the hump is special by KUsports.com

JD6 is just too good, and we need him back. But it's very, very difficult to be displeased with anything Bean has done with this team.

I'm not getting why everyone thinks having JD back is going to be a difference maker. Offense hasn't missed a beat in his absence. Not saying JD isn't good, but his last 6 quarters were underwhelming. Bean on the other hand has put up pretty good numbers against better teams.

JD is a tougher runner, makes better passes, and overall better decisions. He's not as fast as Bean, but he did make better decisions and the offense was more potent with JD.

More potent how? Certainly not more points (gotta compare the competition) and that's ultimately what matters.

Given the competition... OU's defense sucks for example We've stalled inside the 10 yard line how many times with Bean compared to with Daniels? At least 2x as many with Bean in the exact same number of minutes. Bean's thrown more interceptions on fewer attempts than Daniels, and we've punted way more times with Bean than with Daniels. That toughness running the ball is one of the biggest factors but also the decisions on where to throw it and better third down conversion rate with Daniels.

Also, I will not forget to mention, JD 5-1 as a starter, and I will say Bean is 1-4 as a starter. He played the whole 2nd half and part of the first half against TCU.

Yeah, Daniels is the starter - but Bean may be the best backup qb EVER at KU.

Lucky to have him.

Mr. Bean has been outstanding. He gutted it out against OSU (and during his KU career) and gave fans a ton to cheer for. Congratulations to him and the whole team. However, if feels like KU fans and players think the regular season is over because they won 6 games for the first time in 14 years. It is not time to be satisfied and complacent. Starting tomorrow, KU needs to play their best players at every position and try and compete for a chance of a rematch with TCU (they will need to win out and hope for help). Mr. Bean has played well, but he has also made costly mistakes in the previous 3 losses. For example, that overthrow of the swing pass to D. Neal on the final drive against TCU was a killer. But then again, KU would not have even had a chance to tie TCU in the closing seconds if not for his second half rally. He is an outstanding runner and passer, but certain passes still give him trouble (give Casey a ton of credit for hauling in that one-handed grab against OSU). And his running of the option is not optimal (listen to David Lawrence on the broadcast). But then again, his TD run against OSU was fantastic. It is fun to finally see that KU has the faster players. Given the state of KU football, they need to play near perfect to have a chance in their last 3 games. If coach K and Leipold decide that Mr. Bean gives them the best chance to win, then the Jayhawk nation is in full support. He has been great and the team should thinking of a Big 12 championship. Rock Chalk.

Todd Reesing was the best backup QB ever. Or maybe Nolan Cromwell. Goodness.

Andy - While there’s celebrating, I’ve not gotten the feeling that anyone thinks the season is over. Especially not the players. Back to watch film to correct mistakes on Sunday.

In the way too far ahead category, I think Jason has a Covid year if he wants it next year. What are the chances he comes back to be QB2 again? If Vasko really has developed as much as some say, would next year be a year for a position switch? Pull a Meier? Would his speed give him next level potential?

In looking at the stats, the one that obviously jumps out is turnover margin.

If we can get one or ideally two more turnovers than TT, that should be enough to make the difference in the game.

Tech is fast and athletic. Need to control their all conference DE or we will fail to score enough.

Bean made the conversion from (#17) Don Meredith to (#9) Sonny Jurgensen!

Is Bean still the starter at Texas Tech? Is Daniels still recovering?

Where is the Pre-Game "Know the Foe" Documentation?

So I heard LL asked Bean to change jersey numbers, but I haven't heard the reason why. Anybody know?

Bean has been fantastic. Yes he does occasionally sail the ball or turn it over--the lack of awareness on the sack-fumble was not inspiring confidence. However he deserves no blame for losses imo. Honestly the team has just lost football games the way football games are lost in good competition. Obviously a few of em feel like opportunities missed but nothing shameworthy. The team has been great even in defeat. Does Daniels possibly come through on some of these opportunities? Quite possibly. To me the biggest thing is not having Hishaw. Neal has been amazing but we could be playing both of them.