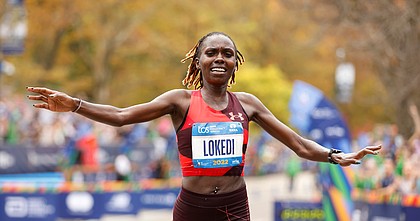 Chebet won the men's race and Lokedi won the women's race on an unseasonably warm day, with temperatures in the 70s making it one of the hottest in race history since the marathon was moved to November in 1986.

It was Lokedi's first-ever marathon and she finished in 2:23.23 — just ahead of Lonah Chemtai Salpeter of Israel.

The 28-year-old was in a tight race before she pulled ahead of Chemtai Salpeter in the final two miles to win by seven seconds and finish about 50 seconds off the course record.

“I didn't expect to win, I expected to run well,” Lokedi said. “It was a good outcome and I'm really excited.”

Lokedi competed for the Jayhawks from 2015-19 in both cross country and track and field. Lokedi was the 2016 and 2017 Big 12 Cross Country champion and Women’s Runner of the Year.

In all, Lokedi was named a first-team All-American seven times during her KU career.