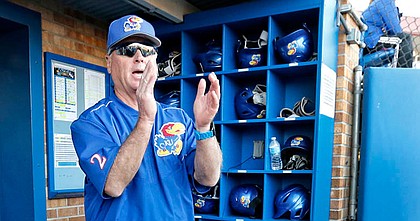 Price formalized his decision Sunday, a day after the Jayhawks finished the season with an 11-6 loss at No. 17 Texas. They finished the season 20-35, including 4-20 in the conference, and missed out on the eight-team Big 12 tournament, which begins Wednesday at Globe Life Field in Arlington, Texas.

"For the past 20 years, I have been honored and privileged to serve as the head baseball coach at the University of Kansas," Price said in a statement issued by the university Sunday afternoon. "After meeting with Travis Goff today, we agreed that it's time for me to announce my retirement."

Kansas will likely have another draft pick after next season in shortstop Maui Ahuna. Price said major-league scouts have told him that Ahuna, from Hilo, Hawaii, projects as a first-round pick.

"Ritch Price poured his heart and soul into the Kansas Baseball program for two decades, and we are forever grateful for his significant contributions to our university, athletic department and baseball program," athletic director Travis Goff said in the statement. "His pride for Kansas Baseball is unmatched and he has made an indelible impact on countless young men and our program. On behalf of the entire athletic department, we wish Ritch the very best in his well-deserved retirement."

Price, who is from Sweet Home, Oregon, coached for nine seasons at Cal Poly prior to being hired at Kansas and also was the head coach at a pair of high schools and a pair of community colleges. He was inducted into the California Community College Baseball Coaches Association Hall of Fame in May 2008.

His 20 years as a head coach in the Big 12 tie Texas' Augie Garrido, who retired in 2016 and died in 2018 following a stroke, as the most in conference history.

In his statement, Price said he wanted to thank all of his players for their time with him at Kansas.

"I've always believed that baseball is a player's game and I've always taken great pride in being a player's coach," he said. "I'm so proud of the student-athletes who have played at KU during my tenure. My guys have represented our baseball program on the field, in the classroom and in our community in a first-class manner. I love you boys, you're the best!"

He’s talking about the current KU softball coach having the same thing happen; leaving the position. 🥎 KU baseball had a rough year after some huge expectations were laid out there; apparently there were some key pitching injuries; it would seem to be time for a change. Thank you for your commitment Coach Price. ⚾️

Dyrk ------- thanks for that explanation. It all makes sense now.