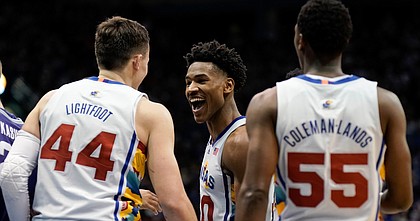 Former Kansas guard Ochai Agbaji is in Chicago at the NBA’s pre-draft combine for the second year in a row, however, this time around he will not be scrimmaging.

Agbaji’s father, Olofu, told the Journal-World on Wednesday afternoon that his son elected to sit out of the scrimmages because he decided he’s “not taking any chances at all.”

Agbaji is certainly not alone in operating this way at the combine. An injury at this stage in the process could significantly alter his professional career. With Agbaji already penciled in as a lock first-rounder in the eyes of most draft analysts, there’s just not a whole lot more he needs to do or show pro teams to make him worthy of being a first-round pick.

Agbaji did go through measurements and will continue to participate in interviews and other combine activities. He just will not scrimmage.

On that note, Draft Express guru Jonathan Givony reported earlier today that Agbaji officially measured at 6 feet, 5.75 inches in shoes, with a wingspan of 6 feet, 10.25 inches and a standing reach of 8 feet, 8 inches while weighing in at 216.8 pounds with 5.4% body fat.

None of those marks put Agbaji in the top five among guards at the 76-man combine, but none of them were seen as numbers that set off any alarms either.

KU junior Christian Braun, who also, is in Chicago with Agbaji and teammate Jalen Wilson, measured at 6 feet, 5.5 inches without shoes, which was the fourth tallest at the combine among the guards, per NBA.com.

Braun and Wilson are slated to scrimmage on Thursday, with Braun playing for Team Johnson and Wilson playing with Team Weaver. Scrimmages are set to begin at 2 p.m.

Is there a list of players sitting out of the scrimmages? Is it higher this year than last and maybe a reason why they brought more players from the G-league combine?

Interesting. I wonder if he has a good feel where he will be drafted, and he likes his chances with that team.

That would make sense. With that in mind, there would be no reason to risk injury.....