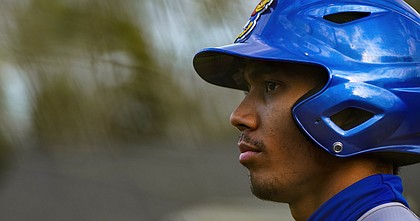 Maui Ahuna hated what he saw.

Leering at him from high above the right-field wall, like in many other ballparks he has played in, was a scoreboard — except this scoreboard was the kind he detested the most. It displayed his statistics in large, white, contrasting numbers, and it was one that forced him to see those numbers out of the corner of his eye while he was standing in the left-handed-batter's box.

In any other circumstance, Ahuna, Kansas' sophomore shortstop sensation, doesn't mind looking at his statistics. He checks them often on his phone, and why wouldn't he? With a .400 batting average entering Saturday's game against TCU that ranked among the top 20 in the nation and a home run total of seven that hints at his emerging power, there's a lot for Ahuna to like. During a game, though, those numbers provide a level of pressure the Hawaii native is still learning to embrace.

Yet a week ago, in that Sunday afternoon game at Kansas State, as Ahuna left the dugout to lead off the top of the eighth inning, he saw that scoreboard. He saw Kansas was trailing 6-3, and he saw the large .400 under his photo in the top left corner. That's when he turned to his roommate, infielder Zac Cox.

A player that has the brightest future of any at Kansas in a long time, a likely first-round pick when he's again eligible for Major League Baseball's first-year player draft next spring, someone who is starting to feel the heft of being Hawaii's next great baseball hope — Ahuna didn't feel any of those things. He knew the challenge, just he and the pitcher. Forget the scoreboard.

"I'm not going to be in the 3s!" he boasted to Cox, knowing his batting average hadn't dipped below .400 all season. That's when a player who simplifies an at-bat to "see ball, hit ball" left the dugout, loosened his wrists with a few twirls of his bat and dug his cleats into the artificial turf.

Hilo, the largest settlement on Hawaii's Big Island, is a town of 40,000 people, one where people work the same jobs as their parents and kids soon realize that any opportunity to get off the island must be welcomed. Tucked between Keaukaha Beach to the north and the airport to the south is a lattice of narrow streets lined with crushed volcanic rock, and a pair of adjoining baseball diamonds with all-dirt infields and no outfield fences lie at their heart.

Ahuna's father, Walter, would often take a tee, a handful of balls, his son and his nephew, Bue Ahuna, and cross the street to the ballfields. The kids, in turn, would wrangle neighborhood friends Kue Martin, Kala'i Rosario, Safea Mauai and Stone Miyao along the way to hit and throw.

The fields are also where Kaha Wong, Ahuna's high school coach and a former minor-leaguer, held wood-bat youth league games on fall weekends. Ahuna — who is Walter Clyde Ahuna III, with "Maui" a nickname given to him by his parents after his birth — has always been clearly a more skilled and instinctual player than his classmates. As a seventh-grader, he was playing against high school juniors and seniors in Wong's league.

"In order to do that, in order to grow, you've got to fail, so when you're playing against older kids, being pushed to that level, you're going to eventually figure out how to be better and how to beat these kids. That's been the biggest thing for a lot of us."

Ahuna's father played baseball at Hawaii-Hilo, when it still had a Division I program, and fostered in his only son an appreciation for the sport at a young age. Any time they'd tune to a game on television, Ahuna refused to focus, since he wished only to go outside and play. When Ahuna was in second grade, his father built a batting cage that only recently was torn down to make room for a pool.

Bony yet brash, Ahuna found success in the field before he did at the plate. As that followed, it allowed him to generate the affirmation he needed to keep playing. He learned to challenge himself to better his accomplishments, knowing few opponents could; during his time at Hilo High, Ahuna rarely encountered a pitcher who could throw faster than 85 mph.

The fall of his sophomore year, Ahuna earned an invitation to a showcase camp held annually in Honolulu by the Tampa Bay Rays. Most coaches of Division I college programs located west of the Mississippi River attend the camp, which is how Kansas coach Ritch Price found himself watching Ahuna and 99 of the other best prospects in the Pacific islands during a three-day period in 2017.

Price, who has had success recruiting players from Hawaii to Kansas, quickly learned that a close friend, Joey Estrella, coached Ahuna's father at Hawaii-Hilo. "I called and talked to his dad about taking care of his son," Price said, and a scholarship offer was made. Ahuna considered Hawaii, Grand Canyon and California Baptist, but knew he wanted to play as a freshman and in a major conference.

The offer, and an opportunity to get off the island, were accepted.

Ahuna backed out of the batter's box after a first-pitch strike against Kansas State redshirt freshman righthander Tyler Ruhl, beat his bat against the arch of his left foot and glared at that scoreboard.

Nearly two seasons at Kansas have provided Ahuna with immeasurable opportunities for growth, and lately, he's been working on maintaining the constructive body language that he believes is befitting a leader. In a similar situation a year ago, he may have grimaced or scowled. Instead, he remained expressionless.

Ahuna tucked his chin, returned to the box and kissed home plate with the top of his black metal bat. Ruhl delivered a 90 mph fastball over the middle, and Ahuna's swing cranked the ball deep into right center field, where it thudded off the padded wall just shy of a home run for a stand-up double.

"I could be anywhere in this country, but I love this place," said Ahuna, who for three days in mid-April led the nation with a .453 batting average, though it finally dipped to .397 after he went 1-for-4 in a 30-3 loss to TCU on Saturday. "This place is good. I love the guys. I love the place. I love the coaches. No doubt. Growing up, exposure was a key thing. I didn't get much, but I'm loving it. I'm loving it here."

Life, and baseball, will soon accelerate for Ahuna, who has carried his carefree essence to Kansas. Although his father's fondness for baseball was nurtured within him, it has been limited to skills and fundamentals: Similar to his distaste for watching games on TV while growing up, Ahuna refuses to watch film of pitchers, and during a recent discussion about record batting averages, he acknowledged he doesn't know who Ted Williams is and has no understanding of the history of the game.

"He's a kid who plays baseball," said Zac Cox, a redshirt sophomore infielder and Ahuna's roommate. "He just genuinely loves playing baseball. He shows up and has fun doing it, and when you enjoy something that much, you become obsessed with it and you want to keep getting better and better. Your love drives you through the game. He's in it for the right reasons."

Kansas, which is 20-31 and last in the Big 12 at 4-16, is unlikely to make the conference tournament. That will offer Ahuna a chance to return to Hilo for roughly two weeks later this month before he joins the Falmouth Commodores of the Cape Cod League, considered the best summer league for college players. If he becomes a first-round pick a year from now, he would be the Jayhawks' first, and the first from Hawaii since Wong in 2011.

"He has a God-given gift, and he doesn't make it complicated," Price said.

Still as wiry as he was in his youth, Ahuna wants to get stronger; standing 6-foot-1, he bulked up from 150 to 170 pounds before the season began in February but has lost some of that weight. He considers additional power to be the next step in his development as a hitter.

So, too, is his confidence. Rarely has Ahuna been tested by anyone as hard as he has challenged himself. As he confronts a future spent playing the game of his childhood, his notion of "see ball, hit ball" will become more difficult, with greater expectations and pressure beckoning.

"I love playing against the best," Ahuna said. "Every time I was in the batting box, I'd look at the pitcher, I'd nod my head, I was like, 'Bring it on.' I just love competing."

Hope to see Maui Ahuna in the MLB in a few years and having a successful career......