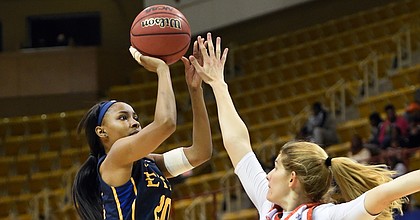 Haynes-Overton, who is from Nashville, will return home as a sixth-year senior after playing in just five games for the Jayhawks. She chose to transfer in January, with one minute in a 71-57 win over Texas Tech serving as her final appearance.

She transferred to Kansas in January 2020 from East Tennessee State, where she was a prolific scorer and a two-time SoCon Defensive Player of the Year. She scored 41 points against then-No. 23 Tennessee in November 2019 and had scored 1,046 points for the Buccaneers at the time of her departure.

After sitting out the rest of the 2019-20 season and then all of the 2020-21 season following her transfer, Haynes-Overton made her first appearance for Kansas in the 81-56 win over Omaha on Nov. 17. She scored 10 points and had five rebounds and two assists in 14 minutes this season.

Haynes-Overton joined guard Aniya Thomas as players who have recently transferred from Kansas. Thomas, the Jayhawks' longest-tenured player, decided last month to transfer to Missouri State for her final season of eligibility.

The Jayhawks also lost guard Julie Brosseau, who was a sixth-year senior last season, and it appears unlikely forward Matea Nikolic, who was a freshman and is from North Macedonia, will return.

Tulsa's Wyvette Mayberry decided to transfer to Kansas last month, and a pair of high school graduates will enroll for next season in guard Bella Swedlund and forward Zsofia Telegdy.

Sounds like a good move for Overton, as it was for Thomas also.

Are there as many transfers in WBB? Mayberry is a nice addition to the roster and would be nice to get one more.

The Erica Haynes-Overton story involves some mystery. On Twitter, some women's basketball coach tweeted that how a coach feels about you when you decide to transfer out is how that coach felt about you all along, and Haynes-Overton retweeted it. Not that you can conclude anything from that, but it suggests that maybe something wasn't quite right, at least in her mind.

There were two reasons she was out for so long following her transfer to KU: (1) eligibility due to the transfer itself, and (2) a torn ACL prior to becoming eligible to play. And, a season-ending knee injury sidelined her early in her junior season at ETSU. As mentioned in the article, it was shortly before that she scored 41 against Tennessee. In that game, she also had 10 rebounds, 7 steals, 4 blocks, and drew 11 fouls. Hello! That's a WNBA level performance, if not downright superhuman! Had she been able to fully recover from her injuries, she very likely would have been our best player.

So, whatever happened, it was a huge disappointment, and really tragic for her if she isn't able to get back to 100%. Would love to know to whole story, but in any case, am wishing her all the best.