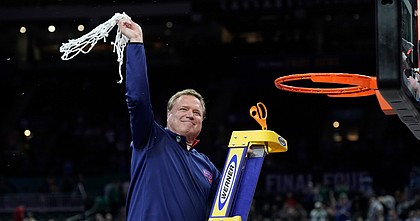 Kansas basketball coach Bill Self and several members of his coaching staff, along with others from the KU athletic department, were in New York City this week for Self to receive the Winged Foot Award from The New York Athletic Club.

Tuesday night, Self joined South Carolina women’s basketball coach Dawn Staley in being the honored guests at a reception for this year’s recipients.

Given annually to the Division I college coach who leads the men and women’s national champions, the Winged Foot Award is in its 26th year of existence. Self also won the award in 2008.

This year, at the reception, he talked about the 2021-22 Jayhawks being “destined to win a national championship.”

Kansas, of course, did just that on April 4 in New Orleans, coming back from a 15-point halftime deficit to beat North Carolina in the national title game. Prior to that, Kansas beat Villanova in New Orleans, Providence and Miami in Chicago and Texas Southern and Creighton in Fort Worth, Texas.

Among the many things Self noted about the Jayhawks' recent run to the 2022 national title was his appreciation for the feeling of ending the season on the highest high possible.

"The wins never feel as good as the losses feel bad," Self said. "Never. Until you win on a Monday or Sunday (for the women) in April. Those wins feel better than all the losses combined felt bad."

While in New York, Self also made an appearance at ESPN studios at Pier 17 to do a radio segment on the Keyshawn, JWill and Max morning show on ESPN radio.

According to a news release announcing the award, the honor “recognizes that the coaches are the players’ guides both on and off the court during a time when good role models are most important.” As part of its stated mission, The New York Athletic Club notes that it takes “great pride in recognizing and commending the people who make such a difference in the lives of student athletes.”

The national champion Jayhawks finished the season 34-6 and brought back to Lawrence the program’s sixth national title and fourth NCAA Tournament title.

KU is expected to make an appearance at The White House in Washington D.C., at some point in the near future, but no exact date has been established for the visit, which has been a customary for champions in both college and professional sports for decades.

You must give the guy his dues. Bill Self is a chess master on the court and one of the most confident guys on the planet. "...there was never a moment where I didn't think we were going to win that game - never". If you polled the Jayhawk nation at halftime (most anyone who watched the game), I would wager that Bill was in a select few of those who felt KU would be victorious. In fact, I had many friends and colleagues around the country who turned off the game at half only to wake up the next morning surprised of the outcome. I truly think Self was more relieved than happy when the buzzer finally sounded and now is soaking up the special feeling that comes with winning a national championship. The 2021-2022 season was a journey with many ups and downs, but in the end the Jayhawks got to hoist the trophy. Rock Chalk.

Well said Andy.
I don’t remember thinking/noticing it at the time, but it was a tied game when David sat down with his second foul. It reminded me of so many people that quit on him during the season. I certainly was wavering but ultimately agreeing with Coach; our ceiling is highest with David. Reminds me a bit of TTaylor in ‘12.
For as much as Coach is great on the court, I think he’s even better off the court. He just always seems to get more out of the players, though there are also obviously some that don’t get it.

WELL DESERVED COACH!!!! Thank you for all you do!!