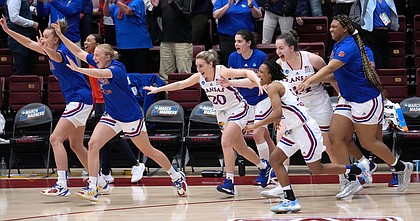 STANFORD, Calif. — Once Kansas set its mind on not getting outhustled for even one more possession, it took over.

Ioanna Chatzileonti had 15 points and 10 rebounds, Holly Kersgieter scored 19 points and eighth-seeded Kansas beat ninth-seeded Georgia Tech 77-58 on Friday night in the first round of the NCAA Tournament.

Junior center Taiyanna Jackson made things difficult in the paint on both ends, finishing with 14 points and seven rebounds. She also swatted a pair of shots to extend her single-season school record to 92 blocks.

Back in the bracket for the first time since 2013, Kansas coach Brandon Schneider hoped his team's tough schedule down the stretch — games against Iowa State, Baylor, Texas and then Oklahoma twice — would do plenty to get his team ready. 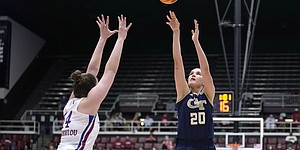 View a gallery of images from Friday's game between the Kansas Jayhawks and Georgia Tech Yellow Jackets at Stanford University.

"It built us. There are times and there are teams who see that and kind of go downhill," Kersgieter said. "But we've just kind of put an emphasis on helping it let us grow. This team, we have a lot of veterans, we've been through a lot together and we've never been here. We were ready. We were really excited. It showed today."

Kersgieter shot 6-for-13 and the Jayhawks got out in transition at every chance, making one extra pass to find the high-percentage shots in a game that featured big runs by both teams in their first matchup.

Digna Strautmane scored 18 points to lead the Yellow Jackets (21-11). Georgia Tech's leading scorer, Lotta-Maj Lahtinen, entered averaging 11 points but was held to seven on 3-for-12 shooting — including 1-for-6 on 3-pointers.

The Jayhawks jumped out to a 10-0 lead and gave it up when the Yellow Jackets went on an impressive 22-3 run to end the first quarter ahead 22-13. 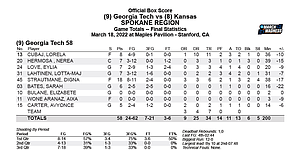 "We couldn't rely on them to stop making shots or to stop playing hard," Kersgieter said. "We had to fix it ourselves. It wasn't really X's and Os. It was just kind of mental, like, 'Hey, we expect runs to happen. It's how you respond.' Obviously, we responded well because we took the lead at halftime and then we never lost the lead again, I don't think, so we did well."

Georgia Tech made its first field goal on Eylia Love's 3-pointer at the 6:16 mark of the opening quarter and rallied to tie it on a 3 by Strautmane at 4:11 before going ahead on Nerea Hermosa's basket the next time down.

But Kansas got it together to dominate the last stretch of the second quarter and the final two periods. The Jayhawks used a 14-3 run over the final 5:48 of the first half to build a 34-31 edge at the break. Georgia Tech committed five turnovers over the last 6:51 of the half and missed six of seven shots.

"Couldn't be prouder of our young women in their fight and determination really throughout the entire ballgame," Schneider said. "We were able to ignite our offense with our defense."

Jackson, who played 24 minutes, was only on the court for five in the first half. She had 12 points and all seven rebounds after halftime.

"I thought she was terrific and probably the primary difference in the second half," Schneider said. "We really debated playing her with two (fouls) in the first half, but we were fortunate to make a little run and not let it get out of hand.

"I thought she was terrific on both ends of the floor. One of her more complete games in particular in the second half of the entire season."

The Jayhawks scored 17 points overall off the 13 turnovers by Georgia Tech, which reached the Sweet 16 last season under coach Nell Fortner for the second time in program history.

The Yellow Jackets shot 7-for-21 from deep, had nine first-half turnovers and were held to nine points in the second quarter. They got to the free-throw line just six times, compared to 17 by the Jayhawks.

"It's a disappointing loss. There's no question, and it's a tough way to end your season," Fortner said. "We just didn't have our best night. Kansas played really well. They did what they wanted to do and we couldn't stop it."

Awesome! And, what a game! The ladies are playing their best basketball at the right time. They showed a lot of poise and character tonight. Congratulations, Jayhawks!

likely play the defending champs, even though Tara has lost to a 16 before.

So happy to hear this. I wish I could have watched it. I'd love to see more coverage!

Whooped up on 'em a little. Good to see.

Great team effort and big time win. KU is clearly a different team when Taiyanna Jackson is on the court. Enjoy the win for a day and then get ready to shock the college women basketball world and beat Stanford. Rock Chalk!

I would encourage you all fans to go to http://espn.com/watch/ - spend like $10 this month, or $3 daily. It's really fun watching KUWBB. It's hard to choose the best player out of this team, each player contributes.

Thomas, maaan... she moves like NBA, with that nifty dish to Jackson... can she play another year?

Jackson - what a difference she made on the court: cleaning the glass, blocking every shots, team came back alive when she's back out of the bench (with 2 fouls - got cheap call for a flopping GT player). Without her, we didn't have answer for Cubaj.

Defense, offense - this team can do all! Stay smart, stay strong, play together, ladies!! Let's beat the Cards!! ROCK CHALK!!!!!

In the Lawrence-KC area the last game was on ESPNU which is included with most cable packages (I think). The KU versus Stanford game is on at 8 pm EST on ESPN. And as mentioned, this team is fun to watch and to cheer for. Their opponent is obviously an elite team and is playing at home. Stanford has a player who dunked the basketball for only the 3rd time in a women's NCAA tournament game during their first round blowout. It will be "Samson versus Goliath". I am sure the lady Jayhawks will play their hearts out. Rock Chalk.

For those who have DirecTV, the game was on ESPNU around the country. Thanks for the notice on the Stanford game Andy.
How wonderful to see the ladies relevant. They should have gotten a ranking at some point and the only way for that happen now is to beat a marquee team which Stanford is.
Go Lady Hawks!

Thanks Andy. espn provides replays - for those fans like me who doesn't have Tivo or recorder.