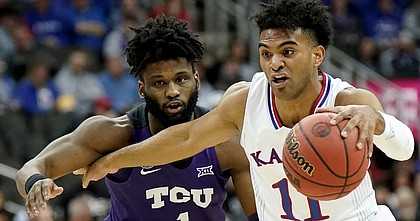 KANSAS CITY, Mo. — Remy Martin scored 10 points and took 10 shots in the Kansas men's basketball team's 75-62 win over TCU in the semifinals of the Big 12 tournament on Friday at T-Mobile Center and said he feels completely healthy after missing a significant portion of the season with a bone bruise in his right knee.

Martin, the senior guard who transferred to Kansas from Arizona State after last season, played 18:45 in the victory for his greatest workload since he played 22 minutes against Texas Tech on Jan. 24.

That was before he missed seven games to recover from the knee injury, which had limited him since early January. 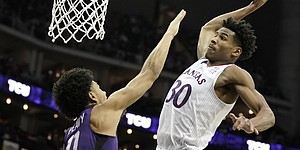 View a gallery of images from Friday night's game between the Jayhawks and Horned Frogs in the semifinal round of the Big 12 Tournament in Kansas City.

He had not scored as many points or taken as many shots since Kansas' game against Dayton on Nov. 26.

Martin played 11:47 in Kansas' quarterfinal win against West Virginia on Thursday but three minutes in the second half.

Coach Bill Self said Wednesday, following the Jayhawks' first practice at T-Mobile Center, that "it would be nice to give him some major minutes" during the Big 12 tournament.

Martin played the final 4:15 of the first half against TCU after Dajuan Harris Jr. picked up his second foul, a stretch of 6:25 midway through the second half and then the final 3:20.

"My knee's 100 percent, you know, so I just — I love this month. This month is for champions, and I enjoy being out there on the biggest stage and playing with the Kansas uniform, so I'm ultimately ready to go out there and play. I feel great, and whatever I can (do) to help, I'm willing to do."

No rest for the weary

Self said that playing in the title game is not as much of a disadvantage as it may be in conferences such as the Big Ten or SEC, which conclude their tournaments on Sunday.

Baylor, which lost in the Big 12 quarterfinals on Thursday, and Auburn, which was defeated Friday in the SEC quarterfinals, are like Kansas potential No. 1 seeds in the NCAA Tournament. They will have extra rest, whereas the Jayhawks will continue playing.

"You play on Sunday, turn around and leave on Tuesday, and Monday has to be an off day because your guys are exhausted," Self said. "There is an advantage of ending on Saturday, in my opinion. To me, it doesn't come into play. But if we played on Sunday and played on Thursday (in the first round of the NCAA Tournament), it would almost be like, 'Well, if it didn't go great on Saturday, that would be OK.'

"But I think the way our tournament is set up, I think it's set up perfectly for the four teams in the semifinals not to worry about that at all."

Kansas will be playing in the Big 12 championship game for the 15th time since the conference was established prior to the 1996-97 season. It has won the tournament championship in 11 of its previous 14 appearances.

Self upset by Martin's firing

Self said he was disappointed by Missouri's decision to fire coach Cuonzo Martin on Friday. Martin was 78-77 over five seasons and played a role, along with Self, in reinstituting the "Border War" series in men's basketball, beginning with an exhibition game that raised $1.75 million for hurricane relief in October 2017.

Martin's firing came one day after Kansas State and Bruce Weber decided to part after 10 seasons.

"I hate that," Self said. "I know schools and businesses have to make decisions that are hard to make, and many times unpopular — or, maybe they do it because it is popular. That's two coaches in the last two days that basically have been our biggest rivals, and I personally don't like that.

"I feel bad for Cuonzo. I did not know that (he was fired). I think he's a really good coach, I think he's a better guy, and I'm sure he'll land on his feet."

By scoring 22 points, Agbaji moved into the top 20 in scoring in school history with 1,554 points. He surpassed Calvin Thompson, who scored 1,548 points from 1983-86. With a pair of 3-pointers, he also moved into a tie for fifth, matching the 236 made by Kirk Hinrich from 2000-03. ... Redshirt sophomore forward Jalen Wilson matched a season high with five assists. ... Super senior Jalen Coleman-Lands played only 1:31, his least work in a game this season. ... Kansas improved to 49-12 all time in the Big 12 tournament, and it has reached a conference tournament championship game for the 23rd time. ... TCU was trying to reach a conference tournament final for the first time since 1997, when it lost 89-68 to Utah in the WAC title game.

Kansas' Bill Self, Ochai Agbaji and Remy Martin speak after beating TCU in the Big 12 semis by KUsports.com

KU senior Mitch Lightfoot on another big night by him & the mother of all highlights by Ochai Agbaji by KUsports.com

Calvin would have had so many more points if there had been a 3 pt line.

Baylor and Auburn both losing early in their tournaments, coupled with the dominance so far is making a stronger case for a 1 seed.

Martin made our offense effective in 2nd half when TCU slowly started to look like they were treating us like UT the other night.

"Self upset by Martin's firing" - my interpretation at first: Self was upset with Remy's missed (forcing) shots & layups... LOL..

So, I take it coach thinks Martin is worthy now, Matt? ;)

Those were two really good opportunities to play Martin big(ger) minutes and that should help him and this team moving forward. He still made mistakes, but he also made an impact and that should have Kansas fans at least a little excited.

We'll see if he gets the same type of run today vs. Texas Tech. I'd bet the under if you set the number at 10 minutes in the title game. But, if KU runs out and builds a big lead early again, it could easily go over.

Martin looks as good as he's looked since mid-December. So this is him, for better or worse, to the finish line.

Matt, you dare voice concern about Remy's play in the comments section??? You are Brave sir. ;))

My favorite line was your last few words - "this is him, for better or worse, to the finish line". Truer words have never been said.

Hey Rodney, how did you like Remy against Tech....lolololo

Should’ve taken the over. 2.5x your prediction. Couldn’t have been more wrong.

The same was true for senior guard Remy Martin, who played arguably his best game as a Jayhawk on Saturday, finishing with 12 points, four rebounds, four assists, three steals and zero turnovers in 26 minutes.

“I don’t think we would’ve won the game without Remy,” Kansas coach Bill Self said on the court after the win. “I thought he was great.”

"That's two coaches in the last two days that basically have been our biggest rivals, and I personally don't like that.

"I feel bad for Cuonzo. I did not know that (he was fired). I think he's a really good coach, I think he's a better guy, and I'm sure he'll land on his feet."

No mention of Weber. Point made, HCBS.

Back in the day, when Al McGuire saw too fancy of a play, he would say "too much French pastry"! That fits Remy to a T, please make the solid play and skip the spectacular. ROCK CHALK!

Dale - While not entirely off base, Coach Self did respond regarding Weber when he resigned, and then yesterday was responding to the new news regarding Cuonzo.

Edward and Robert - I think it was a month or so ago that Remy commented that Coach Self was the first coach to tell him no. I think that in part had a lot to do with somewhat limited output from him earlier in the season. He was still learning what is a yes. When playing at the pace they play at, so much is instinct and old habits are hard to break.

At the same time, this is championship season and champions have elite players making elite plays. It’s easier to see in football where a QBs % and errors are improved or corrected by a WR making an elite catch.

I think Coach Self has tweaked Coach McGuire’s comment to don’t make an easy play into a difficult play. No one is going to tell Ochai to stop dunking the ball though it’s pretty fancy. No one was telling USCs or Villanovas centers to stop shooting 3’s though some would consider those fancy as well.

Coach sees that elite ability and coaches to it, even before it manifests itself in positive outcomes. It’s why he stuck with TTaylor through growing pains, but eventually landed in the NCG. He commented on it being why he stuck with Dok when ou was intentionally fouling him (intention fouls should have been called). Unfortunately, we never got to fully see the fruits of that decision.

Remy is starting to come into focus on both ends of the court. Exciting times.

The fans love to watch Remy Martin play, but Bill Self cringes at times. I have to say I too shook my head a couple of times yesterday, because I have watch Self’s team since he arrived and know what he expects and when he will pull a player for making a mistake. Yes, Remy took some ill-advised shots too early in the shot clock, but he was engaged at both ends of the floor. Self is not used to having such a free spirt on the court. Remy is clearly a volume shooter and creator/entertainer and does not always play within Self's offensive schemes. My absolute favorite moment of yesterday's game was when Remy tracked down an airball and laid it in for his 9th and 10th points of the game. All smiles, Remy walked over to Self and gave him a hug. The expression on Self’s face was priceless and my first thought was that Self was saying to himself –“this cat is one crazy dude”. Remy is a free spirit, and it is fun to see him truly engaged for the first time in what seems like forever. The last time was against Dayton, yes sour ending, but a fan behind us yells out “we love you Remy” and he just grins and winks back at the fan. He seems to love to entertain the fans. The best thing so far from the Big 12 tournament outside of winning and advancing, is seeing Harris get some rest and Yesufu and Martin some meaningful minutes. Texas Tech’s head coach will rotate player(s) at every dead ball and keep his players fresh while slowing up the game. He will use 10 players and keep everybody fresh and playing hard on defense. On paper TTU should be favored by ~1.5 points, yet the oddsmakers have KU a 2.5-point favorite with the game in the high 60’s. First to 70 might win (67.6 % chance KU will win based on ESPN/s matchup predictor). As Self says if you show up you might as well win. Rock Chalk.

Martin is playing better and his emergence, now, really makes scouting film from the rest of the year pretty useless. Pretty cagey, if it works out.

Remy does provide another offensive dimension for the team due to his ability to change direction in a flash and seemingly get off a shot anytime he wants. He has a full offensive arsenal, and though he missed a number of shots last night, he was on target with all of them. It seems to me that he is the best ball handler on the team, but I will say that his jittery style makes me nervous to watch him, just wondering what he is going to do next and worrying that he is going to throw a wild pass. But if we get to play a few more games, he could be a factor.