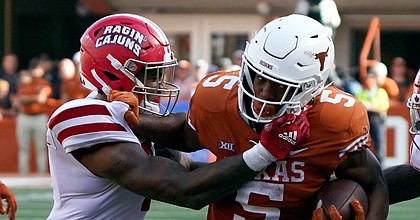 Lorenzo McCaskill, a second-team all-Sun Belt linebacker last season at Louisiana, has decided to transfer to Kansas and will be eligible to play this season.

McCaskill, who is 6 feet and 220 pounds, led Louisiana with 84 tackles last season while playing in 13 games. A native of Detroit, he spent his first season at Holmes Community College in Goodman, Mississippi, before transferring to Louisiana in 2018 and will have just one season of eligibility remaining.

He is the second linebacker who has decided to transfer to Kansas in the last month. Tristian Fletcher, who was a freshman last season at Trinity Valley Community College, did so on June 11 during an official visit.

"I appreciate KU and the coaching staff for the loyalty I have seen already," McCaskill wrote on Twitter. "For that, I will give this program all I have."

McCaskill started 12 games last season at Louisiana, which reached a bowl game in each of his four seasons and was the Sun Belt champion in 2020 and 2021. He was the mike linebacker for the Ragin' Cajuns who had a base 3-4 defense but often ran 3-3-5 principles with a hybrid outside linebacker/defensive back.

He decided to transfer in early January, not long after coach Billy Napier left for Florida, and Kansas offered him a scholarship on June 14. He initially received interest from several Power 5 schools, including USC, Tennessee and Missouri, but said shortly thereafter that he was looking for a place where he can play immediately.

McCaskill grew up as a neighbor of Kalon Gervin, the former Michigan State cornerback who transferred to Kansas before the spring semester.

He's the third Detroit native to transfer to Kansas this offseason, including Gervin and former Purdue safety Marvin Grant, and will join linebackers Rich Miller and Cornell Wheeler, who are already on the Jayhawks.

Linebackers coach Chris Simpson, the assistant who is responsible for recruiting the Detroit area, originally tried to recruit McCaskill to Buffalo when he was at the university with coach Lance Leipold.

Milfort, who has been heavily recruited by defensive tackles coach Jim Panagos, was scheduled to take an official visit to Kansas on June 17 but called it off days before traveling. The only school he visited officially was NC State, which he saw on June 3.

A three-star prospect, he has received nearly two dozen scholarship offers, most from AAC, Conference USA, and Sun Belt schools, though Iowa State and Pittsburgh also extended him one. Kansas offered Milfort a scholarship on Feb. 19.

Milfort had 78 tackles, including 51 for loss, and 4.5 sacks last season as a junior. He also competes for his school's weightlifting team and in April finished fourth in the snatch in the Florida Class 3A championships at 225 pounds.

KU's version of the "Motor City" engine is "firing on all cylinders"!

Before I get too excited, I do realize he only has 1 year of eligibility.

KU's linebacker depth and athleticism should be vastly improved.

I think at least one of the newer OL is from Detroit, or maybe just Michigan.

There should be lots of competition at LB.

It would be great to add a weightlifter, TFL-machine at DT. We’ll be losing lots on both lines after this year. Quite a few young OL, but not so much on D.

Continuing to upgrading the linebacker positions is a must to make the defense more competitive in Leipold's defense schemes. Glad to see the coaching staff took this on as a priority for the 2022 season. KU should have more competition at these positions for 2022, which can only help all the players get better.