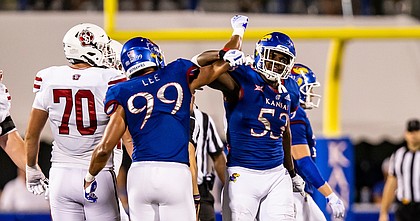 There will be something a bit different about Caleb Taylor the next time he plays in a college football game for Kansas.

The 6-foot-2 defensive tackle has put on nearly 40 pounds since early last season, and he believes that extra weight will leave him better prepared for the rigors of the game come this fall.

Taylor weighed 258 pounds prior to a loss at Duke on Sept. 25 — the third of four games he started as a redshirt freshman. By late March, he had weighed in at 297 pounds, the result of several weeks of proper dieting and a strength and conditioning program meant to help him better play his position.

"It took a lot of work, honestly," Taylor said. "Going into the weight room after practice, getting extra reps in, getting extra sets, being more conscientious of everything that I was putting into my body — but really the biggest part of it was the weight room, and since I did it like that, I was able to gain that much weight but not lose any strength, speed, anything. So, it's good weight. I feel good. I feel great, actually, and I'm glad I got it. I feel way better with it."

Taylor, who finished with 14 tackles, played in every game for the Jayhawks last season but did not start again after a loss at Iowa State on Oct. 2 as the team tried to determine the best way to rotate its defensive tackles.

He only played football for three years before enrolling at Kansas — and even then only played defensive end — so he found the move to the inside of the line to be a different type of challenge.

"I didn't really get to become a tackle until you know, last year, and then honestly, I like it," he said. "A lot of it's the same, but a lot of it's different. It's a lot more physical. Everything's a lot heavier and it happens a lot quicker, but there's less to think about. It's more about physicality. It's more about knowing what to do and being confident to execute it. Physically, I can handle it now, so it feels good."

Taylor, who is from St. Louis, figures to again compete for snaps with Sam Burt, Eddie Wilson, Kenean Caldwell and Caleb Sampson. They've been working with a new position coach in Jim Panagos, who was hired in February; Panagos and new defensive ends coach Taiwo Onatulo replaced Kwahn Drake, who remained from former coach Les Miles' staff and is now the defensive line coach for the Michigan Panthers of the USFL.

Burt said Taylor's offseason transformation has been noticeable, and he's hopeful that belief will translate to the field beginning with the Sept. 2 home opener against Tennessee Tech.

"He's killing it on and off the field, whether it's in the weight room or in practice," Burt said. "He's really developing and coming into himself, and a lot of that is us working as a group and Coach P instilling some confidence into us and allowing us to play fast and allowing us to show our true colors. For Caleb, it's working out really well. He's knocking 'em back and getting a good pass rush and he's really coming along. It's going to be great this year."

Taylor said early last season that he found it hard to believe he had attained a significant role for the Jayhawks so quickly. Now, however, he said that when he reflects on last year, "I feel like everything is happening perfectly."

"Being a 258-pound defensive tackle, that might be tough sometimes because the results of what happened are not always matching up with in your mind what you want to happen or how you saw stuff going," Taylor said. "But you know, putting the weight on and playing better and feeling better, that belief just became so much easier, so last year just taught me always to believe in myself and take my chance whenever I get it."

297 sounds so much better. Hopefully, we’ll get to a place where we can redshirt the freshmen, though probably not next year. Sam Burt, Eddie Wilson, Kenean Caldwell and Caleb Sampson are all seniors and supers?

The decision to separate the coaching assignments for defensive tackles and defensive ends is certainly unique!

If you add Ronald McGee to the mix, we should have 6 tackles competing to play.

As Lance has said, "we need to have competition within our own team".

Even after the late season surge last year, I think we will play a lot of teams where in the middle of the game will think “wait a minute, this is Kansas we’re playing? How can they be this good?”

Caleb is just one example. There is a huge difference that comes with 50 pounds of good weight. And with our talented transfers coming in we are going to surprise a lot of people.