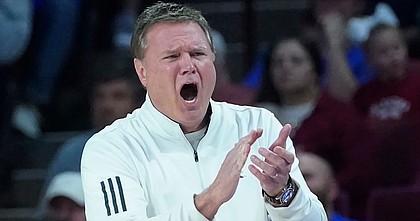 The Kansas men's basketball team will face a series of difficult opponents as it attempts to defend its national championship with games against Duke, Kentucky, Indiana and Missouri included on the schedule for next season.

The schedule, finalized Tuesday, includes the first game of a home-and-home series between the Jayhawks and Hoosiers that will be played Saturday, Dec. 17, at Allen Fieldhouse.

The two legendary programs last played in Honolulu in the 2016-17 season opener and have not played in Lawrence since Kansas won 86-83 in overtime on Dec. 22, 1993.

The Jayhawks will play Duke, which they last faced to open the 2019-20 season, in Indianapolis as part of the 12th annual Champions Classic on Tuesday, Nov. 15.

They will also face Missouri and Kentucky for the second consecutive season, though both games will be on the road. The game against the Tigers, the second of a six-game renewal of the longstanding rivalry, will take place on Saturday, Dec. 10, and the Jayhawks will face the Wildcats as part of the SEC/Big 12 Challenge on Saturday, Jan. 28.

Those four marquee nonconference games are in addition to Kansas' participation in the eight-team Battle 4 Atlantis, which will take place in the Bahamas over Thanksgiving weekend. The Jayhawks will play three games in three days, and although the brackets have not been finalized, the other schools set to compete in the event are Butler, BYU, Dayton, NC State, USC, Tennessee and Wisconsin.

Kansas will open the season with an exhibition game against Pittsburg State at Allen Fieldhouse on Wednesday, Nov. 2, then will play its first regular-season game against Omaha on Monday, Nov. 7.

It will host North Dakota State on Thursday, Nov. 10 and Southern Utah on Friday, Nov. 18, then will face Texas Southern, its first-round opponent in the NCAA Tournament in March, at Allen Fieldhouse on Monday, Nov. 28.

Dates, times and locations for Kansas' Big 12 games have yet to be finalized.

"Once again, we have a nonconference schedule that should prepare us for what will be another strong Big 12 schedule," Kansas coach Bill Self said in a statement. "This is a very attractive home schedule with games against Indiana and Seton Hall. Also mixed in is Duke in the Champions Classic in Indianapolis and road games at Missouri and at Kentucky. The Battle 4 Atlantis is a stacked field that includes USC, Tennessee and Wisconsin. Those, along with the Big 12, makes this a very competitive schedule, and if we do well, it will enhance our chances for another high NCAA Tournament seed."

Kansas went 34-6 last season, including 14-4 in the Big 12, en route to Big 12 regular-season and tournament championships and the NCAA title.

It is an insult to include Missouri with those other excellent programs.

Zac the real question is will we be wearing Sunflowers at the KSU game? The flower game was a real hit last year.

When will Late Night be?

"One of these things is not like the other". LOL

B4A will be tough all 3 days win or lose. That group is loaded across the board.

Seton Hall is led by Cinderella from StPete. It will be interesting to see what he can do with more resources at his alma mater.

Hopefully we can continue to stretch the W gap.

I wonder how our noncon SOS compares nationally? It always seems so strong.

Schedule is good. Our NonCon is typically top 20 usually. We don't play a ton of division II or directional schools all that often. We usually play a lot of mid-tier power 5 teams, a couple elite power 5 teams and then sprinkled in with what's left on the schedule with solid mid-majors typically.

The Seton Hall game jumped out at me for sure. They snagged Shaheen Holloway right after the St. Peters amazing Cinderella run, & I wouldn't be surprised to see the Hall in the top 10 before the end of the season. This should be a real tough game.
Misery? not so much, but it will be fun to kick their tails in Columbia.
USC will also be very tough if we get them in the B4A.
Personally, I hope they wear the sunflower uni's for the KSUck game every year....
I wouldn't be surprised in our non-con SOS is in the top 5 again.

So with one exhibition game does that mean another closed scrimmage with another school like last year?

Only one exhibition game huh? What a great time to start playing the University of Central Missouri for the Phog Allen Cup. They are DII so it would count as a second exhibition game.