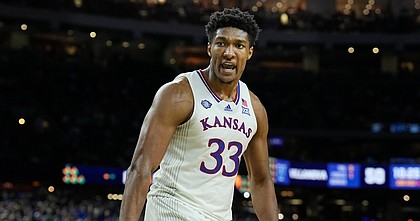 McCormack has become the most recent Kansas player to head to the NBA as he has signed an Exhibit 10 contract with the Minnesota Timberwolves.

He said he chose to join the Timberwolves over offers from other teams because of their longstanding interest in him, his belief that he will fit well in their system and his comfort with the team during his workout last month.

"I've definitely got the mindset of ready to get to work," McCormack said Saturday. "I liked when I did work out with the team. I enjoyed it. I kind of have a nose-to-the-grindstone mentality right now and just bringing forth everything I have to bring as a player and a person."

The Timberwolves were one of the first teams to reach out to McCormack early last month, but he wasn't able to attend a workout until May 24. He participated in the G League Elite Camp in Chicago in mid-May and also worked out for the Charlotte Hornets, Washington Wizards, Los Angeles Lakers, Sacramento Kings and Atlanta Hawks in the weeks leading up to the NBA Draft.

Two of McCormack's former Kansas teammates, Ochai Agbaji and Christian Braun, learned their futures on Thursday night during the draft. Agbaji was selected by the Cleveland Cavaliers with the 14th pick and Braun was taken by the Denver Nuggets with the 21st pick.

He said he was "ecstatic" that they were drafted, and when he didn't hear his name called, he turned his focus toward landing a contract somewhere.

"I just came out with the mentality that I understand the position I was in and understand that teams use all the picks as far as who they wanted, so now it's just the mentality of proving myself," McCormack said. "I've done it before and I can do it again. That's all it is."

Whereas Agbaji and Braun will sign guaranteed contracts that will be worth between $2 million and $3 million in their first year, McCormack's will not be. An Exhibit 10 contract, introduced in 2017, is a non-guaranteed one-year deal that allows a player to join a team for the NBA Summer League and training camp and, perhaps, beyond.

Should that team be impressed with the player's performance, the contract could be converted to a two-way deal that would enable him to play in the NBA or in the G League. And, if the player were to remain in the G League for 60 days, he would earn an additional bonus, separate from his G League or prorated NBA salaries, of up to $50,000.

McCormack was named to the NCAA Final Four all-tournament team and the Big 12 third team last season as the Jayhawks won the national championship. He averaged 10.6 points and seven rebounds in 21.9 minutes per game and led the Big 12 with 11 double-doubles.

During his workout for the Timberwolves, McCormack learned that they like their post players to be able to defend the guard and roll man on screens and trust them to be able to move the offense in transition — "all those little things that keep the offense flowing and moving," he said.

"That's why I felt natural, kind of in the element. I think my natural style of play gelled with theirs."

Minnesota went 46-36 last season and reached the playoffs but was knocked out in the first round by the Memphis Grizzlies. In addition to three-time All-Star center Karl-Anthony Towns, the Timberwolves have Jarred Vanderbilt, Jaden McDaniels and Naz Reid in their frontcourt, and they drafted Auburn center Walker Kessler with the 22nd pick.

McCormack's first days with the Timberwolves will come in the NBA Summer League, which begins July 7 and is held in Las Vegas. Their first game, coincidentally, will be against Braun and the Nuggets on July 8, and he said he's already looking forward to it.

Since his NBA workouts ended, McCormack has been back home in Norfolk, Virginia. Now, with his future mapped out, he said he's beginning the process of packing and getting ready to move.

"It's a blessing to take part in the opportunity, honestly," McCormack said. "Even though you don't hear your name called (in the draft), it's still a blessing to have an opportunity. I'm thankful and now, I'm really just locked in and just kind of making the most of it."

Get that foot fixed up and show them what you can do, Big Dave!

So happy for him and wish him the best.

Good luck David. The NBA is a "whole nother level". The Jayhawk nations will always appreciates and remember your contributions to KU. We wish you success in your professional career.

It’s not millions but not a bad first job. Tougher with Towns, 22nd pick, and others in front, but it’s sorta like March/April. If you go far enough, all the competition will be good. David has the potential.

DM's NBA journey was never going to be easy. He has an opportunity now to prove he belongs somewhere in the league.

If the last two games on the biggest stage are any indication I like his chances.

Unfortunately, the Summer League is a poor place for bigs to show off their skills. The guards are trying to show what they can do and that means limited passing to bigs (they'd rather drive or shoot). Best of luck to him though.

It doesn’t seem likely that any team that picks him up is going to run their offense through him in the low post the way that we did in March/April. Guessing he’ll make the team because he sets good screens, moves the ball, gets rebounds, …. All the little stuff that Coach preaches though it won’t show in newspaper, but what the scouting staffs will recognize and value.

He sorta needs to be the nba version of Landon Lucas.