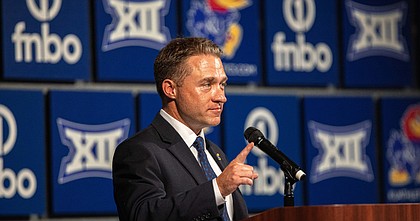 Details of new Kansas baseball coach Dan Fitzgerald’s six-year contract became available late Thursday night and included among them was a clause outlining what the parties referred as “Incentive Year Seven” for participation in the NCAA Tournament.

Currently written as a six-year agreement worth $3.16 million total, the contract states that Fitzgerald is entitled to a one-year contract extension, known as “Incentive Year Seven,” in the event that the baseball team achieves and Fitzgerald attends and coaches the team in the NCAA Tournament during the term of the agreement. 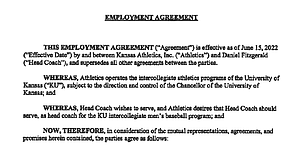 For clarification purposes, the contract spells out that Fitzgerald’s contract would be extended for one additional year — through June 30, 2029 — if the Jayhawks reach the NCAA Tournament during the 2024 season.

According to the contract, “Incentive Year Seven” is only available for the first time Fitzgerald reaches the NCAA Tournament with Kansas during the initial agreement.

Kansas last made the NCAA Tournament in 2014.

In addition to the potential extension, Fitzgerald’s contract includes bonuses for the following:

• One month’s additional salary for a Big 12 tournament championship

• One month’s additional salary for a World Series appearance 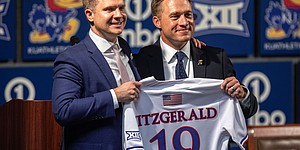 If Fitzgerald were to be terminated for cause, KU only would be on the hook for what it owes him in his contract to the point of termination and nothing more.

Section 12-C of the contract outlines the definition of cause, which includes but is not limited to serious criminal conduct, major violations of NCAA or Big 12 rules, violation of KU’s policies on discrimination, harassment or retaliation and more.

This is fair. If he get's into the NCAA tournament a couple of times in that 6 year period, he'll get a 1 year extension and if the program is poised to reach again soon or the following season, he'll get a new, longer contract with higher compensation guarantees, especially if they win the Conference one or both of the times they get into the NCAA tourney. And if they get to the College World Series, they can agree to a new contract before this one expires.