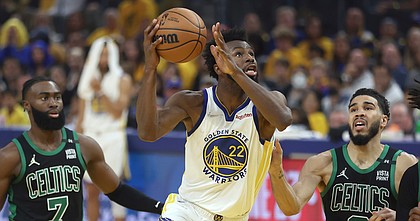 If the Golden State Warriors wind up winning this year’s NBA title, former Kansas standout Andrew Wiggins will go down as one of the biggest reasons why.

On Monday afternoon, KU coach Bill Self called Wiggins “Golden State’s second-best player in the playoffs.” On Monday night, Wiggins was by far the team’s best player, carrying the Warriors to a Game 5 win to give Golden State a 3-2 series lead heading into Game 6 on Thursday night in Boston.

Wiggins scored 26 points and grabbed 13 rebounds on Monday night. That, after scoring 17 points and grabbing a career-high 16 boards in a Game 4 win on Friday night. Broadcaster and former NBA coach Jeff Van Gundy called those “the two most important games of his life,” and it marked just the second time that he had delivered back-to-back double-doubles in his pro career.

According to CBS Sports, Wiggins joined Shaquille O’Neal (2000), Kevin Garnett (2008) and Kawhi Leonard (2019) as just the fourth player to score 25 or more points and grab 12 or more rebounds in an NBA Finals game without a single turnover.

“People forget that Wiggs has averaged 19 a game for his career,” Self said Monday. “He’s had a great career.”

And he’s now just one win away from adding a pretty important prize to it. Think about this: If the Warriors win one more game in this series, Wiggins will win his first NBA title in the same season that he started his first All-Star Game.

Based on how the last two games went, it’s not entirely out of the realm of possibilities that he could even be named the Finals MVP, though he’d have to be sensational for a third straight game, while Steph Curry would have to struggle again, for that to happen.

This one almost is starting to take on the feeling of Ochai Agbaji and David McCormack at the Final Four. Most people understood why Agbaji was named the Most Outstanding Player, but many of those same people also thought McCormack was awfully deserving of the MOP honor, too.

It’s been a long road to this point for the former No. 1 overall pick, but there’s no denying that he has looked ready for the biggest stage in basketball.

After being traded by Cleveland shortly after being selected at the top of the 2014 draft — and then spending a few forgotten years scoring but doing little else in Minnesota — Wiggins has found a home in the Bay Area. Not only has he played his role as the team’s third or fourth offensive option to perfection, but he also has found his confidence again.

During Monday’s Game 5 broadcast, television analyst Mark Jackson said it looked as if Wiggins was back in college — or even high school — where he knew he was the most athletic and most dynamic player on the floor every night and believed that no one could stop him.

It’s been so much more than that, though. He has been Golden State’s best defender, taking on a number of nasty defensive assignments throughout their playoff run, and he has done it all with the poise of a veteran who has been there before even though he hasn’t.

During the on-court postgame television interview following the game, Wiggins was smiley but serene.

“Man, I’m just trying to do every little thing to win,” he said. “If I’ve got to score, rebound, defend, anything I’m asked to do on the court to help win, I’m going to do.”

That includes, of course, dropping a highlight at any given point. On Monday, that came in the form of a ferocious one-handed jam down the lane that essentially signaled the end for Boston.

Asked what he thought the dunk’s message was, Wiggins smiled and said: “We’re here. We’re hungry. We want this.”

With former KU point guard Aaron Miles on the Boston bench as an assistant coach, Self noted that he’s happy for both former Jayhawks and added that he had enjoyed watching both succeed at the highest level of basketball.

“I don't want to say I hope one over the other wins,” Self said. “But I'd love to see it go seven (games) and (have) Wiggs be MVP of the series.”

If he is, there's been talk in the past about that potentially being enough to have Wiggins No. 22 jersey raised to the rafters at Allen Fieldhouse. Even just being picked No. 1 overall eight years ago has inspired some to say he belongs among the greats at KU's home venue.

Time will tell on all of that. For the former to matter, though, Wiggins and the Warriors still have work to do.

Game 6 is set for 8 p.m. central on Thursday night in Boston.

This is just so wonderful. I am so happy for Wiggs to get this far.

Now, if we can get Embiid into the finals next year with a possibility at a shot for MVP.

Watched the game and heard the announcers twice refer to Wigg`s playing days in college at....................Minnesota. Obviously, they meant his first true NBA team, but it never got corrected, He was awesome. It's always heartwarming to see ex-KU players doing so well.

Where was this effort from Wiggins when we needed him against Stanford in the 2014 NCAA Tournament?

So I'll say it a different way. First, I always support former Jayhawks, but never felt that AW was invested in KU at all. Just a stepping stone for him, I just never got the feeling he really was pushing hard to win, and yes, in the tourney he was absent like it didn't really matter.

Nothing against him, but rooting for Boston.

hopefully hopes and prayers work better for you than as solutions to everything else they are used for.

I think that this passage does indicate that Christians in America bear the burden of the current state of our country.

"If my people, which are called by my name, shall humble themselves, and pray, and seek my face, and turn from their wicked ways; then will I hear from heaven, and will forgive their sin, and will heal their land." II Chronicles 7:14

Written about the nation of Israel during a time when they seemingly had one wicked king after another; it could easily be about American Christians today, who need to 1. humble themselves, 2. pray, 3. seek God, 4. turn from wickedness. America would be a much better place if Christians were more Christ-like, and if more Americans were Christians.

So, I will take this as a lesson to myself before the next time I spout off on whomever I feel is a self-righteous whatever. I still don't need to know the political leanings of our entertainers.

Christians don't own or even have a corner on morality or ethical behavior. If Christians resembled Christ's teachings more, that would probably be a positive. But if no Americans were Christians, and yet pursued ethical, thoughtful positions, evaluated evidence fairly and by a holistic viewpoint of benefit and harm for everyone living in their communities and nations, and respected the views of other people who were also largely trying simply to live their own lives, that would also probably be a better America than the one we live in today. You have no greater or less burden than others, and claiming so is the opposite of the humility you claim to need.

The humility of a Christian actually comes from knowing that we are talking about accomplishing things that only God can do. People cannot fix our country.

As a Christian I believe that God's spirit lives inside of me. It's a wonderful thing. It also means that anything good that I do is being done by Jesus Christ through me.

We will not come to an agreement on this topic, but I respect your opinion and I hope that we can in fact all try to be more civil and more loving toward eachother. It may not be the solution to everything, but it will help more so than any law that our congress is ever going to pass under either political party

He was a freshman for goodness sake!!! (As were Embiid, Selden, Lucas, AND Frank Mason. Perry Ellis was only a sophomore. They were BABIES! Imagine if they'd had one more year together.

Steve Kerr's passion and outspokenness is personal. As you well know his father was assassinated by a militant group when he was only 19. His being raised in Beirut, Egypt, and Pacific Palisades shaped his world view and his understanding and respect for different cultures, beliefs, and personalities. It forged a great compassion for those who have very little - especially a voice.

Your own character is exposed by disparaging his. Pastor Landon once again spreading the gospel of hate.

Loved Wiggins when he was at Kansas. I always thought he tried hard. What I saw was that he was not as mature as some of the freshman we see at KU and he was not as good as we thought he was going to be. That said he was still very good and he earned the honors that he received including the #1 pick in the draft.

I was a big Chicago Bulls fan in the 90s and loved Steve Kerr and his role on that team. He has obviously done a terrific job coaching the Warriors; I would support him if he weren't such a self-righteous, virtue-signaling (fill in the blank). I'd rather not know how sports and entertainment celebrities feel about political issues, and that's all I have to say about that.

I also hope the Celtics win games 6 and 7.

i know, i agree, i wish we could keep celebrities (bad actors) and failed businessmen turned celebrity out of the oval office.

Reagan and Trump come to mind.

if McConaughey or Dwayne Johnson or Oprah or whomever would actually run for office then I will listen to what they have to say. They can talk about running all that they want but until they commit to getting their name on the ballot then their opinion matters no more to me than anyone on this forum. They certainly are free to speak their mind and have their voice or whatever. If they want to publicly take sides that is their prerogative and has nothing to do with me.

One and Done!
Wish there could have been more. But we knew up front. Hats what you get. So, be glad.

I always thought that Wiggins was one of the more engaged OAD players that we've had. It seems like the 'disinterested attitude' is simply one that people expect of OAD players, and so it's what they perceive. Embiid's injuries and Tharpe's inability to perform at a high level as the point were the larger contributors to the problems that season and post-season, in my opinion.