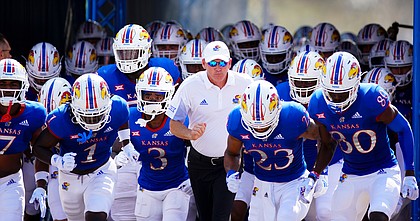 Tristian Fletcher, a linebacker who spent last season at Trinity Valley Community College, committed to play for Kansas on Saturday during his official visit and will be able to join the team before the start of the season.

Fletcher, who is 6 feet and 215 pounds, had been committed to Sam Houston State but reconsidered once he received a scholarship offer from Kansas on June 3. He was also being recruited by Louisiana Tech and Troy.

As a full qualifier, Fletcher will be able to join the Jayhawks this summer. He has three years of eligibility remaining, plus a redshirt.

A native of Cypress, Texas, just northwest of Houston, Fletcher was a running back at Cypress Ridge High who moved to linebacker during his senior season.

Kansas hosted several of its top recruiting targets for official visits this weekend, though Fletcher was the only college player in attendance.

It also received a commitment Saturday from Surahz Buncom, a wide receiver from Chula Vista, California, who is a part of the Class of 2023.

Fletcher is the 14th player to transfer to Kansas since the end of last season, the fourth from a junior college and the sixth to do so since May 1.

Although the Jayhawks added linebackers Eriq Gilyard and Craig Young, who transferred in for the start of the spring semester in January, Fletcher is the only one who plays the position in the team's most recent wave of additions.

A JC with 4 years. Very different than most JCs, though similar to others from previous staffs.

Finding the players that had injuries, position changed, or from small schools and didn’t get the same recruiting coverage seems to be a key for success at the less than elite programs.

Maybe he plays right away, but I’m guessing 4 games or less, and special teams, so he can spend a year building his body for Big12 competition and get 3 more full seasons.

Looking at the roster, it seems that we have a pretty good, experienced 2-deep at LB, but need to develop the next generation; freshmen and sophomores. Only one RFresh. All the more important commitment.

DLine is the other position group needing young blood and the difference between champions and others.

Great news. Excited to have you here. Welcome to The Hill!

What in the Sam Houston is going on here? Rock Chalk!

Tristian could be the next Nate Betts or develop into the next London Fletcher. Double Rock Chalk!!