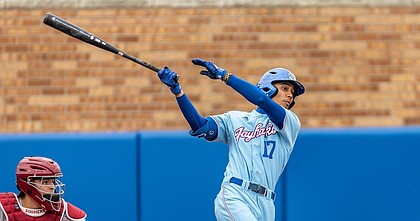 The shortstop has decided to transfer to Tennessee nearly three weeks after he chose to leave Kansas following the retirement of coach Ritch Price.

Ahuna batted .396 with a .479 on-base percentage while starting all 53 games for the Jayhawks as a sophomore this season. He hit eight home runs, tied for the team lead with 16 doubles, was second on the team with 42 runs and 48 RBIs and finished the season on a 20-game hitting streak.

Ahuna, from Hilo, Hawaii, was named to the all-Big 12 first team in May, making him the first Kansas infielder to earn such honors since catcher Michael Tinsley in 2016.

Price retired after 20 seasons on May 22, a day after the Jayhawks finished the season 20-35, including 4-20 in the Big 12, and were the only team to miss the conference tournament.

Ahuna said in mid-May that he would never consider leaving Kansas because of the relationship he had built with Price, who is a close friend of Ahuna's father's college baseball coach.

"I could be anywhere in this country, but I love this place," Ahuna said then. "This place is good. I love the guys. I love the place. I love the coaches. No doubt. Growing up, exposure was a key thing. I didn't get much, but I'm loving it here."

Before the season ended, several Major League Baseball scouts told Price that Ahuna had a good chance to be a first-round pick when he is again eligible to be drafted next spring. He would have been the first Kansas player to be chosen in the first round.

Instead, he heads to Tennessee, which spent nearly the entire season as the No. 1-ranked team in the country. The Volunteers went 49-7 during the regular season, won the SEC tournament and are facing Notre Dame in the best-of-three Super Regionals, which began Friday with the Fighting Irish winning 8-6.

Ahuna will play this summer for the Falmouth Commodores of the Cape Cod Baseball League, long considered the most prestigious league for collegiate baseball players. Games are scheduled to begin Sunday.

I can certainly understand him transferring out.

But, truly sad to see him leave Lawrence and University of Kansas and the Jayhawks baseball program......

Enjoyed the previous article about him. Sounds like a really quality young man who is easy to cheer for - even if he’s going to Tennessee.

Hope our next coach can recruit many more like him.