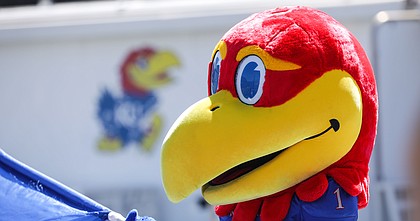 For example, a safety at Ridge Point High in Missouri City, Texas, wants to intercept 10 passes next season as a senior — a number he thinks he can achieve because he had three in one game last season.

He also wants to be part of the foundation that restores the Kansas football team to prominence.

Davis became the Jayhawks' first player in the Class of 2023 on Monday when he called coach Lance Leipold, defensive coordinator Brian Borland and running backs coach Jonathan Wallace and told them he was accepting their scholarship offer.

A 6-foot-1, 180-pound safety from outside Houston, Davis chose Kansas' scholarship offer over nearly 20 others, including Tennessee, Arizona, Arizona State, Colorado and Washington State. He has not yet been evaluated or graded by Rivals.com or 247Sports.

Until Monday, Kansas had been the only Big 12 school that had not secured a commitment from someone who is set to begin his senior year of high school.

He also made unofficial visits to Tennessee and Arizona during the spring, but he said he kept thinking about what he saw and who he met while at Kansas during and after those trips.

"It wasn't just the place," Davis said. "It was the people. The people that surround the place are really cool and some of the nicest people that I've ever met in my entire life. They're good people to be surrounding yourself with."

Davis was the only junior voted to serve as a captain last season and is a physical playmaker, said coach Rick LaFavers. He plays several roles in Ridge Point High's scheme, which often uses three high safeties.

LaFavers said Davis could end up with a playing weight of around 210 pounds in college and is "just a big hitter."

"I'm not saying he's this caliber of player, but this role of player, like a (Troy) Polamalu where he's just all over the place," LaFavers said.

Davis comes from an athletic family. His mother and father played college volleyball and basketball, respectively, and his older sister, Tiana, played volleyball at UTSA as a freshman last season. He enjoys photography and wants to study kinesiology at Kansas so he can continue to be around athletics once his time playing football ends.

Although Davis is the first player in his class to commit to play for the Jayhawks, their last three additions have also been safeties. Purdue's Marvin Grant, Eastern Michigan's Jarrett Paul and Palomar's Jalen Dye all decided to transfer to Kansas last month and will join the team for this season.

Kenny Logan, who led the Big 12 in tackles last season, should once again start as a senior in the fall. Grant, who will be a redshirt junior, likely will join Logan as a starter, with holdovers O.J. Burroughs, Edwin White-Schultz and Jayson Gilliom all in the mix to play as sophomores.

Davis' commitment may not be the only one this week for Kansas. Several players, including a pair of coveted in-state prospects in Free State offensive tackle Calvin Clements and Highland Park wide receiver Tre Richardson, are scheduled to begin their official visits on Saturday.

Among that group is Surahz Buncom, a wide receiver from Mater Dei Catholic High in Chula Vista, California, who narrowed his choices to five schools on Monday and said he will make his decision public on Saturday.

Davis said he has already heard from players who are interested in Kansas and has been trying to convince them to join him in committing to play for the Jayhawks.

"If I'm going to an organization or somewhere, I want to be part of what they're trying to pursue, and that's greatness," Davis said. "Once I put my name out there and I'm committed, I'm committed. I'm not going back. No decommitment. None of that. I'm investing my all in this."

Great news. Welcome to The Hill!

I hate recruiting. This guy will also be the first to decommit.

Were you also the person that said Jalen was gone?

Decommitments have been a part of recruiting, and I think this staff has lost one. It seems worth noting that this staff didn’t lose Young even when the coach that he was following moved on. They haven’t lost nearly as many as previous staffs did that led to the jaded memories.

Very good points. I also am happy I don't live my life with a pessimistic outlook. That must be a sad life. (Not talking about you, Dirk, obviously).

Pretty impressive offer list for a guy who hasn't been rated by Rivals. Looks like a great kid to kick-off our high school recruiting. Let's hope that it is a sign of good things to come.

Hey Dale you might not live your life with pessimism but you do live it attacking others, which is equally as bad. Stop trying to look at the bad in others and start appreciating that everyone has something to offer.

Or maybe it’s just the black yang of reality?

Dale - I appreciate your comment though I am fully aware that there’s definitely a deep root of sarcasm which does have a negative perspective. I do try to keep it in check.