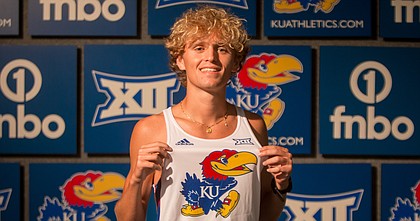 Fittingly, it was an all-star event that showcased some of the best talent in the Midwest running a true mile in St. Louis, Missouri.

Even more appropriate was the fact that the HOKA Festival of Miles race for the Lawrence-born future Jayhawk came just a few days before legendary Kansan Jim Ryun is set to be inducted into the United States Track and Field and Cross Country Coaches Association Collegiate Athlete Hall of Fame.

Newkirk, who attended Corpus Christi Catholic School through eighth grade before finishing at Hayden High in Topeka, has a long way to go before he reaches Ryun status. After all, the Wichita native and former United States Congressman, was a five-time NCAA champion, a six-time world-record holder and the first high schooler to run a sub-4-minute mile. But the parallels between the two, from native Kansans to Jayhawks to passionate and dominant runners, are hard to overlook.

Newkirk has yet to meet Ryun, but he said he looks up to him and former KU star Bryce Hoppel and hopes to someday have interactions with both of them.

“Definitely in the next couple of years that’d be a super-cool thing to achieve,” Newkirk said of both meeting the two KU legends and potentially breaking the 4-minute mark in the mile. “But it’s a pretty cool story, just being from here and going to KU like (Ryun) did. It’s awesome and I’m excited to be a part of that.”

Like Ryun’s, Newkirk’s high school career was packed with success. He was a force on the Class 4A cross country scene, winning state during his junior year. And he recently capped his Hayden career by sweeping the top spot in three events at the state track meet in Wichita, setting a pair of records in the process.

“I was kind of aiming for that my whole season,” Newkirk said. “I was definitely going for that state record.”

No stranger to winning, Newkirk said finishing with such a strong showing was a highlight for him because it came in just his second trip to the state track meet. After competing as a freshman, Newkirk missed out in 2020 because of the pandemic and did not run in 2021 because of injuries to his left foot and hip.

“There was definitely a ton of relief after I did that,” Newkirk told the Journal-World on Friday. “There was a lot of anxiety going into that meet, for sure, but it definitely was a storybook ending and not a lot of high schoolers get that kind of ending to their careers.”

He ran 4:11 flat on Thursday night to finish 11th out of 15, but said he was mostly just glad to enjoy the experience.

“It’s been a long season for me mentally,” he said. “And I think I was just kind of ready to get the season over with, you know. But it was super cool. There’s a lot of nice gear they give you and it was fun to run. It’s a great event.”

Newkirk never thought he’d be running in events like that or setting state records. When he first started running he said he was just like any other kid who was out there enjoying the freedom of movement and having fun with friends.

But a passion developed along the way and that led to the kind of fierce determination that inspired him to push his mind and body to great heights.

Newkirk signed to continue his running career at the University of Kansas last December, and he said this week that he is eager to get the next chapter started after enjoying a bit of his summer first.

That will start next week, when he plans to take one full week off of running to let his mind and body recharge. Any more down time than that, he said, can have a negative effect. Besides, with running being his passion, he admitted that going too long between runs was “kind of weird.”

After the week off, it’s on to easing back into things and getting his mind and body in proper shape to attack his freshman season at KU.

He plans to run cross country as well as indoor and outdoor track for the Jayhawks and said he was thrilled to be joining a program with so much tradition.

“Of course I’ve always loved KU, being from Lawrence,” he said. “But I wasn’t really thinking I want to stay home. I was open to a bunch of ideas. The best fit just happened to be home. It just felt right.”

Wherever that takes him from here, Newkirk said he plans to keep the same approach that got him to this point. Set a goal and achieve it. Set another one a little lower and knock that one down, too.

Newkirk also said signing with Kansas felt like the right next step in his goal of squeezing every bit of success and every shaved second out of his legs as he can get. That includes massive goals like Big 12 championships and the Olympics.

Enjoy your week off and best wishes for growing at KU. Conjures up lots of memories.

Had to look it up. I thought - how in the world could there be a track hall of fame that DOESN'T have Ryun in it. It's the inaugural class.

Tanner sounds like an awesome addition to Mount Oread. Welcome to KU, Tanner!!

Thanks! I wondered the same thing.

Best of success Mr. Tanner Newkirk at KU. I hope your track career (and education) can parallel another Kansas native. As indicated Jim Ryun was dominant in high school (and beyond). Watch the YouTube video although very grainy it showed his dominance in high school.