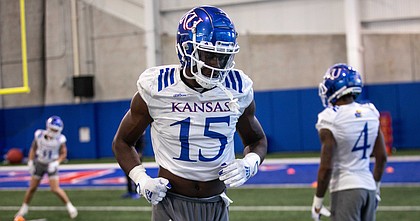 Even though linebacker Craig Young only transferred to Kansas before the spring semester, safety Kenny Logan Jr. said he has already begun to take a leadership role on the team.

Young, who played in 26 games over three seasons as a backup at Ohio State, is expected to be one of the Jayhawks' starting linebackers and at least compete to be their top nickelback.

Logan, speaking last week at Big 12 football media days at AT&T Stadium in Arlington, Texas, was asked about how players are buying into coach Lance Leipold's concept of a player-led team.

He responded by telling a story about how Young stepped into a leadership role.

"We had a conditioning run the other week, and Craig Young was holding a young freshman accountable," Logan said. "Just seeing that shows the growth of our team and shows who we have in this program. I kind of backed him up with what he was saying just because that's the level that we're at right now.

Logan said the biggest transformation in the team from last year, when it was just getting acclimated to the idea of Leipold as their coach, is the increased attention to responsibility and togetherness.

Young, who is 6-foot-3 and 230 pounds, was a sectional champion sprinter at Wayne High School in Fort Wayne, Indiana, who ran the 100 meters in 10.7 seconds.

Logan was also asked if Young could be one of the Jayhawks' best athletes.

Coach Lance Leipold said the game at Houston on Sept. 17 may give the Jayhawks a first glimpse at what they can expect from the Cougars in the future.

Houston, BYU, Cincinnati and UCF are set to join the Big 12 on July 1, 2023. Their additions mean the conference will have 14 teams for two seasons until Texas and Oklahoma depart for the SEC in 2025.

"It'll give us a little bit for what's maybe coming down (the road), but you don't know now if there's 14 teams, we may not see that team for a few years after that," Leipold said.

Big 12 teams are expected to continue to play nine conference games despite the additions, meaning four teams would not appear on the schedule.

Kansas and Houston were contracted to play a return game at David Booth Kansas Memorial Stadium on Sept. 16, 2023, but the teams will each need to find new opponents given the Cougars' move from the AAC.

Excited to see Craig Young and the other transfers this fall. In the meantime, glad to hear that he and the other players are leading beyond the coaches. There have been other coaches that have talked about it, but it went nowhere because the players didn’t follow. Ultimately, the players have to set the standard.

If the schedule isn’t going to include everyone else, why not go back to an 8 game conference schedule so there’s less beating up on each other and greater opportunities for bowling?

Agree on the eight game schedule Dirk. Especially for us, who need more non-conference games.

Guys, I see us going the other direction on non-conference games. If we want to increase our revenue i think we will drop them altogether in a super league or have an arrangement with other conferences. I think we should go after the big dogs. Make them earn their money.

At Ohio State, Craig Young was moved around and switched to several different positions. He was recruited as a wide receiver, but then switched to defense and played both linebacker and strong safety. They even tried him as a "hybrid" style between linebacker and safety.

It sounds like at KU , he will be an outside linebacker primarily. However, he might stay on the field as the nickelback when we go 5 in the secondary. Let's face the facts that most NFL defenses have gone to 2 linebackers and 5 defensive backs as their standard arrangement.

Randy - It would be nice to see football adopt a system similar to basketball where every conference A team plays a conference B team on one of the weekends. It would seem to be more attractive for media partners but not sure that changes the revenue because the media contracts are created independently.

There also would be a few regional teams that would increase attendance, but for the most part attendance will be based on the product put on the field and likelihood of winning , not the name of the opponent.

At this time, football is still a bowl driven sport, and bowls require 0.500 records or better. From a conference perspective, the conference will only be 0.500 in any week with conference games. The % is closer to 1.000 on a weekend like the SECs mid season noncon scrimmages rest weekend. We won’t be improving perception or win% or revenue by playing a schedule tougher than the SECs.

Tougher schedule isn’t right. Should have said scheduling more aggressively than the SEC.