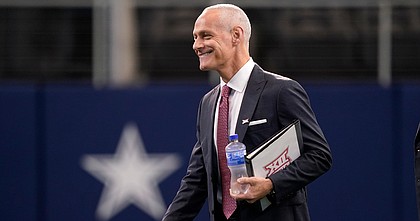 ARLINGTON, Texas (AP) — New Big 12 Commissioner Brett Yormark declared the league “open for business," saying that while nothing is imminent all options will be considered as he takes over with conference realignment again shaking college sports.

Yormark made his introductory remarks Wednesday at the start of the conference's football media days at AT&T Stadium. He was named Bob Bowlsby's successor two weeks ago. The next day it was announced Southern California and UCLA would be leaving the Pac-12 to join the Big Ten in 2024, setting off all kinds of speculation about what moves might follow.

“We are exploring all options and we are open for business,” Yormark said, when immediately asked if the Big 12 was actively engaged in talks with any Pac-12 schools.

“Optionality is good, and we’re vetting through all of them," he said, without being specific about schools. "I think it’s fair to say I’ve received a lot of phone calls, a lot of interest. People understand the direction of the Big 12, and we’re exploring those levels of interest.”

With the Pac-12 down to 10 teams, any further significant loss of members could deal a fatal blow to a conference that was officially founded in 1959.

The former Roc Nation executive and CEO of the Brooklyn Nets officially begins work Aug. 1, but he has already been plenty busy with Big 12 business.

“What excites me most about joining the Big 12 is the transformative moment in front of all of us today,” he said. “We have an opportunity to grow and then build the Big 12 brand and business. ... Moments like these do not happen often, and we must seize them and make the most of them.”

Along with realignment, Yormark emphasized adding revenue streams and the opportunity to nationalize the Big 12 brand, be more aspirational and appeal to youth culture “to get younger and hipper.”

He also mentioned "seeing the true professionalization of college sports” at a time when name, image and likeness compensation for athletes is going into its second year.

The Big Ten's move West was another seismic shift in conference realignment, much like when it was revealed a week after Big 12 media days last summer that Texas and Oklahoma were moving to the Southeastern Conference no later than the 2025 season.

“I’m certain that Brett is just deeply appreciative of the way he was welcomed into the Big 12 Conference with, once again, conference realignment at the top of the list of things to deal with,” said Baylor president Linda Livingstone, part of the Big 12 board's three-person executive committee that headed the search.

Livingstone spoke to Yormark by phone a couple of days after he was named, which was after the news about UCLA and USC.

“Well, welcome to college athletics, and you thought working for Jay-Z was really exciting,” she told him.

Yormark described himself as actively engaged in realignment, with input from throughout the conference.

The Big 12 is going into its 12th and final season as a 10-school league. BYU, Cincinnati, Houston and UCF all join next summer after being approved for membership last September.

The pending departures of two of the Pac-12′s biggest brands came as a huge surprise, just like a year ago with the Big 12′s only national champions in football deciding to bail on the conference.

Yormark said the possible addition of more teams to the Big 12 wouldn't necessarily have an impact on any decision involving the Longhorns or Sooners leaving before the expiration of the league's media rights deal that has three more football seasons.

“I’m sure there’s going to be a moment in time where we’re going to sit down, discuss the future,” Yormark said about Texas and Oklahoma. “But any situation like this, I always look for a win-win scenario. That being said, it’s important that whatever happens is in the best interest of this conference.”

Yormark plans in August and September to visit the current Big 12 schools and the four coming on board next summer.

Livingstone said Yormark rose to the top of a strong pool of candidates during the search process.

“We could tell that with his experience in professional sports and sponsorships, and in media, in entertainment, given where college athletics is going, and all the changes taking place, with our media rights negotiation coming up, that Brett, in combination with the really strong athletic directors we have across the conference, would be a great combination to position us really well for the future,” she said.

This is will be Yormark's first job in college athletics, though he said it is a career path he often thought about taking.

The 55-year-old was an executive on the commercial side of Jay-Z’s Roc Nation after previously working with the Nets and running Barclay Center, their home arena, for more than a decade. He was NASCAR's vice president for corporate sponsorships before that.

“I always had a vision to be in college sports. Candidly, I thought it might have been an AD, I wasn’t sure,” Yormark said. “But I was enamored with the space. It was fueled during my time at Barclays Center. When this opportunity presented itself, I said, let’s give it a great shot, and thankfully it all worked out.”

- best position it has ever been in before

- there is not a definitive plan right now

"Loose" Miles vibe from this guy.

Sounds like General George Custer commenting to his staff as they rode up the hill toward the Little Big Horn!!!

YES! His Indain scouts even told him it was the most teepees they had ever seen.

Don't worry guys I got this!

The article is reasonable and doesn’t take as long as listening to the video, but the latter is worthwhile.

Reporters are probably almost obligated to ask some questions, regardless of how inane, but Brett did a good job of providing appropriate answers, even if some might get frustrated with them.

It was interesting to me that he referred to a multimedia deal, and not just media. I’m not sure what the multi is, but it seems like that is part of his experience that makes him good for the conference. It will obviously be very different by the time the next deal goes into effect, but I got the sense that it will be different in a good way that most of us can’t even imagine.

I listened to it before I posted too. It was listening that made me cringe.

If you want to see the difference between our unique hire and Kevin Warren of the B10 read or listen to Warrens simular press conference. One of these new commissioners is playing chess, and the other one is playing checkers.

I hope you are right to be opptimisitic. I think this is going to be too much for him to handle. He has a lot to learn, right in the middle of some very important decisions. Learning on the job is not ideal.

Interesting that you mention Warren. Isnt he another one of the new school commissioners?

There’s always lots of things to learn when starting a new job. Great that he’s taking the first 2-3 months to go around to all 14 schools to meet the various staff. Haven’t heard if that includes janitors.

While learning the perspective of those you work with is important, learning what’s been done before in this case is less important. I think it was Einstein that said you can’t solve today’s problems with the same paradigm that created them. That’s the huge benefit that Yormark brings. There will probably be plenty of things that the “Get off my grass” crowd complains about, though they might be inclined to complain regardless.

There will be some that will complain because we aren’t as big or whatever. Maybe that’s important. Maybe someday we’ll have 50,000 students and 90,000 in the stands each week. Or maybe we’ll continue to be a really good university in a really good conference without that.

I was referring to Warren's press conference in 2019, where he introduced himself to the B10. He shared his history, discussed his ideas and what he wanted to accomplish with the B10 as he was asked questions. Quite a difference from what our Marx brother did. Warren had NO experince in the position at that point either. It was Apples to Apples.

The things you learn about, if you are qualified and knowledgeable about the job, is where to park your car, meeting your new staff, how the place you are working at does things. Not how to actually do your job. Learning on the job means mistakes. We can't afford mistakes over the next 3 years.

You miss the point on Einstein's quote. He is talking about looking at an issue from a different perspective. Not bringing in someone who has very little knowledge - on media contracts, college sports, the midwest, nor the schools he is representing.

This hire was a leap of faith, exactly at the time we needed to put our faith in someone who alredy knows what to do.

Reading some of these comments sounds a lot like what we heard when Roy Williams was hired for his first college head coaching job.

This guy has the tools. He was selected for a reason. I'll give him an opportunity to prove his mettle. I like his chances for success a whole lot better than I did for his predecessor.

Anyone impressed with Kevin Warren and critical of Brett Yormark leaves me wondering more about them than either commissioner.

Anyone who thinks Yormark was the best person for the job makes me wonder if they think the Earth is flat too.

I must say Brett reminds me of Frank Gorshin, "The Riddler" on Batman.

I guess its time to move to the Big Ten

“someone who has very little knowledge - on media contracts, college sports, ”

Seems to prove that listening skills and reading comprehension can be tricky.

At the same time, some of the other comments become much more understandable.