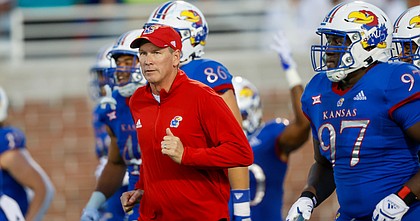 The Kansas football team added another offensive tackle to the mix when Dominick Puni, formerly of Central Missouri, decided to transfer and join the Jayhawks.

Puni, from St. Charles, Missouri, is not a recent addition for coach Lance Leipold and his staff. Rather, he decided to transfer to Kansas on March 7, two days after he took an official visit to the university and attended the men's basketball game against Texas, and chose not to publicize it.

A 6-foot-5, 300-pound graduate of Francis Howell Central High outside St. Louis, Puni has two seasons of eligibility remaining. He played in seven games and started three at right tackle for Central Missouri in 2018, started all 13 games at left tackle in 2019 and started the first two games last season before missing the rest of the season with an unspecified injury (the MIAA did not play football in 2020 amid the coronavirus pandemic).

JayhawkSlant.com was the first to report that Puni had transferred to Kansas on Saturday, once he enrolled at the university.

Puni is the 19th player to transfer to Kansas since the end of last season and the third offensive lineman, though he's the first who did not leave Buffalo. Nolan Gorczyca joined the team before spring workouts and Deondre Doiron did so once the semester ended.

Kansas only lost one starting offensive lineman from last season in left guard Malik Clark, who was a sixth-year senior and started throughout his final four seasons. Clark will likely be replaced by Michael Ford Jr., who will move to the left side after starting 10 of 11 games at right guard last year.

Coach Lance Leipold said during spring practice that he still needed to identify a swing tackle, a swing guard and a center who could step in to replace his starters when needed and that he wanted to work toward having a second unit with players at each of the five positions.

Monte McGary, a defensive back who spent last season at Utah State, is considering transferring to Kansas, according to 247Sports.

A 6-foot, 195-pound native of Omaha, Nebraska, McGary is a sixth-year senior who would be changing schools for the fourth time. Mostly a cornerback, he played in all 16 games as a true freshman at South Dakota State in 2017, moved to Iowa Western Community College in 2018 and enrolled at Troy in 2019.

He never played that season because he injured a shoulder in fall camp, then opted out of playing in 2020 amid the early months of the COVID-19 pandemic. He received his undergraduate degree from Troy, then transferred to Utah State, where he played in all 14 games, with three starts, as a free safety last season.

McGary finished last season with 24 tackles, including an interception and a fumble recovery, and decided to enter the transfer portal on June 21.

Just saw a report that Avery Johnson committed to the purple kitties. Oregon and Washington were reportedly the other options.

It will be interesting to see how the PAC12 uncertainty impacts recruiting.

Any other news with players beginning to enroll for the summer?

It’s great to add someone Puni’s size in the trenches.

My understanding is Puni will play tackle, and Doiron is versatile enough to play anywhere.

Gorczyca, I think is slotted for guard duty.

I think I actually read a quote from Johnson stating the he specifically was NOT considering Kansas. Well, okay then. Your point on Pac 12 recruiting certainly didn't hurt KSU's efforts. I look forward to him going 0-4 vs. the Jayhawks.

There very well may be some recruits who were thinking Pac 12, who might be rethinking now. I know that we lost one guy to Oregon State, and another recruit (don't know if he has committed) was leaning Oregon State. Maybe they reconsider?

In regards to the PAC, I'm not sure how that conference survives. There is really no one of value that they can add. They can limp along without their two biggest brands, but Phil Knight isn't going to let Oregon twist in the wind. So consider them gone. Hell, he'll pay the admission if needed to the Big Ten. And no mater what anyone says, the Big Ten will want Stanford. They are a great fit. So, then there is nothing left, really.

While sports are competitive, I take no joy in the dissolution of the PAC. I loved it as a league, I loved turning on a game late and the sun was still shining on the stadium, and the traditional Rose Bowl, along with the Final Four, was one of the two great sporting events in America. I would really like to see a merger with whatever teams are left. While a Big Ten slot is the absolute best outcome for KU, I haven't read a single national article suggesting that we are anything more than the 6th or 7th pick. If we don't get in, a Big 12 with ASU, WSU, OSU, Cal, Utah and Colorado could be a good league. It would give us the three time zones, better travel partners for most schools, and plenty of pop.

The good-quality PAC schools don’t want to join the Big 12. The Big 12 is worthy of adding Tulsa and Louisiana Tech.

Robert, where else are they going to go? And by good-quality, I'm not sure what you mean. I already pulled all of their biggest brands out. If you are a leftover, what are your options? Hope that the Big 10 goes wild and takes everyone? Or merge with the Big 12? Or what? They don't have many choices.

I think we are 3 time zones with WVU in the east when byu is added in the mountain. It will be interesting to see how B1G handles 4.

I agree with you that it seems important (?) to have the major universities out west represented, the problem becomes $, or rather what TV is willing to pay for their play. TV wasn’t willing to pay much for the PAC12 schools even with usc/ucla. If the school doesn’t bring at least $50M to a tv contract, it devalues the existing schools. No AD is going to take less $ and increase their travel expenses. It’s a brutal reality right now.