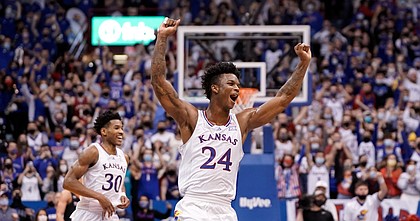 Before KJ Adams could rejoin his Kansas men's basketball teammates on the court, Mitch Lightfoot wanted a word.

Lightfoot, a sixth-year senior who has mentored Adams this season, reiterated the instructions from the coaches at the end of a timeout with 1:38 left in the second overtime against No. 13 Texas Tech on Monday. Adams, a freshman who had already shown during the game that he could handle his suddenly expanded role, listened and understood.

Whatever certainty Adams may have lacked, until that moment and afterward, was never apparent. The forward finished with six points and four rebounds in the fifth-ranked Jayhawks' 94-91 victory, but it was his defensive versatility that earned him his greatest workload of the season. 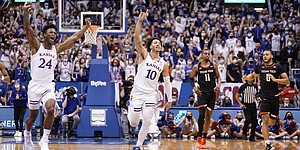 View a gallery of images from Monday night's game between the Jayhawks and Red Raiders at Allen Fieldhouse.

It may also open an opportunity for Adams to assume — or perhaps maintain — a greater responsibility the rest of the season.

"He came off the bench, gave us a spark, gave us that energy," said Ochai Agbaji, who led the Jayhawks with a career-high 37 points, including the 3 that tied the score at 86 with 7.3 seconds remaining in the first overtime. "Kind of switched up our defenses. We were kind of switching five there for a little bit with him in the game, kind of going smaller. He still had that rebounding factor that we needed for that stretch."

The coaching staff turned to Adams as an answer for Texas Tech's Bryson Williams, a 6-foot-8, 250-pound senior forward who finished with a season-high 33 points. Williams' versatility, range and comfort as a ballhandler made him a mismatch for Lightfoot and senior starter David McCormack, but Adams, at 6-foot-7 and 220 pounds, appeared comfortable not only defending in the post but switching off ball screens and drifting out to guard the perimeter when necessary. 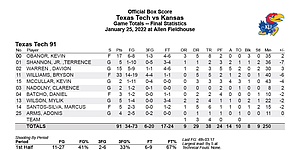 That's not to say Adams was KU's antidote. In fact, on Texas Tech's first possession with Adams on the court, with 3:20 left in the first half, Williams easily backed him down into the low post, spun around and lofted the ball left-handed through the rim. On Adams' first play back on the court in the second half, Williams scored on a similar play, and a similar shot, with his right hand with 11:53 left to play in regulation.

But Williams scored 22 points before Adams returned in the second half. He then scored five more in the first overtime, most of which Adams spent on the bench, and only three in the second overtime, when Adams played the entire period.

"We couldn't guard him," said Kansas coach Bill Self of Williams. "KJ was the only one who had a chance to guard him. We decided not to trap him because we didn't want to give up 3s, and we thought we could do a good job if we could get him to being a 2 shooter. But we just didn't do a good job until KJ was in there and made a big difference when we could switch five and didn't have to guard a ball screen, too."

Adams also provided two of the biggest plays of the game on offense, both in the second overtime. With 1:56 remaining, KU's Jalen Wilson was forced to take a midrange jumper with three seconds left on the shot clock. Adams, on the weak side, was able to pull down the offensive rebound over Texas Tech's Kevin McCullar to extend the possession. After Dajuan Harris Jr. drove the lane and missed a layup, it was Adams who rose over McCullar and Kevin Obanor to tip the ball in and tie the score at 91.

Then, with 16.5 seconds left and the Jayhawks up 92-91, Wilson tried to draw a foul on a drive to the rim. The shot missed, no foul was called, but Adams, on the other side, managed to tip the ball away from the waiting hands of Williams and into the backcourt, where Christian Braun gathered it and was fouled with 10.1 seconds left.

Self called it "maybe the second biggest play of the game" behind Agbaji's tying 3-pointer.

"He got that ball one against two and CB was able to run it down and get fouled," Self said. "He didn't get the rebound on paper but that was his board."

Minutes have been hard to come by this season for Adams, a native of Austin, Texas, who was a top-100 recruit out of high school. Left to fight with Lightfoot and McCormack for a chance to get on the court, Adams' biggest contribution may have come Jan. 11 against Iowa State, when he started and played just shy of 10 minutes.

Adams had been told two days before the game that he would start, and he responded by repeatedly reviewing the team's scouting report, hoping to show during the game that he was ready. Aside from a thunderous dunk in the opening minutes, however, he played timid, and Self has turned back to McCormack to start ever since.

Perhaps that was the advantage, then, for Adams on Monday night: Without notice that he would be thrust into a more significant role, he didn't have time to overthink. He just had to play with instinct.

"I'm just grateful to my teammates for giving me the positivity to not even allow me to get scared or frightened by the big moment," Adams said. "I'd like to just thank all them for all they did."

Kansas freshman K.J. Adams speaks after the win over Texas Tech by KUsports.com

Some people criticized Dok because of his inability to shoot outside of about 6’, but it was his transformation into being able defend out to the perimeter that made the 2020 pandemic cursed team so tough.

In 2012, we were forced to move our 4 (TRob) to the 5 and sit one of the best players (C - Withey) because TRob couldn’t defend on the perimeter.

The comments on defending Pack and the kitties is essentially calling out CB and JWil? To a lesser extent it could be a challenge to Ochai, but that’s a pretty tall order to expect your O leader to also be a shutdown defender while playing 95% of the game.

Dirk: u watched Dmac for 3 f***ing years & u think THIS SEASON hes magically gonna be able to guard the perimeter?! Chef, ill have the THC-laced dinner Dirk is having, thank u! sit DM's butt on the pine the rest of the yr, the kid TRIES HARD, but is f***ing Worthless. like that pseudo rebound he missed at the end of the game & Self yanked his @$$ after that. good kid; terrible bball player. should only play mop up minutes for us here on out. truth aint pretty sometimes.

If you’re talking about the play at the 3:00 mark, go back and watch that play again. DMac’s left arm was slapped by McKullar as David was trying to secure the rebound with both hands. In the closeup replay, David came down with the ball in both hands, but McKullar reached in. As David started back up with the ball, and McKullar’s right hand having slapped David’s left arm down by his side, caused David to tip the ball up with only his right hand, and into McKullar’s hands.

I reviewed that play too in slow mo and the biggest thing is that DMac has only one thing to do at that time and that is to get and secure the ball. The slap happened and did not get called, BUT he has to hold on to it with everything he's got. Look at it again and you will see he fumbles it even after he has the potential to secure it. And then of course when he losses it, he fouled the guy. A huge turn around and another example of not doing what needs to be done and then making the next play.

Pizzaboy - It’s only been a couple years since Dok changed from a D liability on the perimeter to a strength of the pandemic team, so not only do I think it can happen, but I know it can. Nothing is guaranteed, and each player is different, but yes, it can happen.

Personally, I’m going to choose to agree with Coach Self - that the team maximizes it’s potential in large part based on DMac’s developing to his potential. It reminds me of when people were writing flaming comments about TTaylor, but Coach realized his potential and rode with him to the FF. It doesn’t always work out, but I’ll still side with Coach.

I really like DMac's attitude, but in the K-state game, he did another one of those Edward Scissorhands rebound moments and also missed what appeared to be another bunny "gimme" from two feet away.

There has got to be a way for him to solve this. It must be in his head as to how he misses these opportunities so many more times than other players do.

Would a sports psychologist help him? Maybe he is like a receiver who misses an easy pass because they are thinking about what's next vs. catching the ball first.

I really think he can cure this, but I don't know what the answer is for our former McDonald's All-American.

KJ is going to help us a lot. I have a feeling if he continues playing D as Zac detailed above, he'll be playing more significant minutes. He's strong and doesn't back down when pushed around. Very solid D. He's got nice vertical, too. I'm pretty sure if coach BS setups offense plays for him, he'll finish with 10-20 dunks by end of seasons. He's got quick hops.

Robert, I kind of agree. But offense, we have more problems with the way coach BS' strategy on ball doesn't stick. Matt has a good article regarding <a href=http://www2.kusports.com/weblogs/tale-tait/2022/jan/24/jayhawks-emphasis-on-avoiding-charges-in/> KU's offense vs TTech</a>.<p> Kind of what I've been complaining about, too. Fast ball, ball doesn't stick, but easy to create TOs out of. Easy to predict. Lots of teams don't need to spend time scouting this kind of play. Players distribute the ball when he's on the move, the ball is being passed to some other players that are not positioned in front of him. We end up with charge calls or trapped. Our offense sucks. Defense has so far, bailed us out. </p>

Lee Short, agree! DMac seems to have the weakest hands I’ve ever seen for a big man. Always gets it knocked out of his hands often before he even has a chance to shoot. You described it perfectly “ Edward Scissorhands rebound moments”.

I realize I was referencing the wrong game, although it doesn't really matter as more games than not, this happens to Dmac at least once a game. In this case, it was the Texas Tech I was referring to.

Maybe he should watch some Azubuke tape. I remember how I loved the way Azubuke secured the ball on rebounds. I also loved his scoring efficiency and domination around the rim.

Adams is a true "energizer bunny"!

Good things happen when he is in the game.

Ken Pon Ranks re the Big Xll as of 2 days ago:

Bill Self has continually remarked about how bad KU`s defense has been and this confirms it.

I tried to post this as a chart, but everything got grouped up and presented in paragraph form when posted.

Blake, much appreciated for the stats. I wonder if our OE is good because of Ochai. It doesn't say much about the way the team attack the basket. But thanks for the stats. Didn't realize our D is that bad.

Ken Pom also has KU ranked as the 3rd most efficient offense in the country. We all know the D needs to improve. But they aren't terrible at 50 out of 350 schools. You would like to see that number go upwards toward the top 20 as the season progresses.