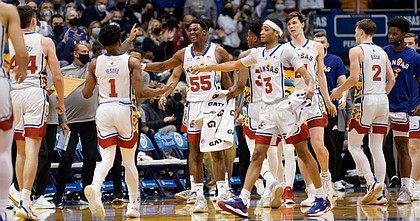 Look at the statistics and they’ll show you that No. 5 Kansas is one of the best transition teams in all of college basketball.

The Jayhawks, at 121, rank third nationally in KenPom.com’s offensive efficiency rating metric (points scored per 100 possessions) and a huge chunk of that number comes from how often and how successful the Jayhawks score in transition.

Ask the Jayhawks themselves where they rank on the run and they might very well tell you that they’re the best team in the country, not just one of the best.

“We just thrive in that,” senior guard Ochai Agbaji said after Tuesday’s 102-83 win over Kansas State at Allen Fieldhouse. “We love to play that way.”

Added KU junior Christian Braun: “We like when teams try to push the pace with us. I don’t think any team in the country can play that fast with us. We’re a good team in transition, and if teams want to play like that, we’ll score 100 points.” 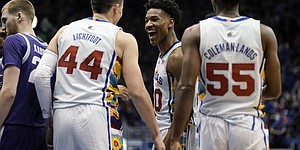 View a gallery of images from Tuesday's Sunflower Showdown between the Kansas Jayhawks and Kansas State Wildcats at Allen Fieldhouse.

That fact was on full display Tuesday night at Allen Fieldhouse, where the Jayhawks ran past a Kansas State team that appeared powerless to stop them.

Not only did the Jayhawks reach the century mark in their latest win in the Sunflower Showdown, but they also shot 64% for the game, scored 1.29 points per possession (their fourth best mark of the season) and broke the game open by turning their defense into offense with the relentless approach you see in some kind of timed layup drill at practice.

While the Jayhawks (23-4 overall, 12-2 Big 12) knew heading into Tuesday’s game that they were capable of putting up big numbers in transition, the game turning into a track meet was the last thing they expected.

“Most teams that we play are probably more opportunistic (with) transition,” Kansas coach Bill Self said after the victory. “And tonight, K-State wanted to push the issue. I personally think it surprised us, to be honest.

“I’ve got to give (K-State coach) Bruce (Weber) credit,” Self added. “I didn’t expect them to come in and say ‘We’re going to outrun them.’ But they did. And there for a while it felt like they could. But then we finally settled in and we shot the ball so well.”

While Self acknowledged being surprised by Kansas State’s willingness to try to run, he certainly was not disappointed when he saw it. 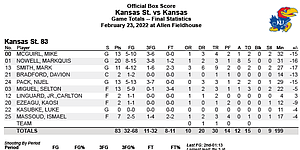 For years, Self has put the bulk of his emphasis on his team defending others and taking them out of what they want to do. But this group, which is still a work in progress defensively, is clearly stronger on offense.

While that has run counter to what much of the rest of the Big 12 has been about this season — eight of the 10 teams rank in KenPom’s top 40 in defensive efficiency and all 10 are in the top 54 — Self has shown the ability to embrace it instead of fighting it.

“I thought we’d always play better if we played fast,” Self said Tuesday night. “To be real candid with you, there's been many, many years here where we were one of those teams that tried to slow people down. This is just a year where our offense is better than our defense.”

Agbaji, who leads the Big 12 in scoring (20.2 points per game) and is the leader of KU’s offensive attack, said

“From the beginning of the season, I think, with the makeup of our team and the speed that we had, we knew that if we got a rebound it would just be an advantage because we run so fast,” Agbaji said. “Everyone would fill the corners and run lanes hard. When we do that, that’s when we’re at our best and really dangerous.”

Although the Jayhawks’ ability to put pressure on opposing defenses by running as often as possible has contributed to their offensive efficiency rating, it’s important to remember that transition points are only part of that equation.

The Jayhawks shot 65% on 2-point shots on Tuesday night, bringing their season total in that department to 56.5%. And that’s without a dominant presence inside like Udoka Azubuike, who made shooting 70% for a season seem normal.

When you combine those two factors — killer transition with high efficiency inside the 3-point arc — you find a team like this one, which currently ranks third nationally in offensive efficiency and currently trails only the 2011-12 and 2016-17 teams (both at 121.9) in the Self era.

While the Jayhawks continue to tinker with and fine-tune elements of their offense in hopes of becoming even harder to guard, perhaps the best way to understand just how impressive Tuesday’s offensive performance was is to hear from the other side.

Added Weber: “We had no answers tonight with them. I told our guys after, learn from the best. They are the best right now. They move the ball, they all have advanced their games.”

You summed it up perfectly, Matt:
killer transition with high efficiency inside the 3-point arc ...

Our 3pt FG last night is the best that this team has made so far, iirc. Glad that coach BS has embraced this - it's his pure gold.

I have to admit, I was surprised by the frenetic pace of the game as well. I thought back to the first half of the 1988 NCAA finals when Kansas and Oklahoma played at a frenetic pace in the first half and scored 50 points each. It worked for KU to play to OU's pace back then, but thankfully it didn't work so well for KSU to play to KU's pace last night. Like I said in another article, "Nothing like KSU scoring 83 points and still getting blown out!"

“ they all have advanced their games.”

So true - I think every player on our team has improved. Some took a while, and had to prove themselves to Coach. But look at Yesufu’s production , and Clemence. JCL is steady. Da Juan has improved his offense. DMac is playing with conference. And JWil is a new man!

I too, was thinking about the 1988 National Championship. One difference between that game and this one, was that KSU didn't try to slow the game down in the second half. Where this years' team needs to be concerned is, defending against a team that decides to play slower. At times, this team has played brilliantly on defense, and at other times, horribly! In one game, there were several possessions by the opposing team that KU defended terrifically, right up until giving up an easy bucket as the shot clock expired.

Self, through most of his years at Kansas, has cherished good possessions over numbers of possessions. That differs from Roy Williams, who tended to cherish total possessions, figuring the team that had more possessions was likely to score more points. There are advantages to both, except one would think maybe Self was right, at least in the Final Four game against UNC in 2008.

This team is definitely better when playing up-tempo while the ball tends to stick when playing a grind-it-out game. That said, as the season winds down, and Coach makes fewer substitutions, the players on the court are less afraid to shoot when open, rather than passing up the shot.

That was a pretty complete game, except for a few brain fahts on defense & passes to nobody. Hoping we'll get Martin & Pettiford back to full steam by tournament time & have a complete arsenal of weapons.

A favorite quote from ’88:
“Kansas can run with Oklahoma, but they can’t beat them running.”