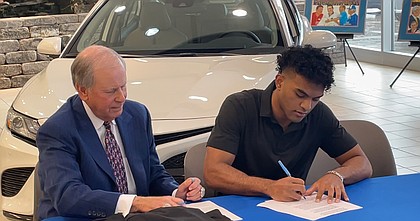 In the seven months since the NCAA made profiting on one’s name, image and likeness legal, athletes at the University of Kansas have cashed in on close to half a million dollars.

KU Athletic Director Travis Goff on Thursday morning provided an update on KU’s NIL statistics to the Kansas Athletics, Inc. Board of Directors.

In it, Goff said more than 80 different Jayhawks have brokered more than 170 total NIL deals since July 1 through the end of January. In addition, Goff said at least one athlete from all 17 of KU’s varsity sports had received an NIL opportunity and that the average transaction value per deal was $2,728.

“(That’s) heavily skewed by maybe the handful of five-figure men’s basketball deals,” Goff added. “Nothing in the six figures. Nothing that I think has been just at the forefront of progressive, so to speak, but we feel good having created a foundation of education with a strong lens toward compliance.”

KU spokesman Dan Beckler told the Journal-World after the meeting that the exact numbers were 86 Jayhawks and 174 deals, with Rally House also selling roughly 2,700 KU-related items that factored into the NIL numbers.

In all, Beckler said 3,025 NIL licensed KU items had been sold to date, including shirts and autographed basketballs. This fall, KU plans to partner with with Fanatics to launch a Kansas football jersey program. And, as of Thursday, there were more than 40 different KU merchandise items in the market that were tied to NIL opportunities.

Among the bigger and more popular NIL deals at KU thus far are Remy Martin’s car deal with Crown Toyota; the Applebee’s commercial with KU football tight end Jared Casey, who caught the game-winning 2-point conversion in KU’s upset win over Texas; KU quarterback Jalon Daniels’ agreement with Gorilla Glue through an appearance on the Rich Eisen Show and senior forward Mitch Lightfoot’s handful of deals with companies and apparel partners, including KU’s first ever deal with 1-800-GOT-JUNK.

Goff also noted that other Lawrence-based companies and KU athletes who hail from Lawrence had agreed to NIL deals, as well.

“We’re seeing some positive outcomes, where you have all types of programs represented, all kinds of backgrounds represented,” Goff said.

He added: “We continue to make it a focal point in terms of multiple people in the department spending time on it as the market kind of settles in. And I think we’re all very interested in what might still be out there in terms of leveling the playing field (through) federal legislation that will balance things out and give us some consistency across collegiate athletics.”

In other news from Thursday’s meeting, the board also:

• Praised recent efforts by Kansas basketball fans at Allen Fieldhouse for adhering to the mask requirement while watching men’s and women’s basketball games. KU Chancellor Douglas Girod called KU’s efforts there “really uniquely successful within the Big 12.” He added: “Having both watched and been in multiple other venues within the Big 12, nobody’s even made an attempt to do it as well as you guys have.”

• Received an update from KU’s Chief Financial Officer, Pat Kaufman, on the state of the budget at the start of the spring semester. Kaufman called it “kind of a quiet year” after the past two fiscal years were impacted by the pandemic. And he noted that KU was 55% of the way to making its contracted revenue goal and 45% of the way to its variable revenue goal. The latter includes ticket sales and donor money, which Kaufman’s data showed had reached 101% and 96%, respectively, of expected earnings for the current fiscal year. “It’s nice to see the year playing out the way we had planned it,” Kaufman said. “Things are looking pretty good.”

Included in Kaufman’s report was an update on the U.S. Supreme Court’s recent ruling that struck down NCAA caps on student-athlete academic benefits in the Alston case. Kaufman said that the Big 12 Conference, in response to the ruling, has indicated that an additional $5,980 per scholarship athlete on top of the full cost of attendance benefits that already exist, would be available in Fiscal Year 2023, beginning this fall. The money will be tied to good standing in both conduct and academics and dependent on the scholarship of each athlete.

This is weak. Great NIL opportunities are not a reason to play at KU it seems. We probably should not have partnered with someone who had no experience in advertising before, to drive this revenue. Even if they are past KU grads.

I am also not impressed by Goff's work so far on many other topics. He came to us as a whiz kid at NW fundraising. I thought at least he would have shown something on that front but he talks about revenue concerns earlier this week. The anonymous text hotline sounds like a bad idea. 3 months behind UK on a NFT launch is not something to hang your hat on either.

I would like to give Goff a couple of years, but he already appears way over his head. I wonder if Girod hired him just so he could control a young AD better.

Just love your perspective, thanks for gracing us with it. You're so insightful and I really value how you feel about things.

I would like to echo everything Phil said. Thank you for contributing in such a valuable way to the discussion.

Sorry Phil and Gavin for splashing cold water on our NIL performance and our AD who seems a little over his head (maybe he should have ran the mens bb video team first). Coaches around the country are starting to see it, the $ money on NIL deals, is being factored into recruiting.

Self and Coach L can make up some of the difference, but only to a certain point. All you have to look at is KU being 3 months behind UK with NFT's. That was low hanging fruit. Easy money for our players. It's stupid, but if somebody will pay our players for an electronic picture frame, who cares.

From the start of NIL we have been way to slow to react.

If you would prefer to hear only unconditional support for a failure to capitalize on helping our players make some decent money, you need to pay closer attention. Spoiler alert - I am not that guy.

Also, out of all the players - why did they have to pick Remy for the photo? The one guy who's spent more time on the sidelines than on the court..lol!

why not show Abaji? Bruan? Some of the more prominent players?

Remy is literally signing an NIL deal in that photo. And it's one of the biggest — if not the biggest — that a KU athlete has brokered so far. Has nothing to do with stats or playing time. The photo fits the story better than any other picture out there.

Matt how is signing a lease on a car a giant NIL deal? He has to pay a higher insurance on the "not really his" new car. Having had lease vehicles all he is getting for his "deal" is to borrow a car for free. How is that a huge deal? The average lease for that car is $300 retail, maybe $200 dealer price. If he nicks up the car at all, or goes over the annual mileage, he will actually have to pay a penalty. So net he is likely getting around $200 a month deal, $2,400, taxes on the gift, $300-500? Its flashy but I would be he would have prefered cash. Unless he is using it as a Uber driver, well then he could make some cash at least.

Reading comprehension is your friend, Rodney. I never called it giant or huge. Just one of the biggest - if not the biggest - that a KU athlete has brokered so far.

Unlike you guys, I don't care much about how big their deals are or aren't. That's for them to worry about and fans to fret over. I'm just out here stating facts. And Remy's deal is one of the biggest KU has had to date. Nothing more, nothing less.

The business community that claims to support KU athletics has to do better than this. And I don't say that just because I want to see us win, I also want us do right by the athletes. Until they are rightfully identified as employees, like any other scholarship student with an on-campus job, this is the best way to help them cash in on the tiny window of opportunity they have to earn a fair wage in what's supposed to be a "free market."

Our NIL revenue for the entire department is less than some individual athletes at other schools (Bryce Young, Quinn Ewers, Paige Bueckers, etc.). Miami has a department-wide deal with a chain of gyms worth more than all of our deals combined. NIL deals are going to be, if not already, the most powerful recruiting tool college coaches can leverage. I don't mean to cast any shade on Deion Sanders and his work to lift up HBCU's, but let's be real, NIL deals are a critical component to his success (and I don't think that's a bad thing). It's going to require investment and infrastructure to really get this going. Duke is already partnering directly with Nielsen to get in-depth support with marketing analytics!

There's one name that should be obvious when it comes to getting us ahead of the competition....Philip Frederick Anschutz. If they haven't already, Goff and Girod should prostrate themselves on the floor of his office and beg for his guidance.

For anyone complaining about AD Goff's performance, perhaps I should point out that he succeeded in hiring a Football HC who's about to singlehandedly resuscitate KU football. Don't know how many football games you've seen over the last 30 years, so I should mention that our program has been beneath the lowest of the low ever since an AD named Perkins had a brain seizure and fired Mark Mangino.

Since attaining that high point in 2009, ie. firing Mangino because the Kansas City Star thought he was too fat and too mean, we've never won more than 3 games in any of the subsequent 12 seasons. Finally, the gods have shone upon KU with the hiring of our new AD, Travis Goff. His genius was proven almost instantly through his hiring of HC Lance Leipold. In a near miraculous 10 months, LL has done more for the KU Football program than the intervening 4 HC's together. He's the exact Coach that was needed to resuscitate the Jayhawks. regardless of a seemingly insufficient NIL fund. This year, we're in all likelihood going to field approximately a 6W-6L team, a task that previously seemed impossible to hope for.

Rodney, comparing our NIL funding to SEC teams is not only unrealistic, but also irrelevant. The SEC has been renowned for its boosters, groups of friends and acquaintances who are willing to pay $5k to $25k each in order for their University to obtain a special recruit. It's all been illegal, and they've existed for many decades. All we're seeing today is that the SEC (and other wealthy teams) are funneling publicly visible money into "their" teams, having more or less abandoned their hidden booster groups.

Assuming KU football continues on its upward progress, we're going to see endless financial benefits for all the other programs. Our currently underperforming NIL funding will be overflowing with dollars. We'll quite probably benefit by obtaining an invite to the Big 10. AD Goff will be here for as long as he wants to stay. He'll be a hero!