Key banked-in 3-pointer one of many things that went wrong for No. 8 Kansas down the stretch in 79-76 loss at No. 20 Texas 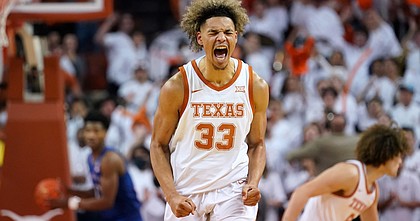 Austin, Texas — Multiple times already this season, the Kansas men’s basketball team found itself in the very position it was in late during Monday’s 79-76 loss at Texas.

And in each of those prior instances, the Jayhawks made a play to win the game.

On Monday, a banked-in 3-pointer by the Longhorns, an open lob that clipped the rim and a few too many miscues by Kansas left the 8th-ranked Jayhawks on the losing end of one of those games.

While all of it pointed to issues with execution by the Jayhawks (19-4 overall, 8-2 Big 12) the banked 3-pointer by UT’s Tre Mitchell that cut the Kansas lead from four to one in the final minute was one of those “ugh” type of moments for the Jayhawks. 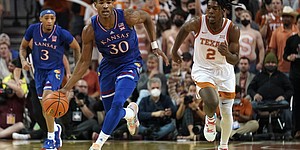 “That’s just our luck,” said KU forward David McCormack, who was defending Mitchell on the pick-and-pop 3-pointer. “That’s the last thing we wanted. It was kind of a dagger. But we still had time to win the game.”

Plenty, in fact. Mitchell’s 3-pointer cut the KU lead to 76-75 with 55 seconds remaining. On the ensuing Kansas possession, a lob attempt in the paint from Ochai Agbaji to a wide-open McCormack hit the rim instead of McCormack’s hands and gave the Longhorns possession with 38 seconds to play, trailing by one.

After a hard cut to the free throw line, UT forward Timmy Allen buried a jumper with 21 seconds to play to give Texas a 77-76 lead. All of a sudden, after leading 76-72 with 1:08 to play after an acrobatic follow-up by Agbaji — one of his four made shots on the night — the Jayhawks suddenly found themselves trailing.

The jumper by Allen, who went for 24 points and nine rebounds on 11-of-17 shooting, was the one that frustrated Self the most.

“I thought Allen was great. He was the one that we defended the worst.” 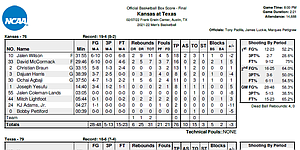 While Allen’s jumper and KU’s inability to score late set the final outcome, no one, not even Self, could fully look past the banked-in shot by Mitchell.

In addition to it hitting hard off the glass and rolling around the rim before falling, it was one of three 3-point makes by Texas on Monday, in 20 attempts.

Added Self when asked about Texas coach Chris Beard’s coaching decisions late: “I don’t know that Chris drew up a play to bank in a 3. If he did, he’s a hell of a basketball coach. But (Mitchell) was open. I think that was the play. I think he drew that up to get Mitchell a shot because David was guarding him.”

Even the man who banked it in was laughing about the shot on his way out of the Erwin Center on Monday night.

After a lingering Texas fan told Mitchell that it was a great shot and that the bank was great, Mitchell threw his head back, shrugged and said, “I’ll take it. It came at the right time.”

The point of not over-emphasizing Mitchell’s hard-to-handle 3-pointer was that many other mistakes — before and after the shot — cost the Jayhawks the game.

Agbaji said Self mentioned a defensive rebound by McCormack grabbed that led to a tie-up and Texas retaining possession. There were also three consecutive misses at the free throw line in the final 3:27 — two by Christian Braun and one by McCormack — that allowed UT to stay close. And then, of course, the lob to McCormack that Agbaji missed. Instead of being up three with under a minute to play, the KU lead was just one and Texas had momentum.

“It wasn’t anywhere near where I was trying to throw it to,” Agbaji said of the errant pass. “It just wasn’t on target. I definitely saw the lob was open. It’s just tough. Little stuff like that is what we’ve got to clean up.”

Added Self: “That was just poor execution, but it was there.”

What frustrated the Jayhawks as much as anything on Monday night was that the mistakes they made that led to the loss were the polar opposite of the plays they had made to win games against Iowa State, Oklahoma, Texas Tech and Kansas State.

“We’ve had a lot go right,” Agbaji said. “But this kind of shows us you can never take that for granted when you’re in those moments.”

It wasn’t that the Jayhawks (19-4 overall, 8-2 Big 12) believed they were invincible in those situations, more that they just didn’t execute and the law of averages kind of caught up with them.

“It’s just how it goes,” said sophomore wing Jalen Wilson, who led KU with 18 points and 11 rebounds. “They got some good plays and we made some bad plays. It just comes down to the last few minutes and they were able to win those minutes.”

Added Agbaji: “This one sucks. It definitely felt like we gave this one away.”

Kansas coach Bill Self on what cost the Jayhawks in 79-76 loss at Texas by KUsports.com

What's crazy is how bad that pass really was? I was sitting 4th row base line. It didn't just graze the rim. He missed a 6ft pass by a foot. That was such a bullchit game to watch in person. Beard is a little bitch. He's my new Norm Stewart. Him mocking the official that told him to get back past half court to his bench should have warranted a technical. Then while Braun is about to shoot, the UT player walks by him and taps him in the gut. Those are bullchit moves, taught by a POS coach.

Probably will not play the rest of the year! Internal knees take a long time
to heal!!

I forgot to mention in my post on the other article the play where McCormack got a rebound only to allow himself to be tied up and the possession arrow goes to UT. As with a similar play at the end of another game recently, he has openly one purpose at that point and that is to get the ball and keep it away from everyone. It`"s called treasure the possession" and he has that habit of taking the ball down where a smaller defender can get to it when all he has to do is hold it up and hold on. To his credit, he made some plays that kept us in the game and then he missed the front end at the most critical time and its another one of many killer plays that led to losing the game.

One other point, Jones is there best 3 point shooter and he goes 0-5 and all were in rhythm. We dodged some big bullets there.

And another point, Ramey's defense on Och was superlative. Och only gets off 7 shots and he forced a couple of those.

"This should be an easy victory." Someone said this yesterday. Comments like this are too often made before KU games. I cringe when I read them. Nothing against the person who said it because I felt that way too, and it was a real possibility. NOTE: He said "SHOULD." NOT, though, because "Texas is horrible." They're ranked #20. IUPUI from the Horizon league are 0-14. That's horrible! Virginia, who would most likely be in the bottom 3rd (or worse) of the big 12 at 15-9, beat Duke last night. The fact is that this is the best league in college basketball and anyone can beat anyone on a given day/night. Remember the KSU game (78-75)? Iowa State (61-62)? Texas Tech (91-94) in Allen)? Easy games don't come easy in the B12. “We’ve had a lot go right,” Agbaji said. “But this kind of shows us you can never take that for granted when you’re in those moments.” Not only certain moments, but that goes for all B12 games. So many factors determine the outcome. A great player can have a bad day. An average player can have a great day or career day. (It seems that happens a lot against KU). Sometimes an entire team can get hot, or have an off night. Every team gets up for KU, the Big 12 flagship team.

Heads up Jayhawk nation. This was just one game, and we are still leading the best conference in the country. We can and SHOULD win it.

I am guessing if a correlation analysis was done as to when the players catch wind / believe the game should be easy (aka arrogance) and when they lose, it would be shocking.

Pride comes before the fall.

Thanks Lee! I agree. I'm sure that arrogance has been costly to more than a few good teams. I remember that Belmont/Duke game. A friend was reading here earlier and texted me this reminder. In 2018, UMBC defeated the Virginia Cavaliers 74–54, becoming the first No. 16 seed to defeat a No. 1 seed in the NCAA Division I Men's Basketball Tournament.

I read the turnover stats in each game and in most games we turn the ball over more than our opponent. We need to treasure the rock and we do not. Teams that run have more turnovers but some of the TO's were just silly a pass in the back of a teammate...come on be more aware.

We were outboarded by UT and we committed EIGHT more turnovers than UT and UT took close to 20 more shots from the floor than we did. Both teams shot the same number of FT but we made far fewer yet we lost by only 3... amazing.

The two buckets at the end of the first half are plays that I was watching and saying, "That's going to bite us in the end."

We have won a lot of close ones, left too much on the table this time.

Dear coach BS: high-school players can throw lob pass even when blindfolded. That's called discipline. Regularities. How many lobs designed for bigs this season? Barely. Practices. Exception is, McCormack, I have no clues how he missed those dunks, how he lost the ball, how he still does those stupid moving screens - but at least 50-50 chance is there. Rather than not throwing lobs at all. Where's that pick & roll play that we used to see Dok perfectly executed? I know none of our current bigs has body like Dok, but they all can slide & dunk. Go watch the tapes again, how many % did we succeed with inbound pass? It all comes down to offense strategy. If we want to win - without laboring so much, we simply can't rely on offensive rebounds, can't depend on transition buckets, can't rely on Ochai. What's the % offense done by our bigs? What's their 2PTA? Very very low. That means they are way under-utilized on offense. Make use of them!!! But not only through inbound pass - there are so many ways - so many ways to involve those bigs.

It’s been a while (years?) since we’ve heard the quotes from the quotes from Coach Self about every possession counts. This article illustrates it without saying it for us. I’m guessing the players have heard it plenty from Coach Self over the years and throughout this season, though maybe not enough. This game should be a good learning experience. It is fun to see the team learn and develop through the year even if we don’t necessarily recognize it because we expect all our teams to be as fully developed as the final version of the previous team. We will be better down the road because of this game and the coaching that’s going on now.

I hope that KU is prepared to commit staff resources and financial support to
efforts in the future to gain critical player needs from the portal transfer process.
Auburn,Texas, and Kentucky are excellent examples this year to get
their starters from the portal.
Recruiting will always be important,but the way things are going, being proficient in
the transfer portal may ultimately be critical to stay on top in college basketball!