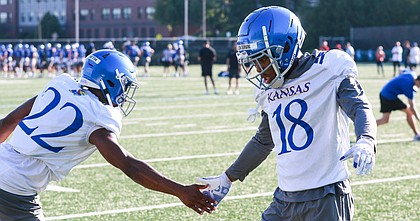 Kalon Gervin remembers being kindergarten-aged when his mother finally had enough of all of the roughhousing.

Gervin and Lorenzo McCaskill, close friends who grew up across the street, loved playing outdoors. One day, Gervin's mother, Djuna Payton, decided they should take their energy to a local football field, and it didn't long for the two boys to fall in love with the sport.

They began playing for the Westside Cubs, which sponsors neighborhood youth teams, with Gervin playing as many as six positions and McCaskill standing out for his physicality. They developed friendships with two other boys, Marvin Grant Jr. and Cornell Wheeler, and a rivalry with the Eastside Raiders, who had an excitable young player named Rich Miller.

"We all watched each other grow," Gervin said.

Although they drifted to different high schools around the city, they all kept in touch with each other. They earned football scholarships, moved away from home and experienced life on their own. And when a variety of circumstances began to converge as they reached college, those bonds led them back to each other, united in one place for the first time since they were teenagers.

All five are now playing football at Kansas, where, come next week, they will share a sideline together at David Booth Kansas Memorial Stadium for the season opener against Tennessee Tech.

"It's crazy when we sit back and talk how we start off as little kids and we had no clue that we would reconnect with each other and be at the same college," Grant said. "We definitely talk about that all the time. It is kind of mind-blowing how we all end up being here at the same time."

The Jayhawks' defense was statistically one of the worst in the country last season, and that underperformance led to the coaches' desire to add more experienced players with a history of success.

Miller, who believes they have, was the catalyst. After following Kansas' coaching staff from Buffalo last summer, he urged Wheeler, a linebacker who had played his first year at Michigan, to join him in Lawrence.

Then, after Kansas finished last season 2-10, Miller turned to the people he knew best. He reached out to Gervin, a cornerback who was looking to transfer from Michigan State, and helped convince him to spurn Wisconsin to enroll at Kansas in January.

Grant, a safety who played at Martin Luther King High with Miller, transferred from Purdue in May. And McCaskill, a decorated linebacker at Louisiana, chose to join the Jayhawks in June.

"It makes me thankful that they knew each other growing up, because I don't know if we would have gotten all those guys if it didn't happen that way," defensive coordinator Brian Borland said.

Borland and coach Lance Leipold each have said that they recognize the value of Miller's outreach — even if credit for the players' additions among the coaches goes to linebackers coach Chris Simpson, who said he has "a place in my heart for guys from Detroit" as he has recruited the city for more than a decade.

If anything, that willingness to play at Kansas is more of a reflection on the impact the coaches have made on their players, given that they've only been together at the university for one season.

"What I really like is the fact that if I was here and I had a friend somewhere else that was looking for somewhere to go, and I thought this place was no good, if I was a friend, I would tell them, 'Don't come here. It stinks,'" Borland said. "They're saying exactly the opposite. 'Hey, there's great opportunity here. We're doing it the right way. I love it. We're going to get better. You're going to help us.'"

Miller said he was told recently by a teammate that he seemed more outgoing and comfortable than he had in previous months. That resonated with him, and he recognized that it may be because he's more comfortable this year since he's around more people he knows.

He now hopes those common roots show up this season. It's conceivable that the Jayhawks could have all five players in the game at the same time. If so, Miller said, the enthusiasm and desire that they showed on the youth fields will come through.

"We need those passionate players," Miller said. "All of us are passionate about the game because we know where we come from and we know what we could be. We could be a whole lot of other places here but we're here. God led us here, so it's important. Relationships, in high school, our team, my team, was super close, and if we can get that closeness with this team, that's going to make us 10 times better just off relationships. Forget about on the field. If we're closer, we're better, and we're closer now."

And Gervin, who since he was 14 has spent each summer as a volunteer coach for the Cubs, doesn't want that feeling to disappear.

"A lot of the guys from Detroit have a chip on their shoulder," Gervin said. "I would say that for sure. We're different. Tenacity to the game. I definitely agree with him 100 percent."

Is it true that KU's first football game is Friday on ESPN+? It's time to dust off the calendar.

Back in the early 1960's, the Detroit Lions would be "sky high" to face the Green Bay Packers on Thanksgiving Day.

Several of the Detroit Lion defenders went on to the Pro Football Hall of Fame, including Alex Karras.

Kalon Gervin will be the next Dick "Night Train" Lane!

Marvin Grant will be the next Yale Lary!

Lorenzo McCaskill will be the next Joe Schmidt!