Kansas football depth chart projection: Who is standing out for the Jayhawks? 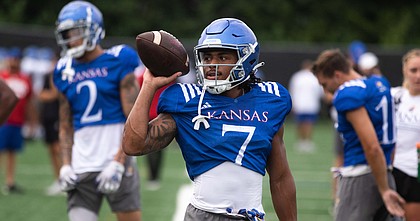 The Kansas football team wrapped up its second week of preseason training camp on Monday and has a little over two weeks remaining until it plays Tennessee Tech in the season opener at David Booth Kansas Memorial Stadium on Sept. 2.

As such, what the team will look like in coach Lance Leipold's second year is beginning to take shape. Some roles are evident and others are in flux, and several will continue to remain fluid even beyond the start of the season.

Here's how the Journal-World sees the Jayhawks' depth chart based upon observations from practice and conversations with coaches, players and others around the team.

Leipold has said Daniels, a junior, is expected to be the starter come Week 1. Quarterbacks coach Jim Zebrowski said that's because of the way Daniels finished last season and how he handled spring practice, which he missed in part as he recovered from ankle surgery. Bean, a redshirt senior, started nine games last season but has looked sharp in practice as he pushes Daniels. Ben Easters, a redshirt freshman, and Ethan Vasko, a freshman, are battling to be the third-team quarterback; Vasko has been impressive thus far but neither are expected to play barring catastrophe.

Neal, a Lawrence High grad, will shoulder the rushing attack after a breakout freshman season but will have help in the backfield. Thomas, a Topeka native who transferred from Minnesota, and Hishaw, who missed all of last season with a hip injury, will spell Neal. Morrison, a transfer from Nebraska, and Locklin offer versatility especially in the passing game but will have to stay healthy. Offensive coordinator Andy Kotelnicki has said having two-, three- and potentially even four-back sets is a possibility.

A fluid position that will need more time to sort itself out. Arnold is a big target, Grimm has experience playing outside and inside and Wilson is reliable in the slot. Emilien, a transfer from Minnesota, provides speed and can also move inside. Much is expected from the younger wide receivers, especially Scott, but their opportunities may be limited.

In the mix: Will Huggins

The tight ends have been rotating extensively throughout training camp, but there are high expectations for Kardell, a tall, athletic redshirt sophomore. Kotelnicki said blocking for the running backs remains a priority given the depth at the position but part of being a multiple offense also means using the tight ends in a variety of ways, whether that's as receivers or as blockers in the backfield or in space.

Kansas lost only one starter from last season in Malik Clark and Ford should move from right guard to left guard to fill in for him. Reed-Adams has struggled to control his weight but will get the opportunity to establish himself as a starter. Leipold wants to identify backups at tackle, guard and center; Puni and Doiron, transfers from Central Missouri and Buffalo, respectively, should be the sixth and seventh linemen. Versatility is key on the line; coaches want to cross-train players at multiple positions. Offensive line coach Scott Fuchs said Livingston, a freshman, is "the type of guy we're looking for" but likely will only play on offense in an emergency.

The oldest and most experienced unit on the team, the defensive tackles will be charged with stopping the run. Burt, in his sixth season, and Sampson, in his fifth, will get the opening reps at a position that heavily rotates players. Taylor started four games last season as an undersized redshirt freshman and has put on nearly 50 pounds. It's possible all eight players appear on defense in a single game.

Phelps, a transfer from Miami (Ohio), will line up at strongside defensive end and lead the Jayhawks' pass rush. On the other side, Lee and Robinson are competing to start; Lee gets the nod for now, but Robinson will likely play significant reps. Hatcher and DeBose should rotate in, with Hatcher serving as Phelps' primary backup. DeBose and Petrus can play both sides.

The position with the most change from last season. Linebackers coach Chris Simpson said Young, from Ohio State, "fits in really well" as the hawk linebacker, a hybrid strongside linebacker/strong safety role. He's fast, rangy and a hard hitter. Miller emerged last season as a reliable tackler and Berryhill is, according to Simpson, the most improved player at the position. Gilyard and McCaskill, from UCF and Louisiana, respectively, are similar run-stopping middle linebackers but Gilyard gets the edge as he joined the team in January and McCaskill only did so earlier this month. The top six players should play significant snaps.

Gervin immediately stabilizes a position that relied heavily upon youth last season. It seems likely he'll move inside to cover the slot in obvious passing situations, leaving Dotson and Bryant outside. Dabney, too, is poised to play snaps in the slot when needed. McGary is a wild card; a seventh-year senior transfer from Utah State, he only recently joined the team and is recovering from injury.

Perhaps the Jayhawks' marquee transfer, Grant started all 13 games at Purdue last season. He has yet to take consistent reps with the first team but figures to be paired with Logan by the time the season starts. Grant should settle in as the boundary/strong safety with Logan moving to field/free safety. Paul, a transfer from Eastern Michigan and Rutgers, is a versatile defensive back who could even back up Gervin in the slot.

Very excited to hear that we are going to be a run first offense.. but balanced....Coach worked with Solich at NU...so running some of that Nebraska I-formation and running some wishbone or full house sets...sprinkle in some dink and dunk passing...should keep the chains moving....very pumped to see what coach is going to do....during August I am so jacked up...so I watch old games on youtube ..this year I am watching games from the late 80's and early 90's....the football played then was a lot higher quality than today surprisingly...mainly because it was run first football...some of the stuff Lou Holtz ran at ND just might be something that would work here...he ran wishbone...Power I...all kinds of stuff ...if any coaches read this and I hope you do visit this site ...check out some of that...you will enjoy it and it might give you some stuff you can use......plus NU...OU...CU...all great running teams...just some thoughts...I am one of your biggest fans...sending out good vibes your way!!!

No real surprises, or did I miss something? Nice to get some confirmation of what we’ve been expecting.

Excited to see how it plays out on game day; rotations and play calling. Should be lots of rotating in week 1.

Tennessee Tech lost 50-something to zip against their only fbs opponent (Tennessee) last year. Kind of an indirect barometer, but hopefully, mostly a good get the kinks out warmup for West Virginia in week 2.

Some O & D players share the same number. Generally speaking, do players tend to build a numerical affinity? Cheer more for their number on the other side of the ball?

Kinda surprised Potter not (maybe) starting at LB. He had some good games to close out the season. If this pans out we're definitely bringing in better talent which is great news.

I don't like shared numbers....there are 100 numbers....if a shared number is required...it should be with freshmen and walkons who aren't going to be playing...that's how it use to be...I am old school...I like it that way....no reason to share numbers for starters and regulars.

Got to thinking, everybody’s opportunities increase the longer we control the ball. Well, everyone on O, but somehow I think the D players will be okay with it if the O is controlling the ball and scoring points.

Pepper likes what he seeing from Coach and his staff and loves these players...keep working hard and play HUNGRY!