Lawrence 'LJ' Arnold focusing on future, not past, during Kansas' training camp 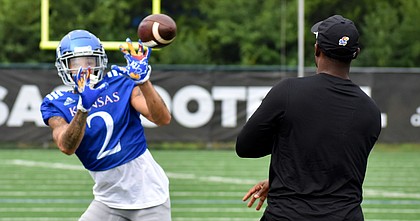 Kansas wide receiver Lawrence "LJ" Arnold is eager to move beyond the circumstances that led to him deciding to transfer in April, only to rescind that plan a few days later and remain on the team.

Arnold, a redshirt sophomore, said Tuesday after the Jayhawks' seventh preseason training camp practice that conversations with coach Lance Leipold and his mother, O'Linda Bates-Cain, helped him recognize he had a role on the team.

"I just want to be back with the team and just move forward from there and just look toward the season," Arnold said.

A dozen players, including wide receivers Kyler Pearson and Majik Rector, chose to transfer from Kansas in the days following the spring game. On April 19, Arnold wrote on his social media accounts that he would be next, but he never formally entered the transfer portal and deleted his posts in the ensuing days.

What made Arnold want to leave remains unclear. Leipold said Monday that Arnold's decision to leave was influenced by "looking at friends leave," and Claude Mathis, who was Arnold's coach at DeSoto High in Texas when he was a senior, said at the time that Arnold told him he was struggling with his role and the departure of former wide receivers coach Emmett Jones to Texas Tech.

Arnold said Tuesday that it was "more of a mental thing" that led to his decision to leave.

"I kind of feel like it was me overthinking a lot that was holding me back," Arnold said. "I love Coach Jones to death. I've known him for a long time, but him leaving wasn't part of my thought process. I kind of like to follow my own path and go my own way, so with a lot of people leaving last year, it kind of didn't change how I felt because at the end of the day, the guys on the team are my brothers."

Leading receiver Kwamie Lassiter was a sixth-year senior last season, and Arnold, who is 6-foot-3 and 200 pounds, seems poised to assume a larger role in the offense as a big target who can stretch the field.

"He brings his uniqueness to the table," said wide receiver Doug Emilien, a redshirt sophomore who transferred to Kansas from Minnesota during the summer and is only getting his first impressions of Arnold in training camp.

One of Arnold's primary goals during training camp is to emerge as more of a leader for the unit, which he said has only strengthened over the summer. Notably, he said, when one of the wide receivers wanted to work out, they'd all do so — something that was evident Tuesday when he, Emilien and Luke Grimm spent extra time catching passes after practice before meeting with reporters.

And that togetherness is ultimately what made Arnold want to stay.

Kansas WR Lawrence Arnold on his growth, approach to training camp by KUsports.com

First-year KU wide receiver Doug Emilien on the transition to Kansas & his goals for 2022 by KUsports.com

Kansas WRs coach Terrence Samuel on his players' development in camp by KUsports.com

Did anyone else think of Russell Robinson when they read this? For those who don't know or remember, Robinson wanted to leave KU after his first year, but his father talked him out of it, then he ended up being a key part of the 2008 national championship team.

I would love to see Arnold be a huge part of KU starting to turn things around, and I especially love the quote about him: "And he'll block. He's grimy, too."

Len - I didn’t think of RussRob but it absolutely fits. There was another article where it sounded like talking with Coach helped solidify his place on the team.

Do love the grimy quote. Great that Doug has the relationship with Ky and Ky with Devin. It is easy to see them working that much harder for each other, and celebrating successes together.