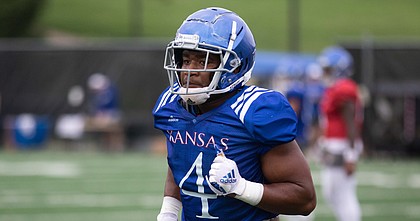 Devin Neal always knew he wanted to be different.

The Lawrence High graduate grew up watching the Kansas football team struggle year after year but his fandom never wavered. When he was extended a scholarship by former coach Les Miles during his junior season and accepted it in March 2020, it was only natural that he'd take it. 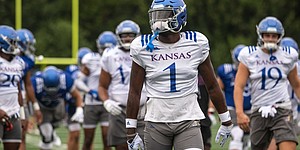 What Neal didn't know at the time was just how different his decision would be. Of the top 15 high school football players in the state in the class of 2021, according to Rivals.com and 247Sports, he was the only one to choose Kansas. Only one — safety Mason Ellis of Mulvane — decided to do so last year, and none are in line to do so this year.

Neal, a running back who is set to begin his sophomore season at Kansas, isn't surprised that has been the case but stressed that it won't be true for long. He said he still has relationships with several players who will be high school seniors this season and has remained active in sharing with them what he believes are the benefits of playing at Kansas.

"My message to them is kind of like, don't be afraid to take risks," Neal said last month at Big 12 football media days in Arlington, Texas. "I feel like that's kind of the key to getting them to come to KU. It's a risk. It's an investment they're not necessarily willing to take, which is fine. But I think we're going to be on the verge of doing something really cool, and so I don't want them to miss out on that. That's what I kind of hint at."

Neal, who also plays baseball for the Jayhawks, was not just the No. 1-ranked player in the state as a high school senior. He was one of the top 15 running backs in the nation, received interest from several colleges and chose Kansas over Kansas State, Oklahoma State, Iowa and Nebraska.

Of the top dozen players in the state in the class of 2023, according to Rivals.com, five have already chosen to play for Kansas State. That doesn't include running back Dylan Edwards, a running back from Derby who committed to the Wildcats in late June before switching to Notre Dame on Saturday.

Neal mentioned Edwards and Free State offensive tackle Calvin Clements, who committed to Baylor over Kansas and Kansas State, as two high school seniors whom he continues to speak with. He did not share the details of their conversations — or whether they even listened to his pitches. 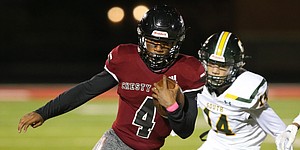 Lawrence High running back Devin Neal takes off up the sideline past Shawnee Mission South ...

Clements, who on June 30 said he would attend Baylor, said that night that he thought for a long time he would stay in the city and play for Kansas. He wanted to take each of his official visits, however, and left Baylor, which received the final visit, believing "it was where I needed to be."

"I listened to the (Kansas) coaches a lot on the visits and over phone calls and trusted — and still do trust — that they're going to turn that program around," Clements said.

What may prove to be beneficial for Kansas is that coach Lance Leipold and his assistants are only entering their second season at the university. Leipold was hired on April 30, 2021, following the resignation of former coach Les Miles a month earlier and the appointment of athletic director Travis Goff earlier that month, and was at that point already behind in recruiting.

Leipold's first full recruiting cycle will culminate with the class of 2023, and he has recognized the challenges of getting those in-state players to buy into the program like Neal did. He said one told him he wished he were part of the class of 2024 because it would then be easier for him to choose the Jayhawks.

"Much like turning this program around, that's not going to be a light-switch fix, either," Leipold said Tuesday. "I think as we continue to show our consistency just in how we go about our day-to-day operation running this program, and I think as we deal with young male football players in the state of Kansas, I think they're going to see that and hopefully, appreciate it. We know that there's fine talent here and we're continuing to do everything we can to be able to continue to keep them right here in Kansas."

Neal backed up his decision to do so by rushing for 707 yards and eight touchdowns on 158 carries as a freshman last season. Two weeks ago, he was among the 73 players named as preseason candidates for the Doak Walker Award, which goes to the best running back in the country.

Perhaps if he and Kansas can succeed together, others will be interested in following his path, whether it's down the street or across the state.

"Personally, I think it's a risk some people aren't ready for yet," Neal said. "I like challenges. I was devoted to changing the program. Others, they look at it a little bit differently. They want to be successful right away — which is fair. I absolutely respect that.

You just can't help but like Devin Neal. He is truly a unique individual with an imaginative and optimistic outlook on things. And he's a heck of a running back. Really glad we have him, and looking forward to much more from him. I will not be surprised to see him in the league one day.

Well, Calvin Clements and others, if you really do believe this team is turning around, then come help make it happen. It will happen more quickly if we could just get you really good Kansas players to join us.

There’s only one football season between now and when a 2024 graduate is likely to commit. The season will be played before 2023’s actually sign. I wonder if maybe we will have some players decommit to sign with us. That would be a nice change.

While the purple people are doing better than us, it’s not like they are controlling the state either. There’s not enough players to build an entire program instate, but there’s so much that is leaving to play elsewhere.

Build it and they will come.

As a reminder, winning the state in recruiting is like winning at weightlifting. It's not and never should be the goal. Who really cares? We cling to this idiotic goal because it's some sort of imaginary victory.

If we land 25-ish 3-star recruits on a regular basis, develop them and do our jobs on Saturday's, we will compete. Everything else is a major distraction. As fans of KU football, one thing we can do is to quit asking coaches to do something that has absolutely zero impact on winning.

Winning at weightlifting is not and never should be the goal, but it most definitely is part of being successful.

The fact that the coaches have identified instate recruiting as significant would seem to indicate that it is important, or maybe they are just idiots.

Devin Neal was an important part of our team last year, and winning against ut. There are many other KS HS football players that have contributed to the success of other programs. It would most definitely have an impact on winning at KU if they were contributing to our team instead of others.

Attendance at games hasn't come up yet, but there is a correlation there as well.

Instate recruiting is not the goal. It's just part of being successful, and definitely more than absolute zero.

I am happy to report that the official KU athletics website has finally updated the KU football roster for 2022. They have added the summer transfers, the incoming freshmen, and several "preferred walk ons" most of them from the State of Kansas.

If we can build a successful "walk on" program for Kansas players, that will help us in reaching the ultimate goal of controlling the local recruiting turf (or at least holding serve). Jared Casey is a prime example.

One omission from the roster, I cannot find the Lawrence High placekicker that was going to "walk on". I do not remember his name, but I thought he was going to join the team this fall.

Keep in mind that the in-state players and those around them have seen and heard constantly bad things about KU football for many years. Conversely, a kid from a far away place, along with his family and friends, hasn’t been bombarded with bad KU football news on a daily basis for many years. Thus, it’s logical that it will take multiple successful winning years to start getting the in-state recruits that KU coaches want.

Thanks for the update Edward.

Rodney - Very valid comments, though I would suggest that multiple successful winning years to start getting the in-state recruits is a bit extreme. The in-state recruits definitely want to see more than the random shorthorn upset and close losses against the bottom. That’s why the first 4 games this year are so important. Have we actually made progress?

It would be great to have more Fighting Jareds.