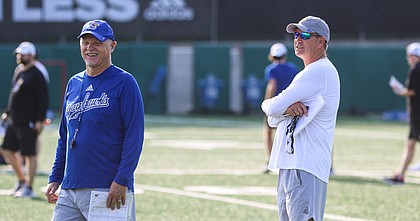 Kansas defensive coordinator Brian Borland said Thursday that linebacker Lorenzo McCaskill's transfer from Louisiana will provide the Jayhawks with an accomplished player at a position that could have benefited from the addition of someone with considerable experience.

McCaskill, who participated in practice for the first time on Thursday morning, is a 6-foot, 220-pound sixth-year senior from Detroit who was named to the All-Sun Belt second team last season.

He played inside linebacker in Louisiana's 3-3-5 scheme, which is slightly different than the 4-3 base defense the Jayhawks use, but Borland isn't worried about how he'd adjust to his new team.

"He's an inside linebacker, probably more of that middle linebacker spot for us, so I'm sure that's something similar to what he did (at Louisiana)," Borland said. "Kids are adaptable. He'll learn our scheme. He'll adapt, and there's things — even though it's a different alignment and things like that, a lot of it's still the same. Football is football, so I don't have any problem or any worry that he won't catch on or he won't fit in."

McCaskill's transfer was delayed as he finished his undergraduate coursework. He spent his first season at Holmes Community College in Goodman, Mississippi, before transferring to Louisiana in 2018, and he started all 23 games over the past two seasons for the Ragin' Cajuns, who won the Sun Belt both years.

He decided to leave Louisiana in January, after coach Billy Napier was hired at Florida, and initially received interest from schools such USC and Tennessee. He waited, however, in order to find somewhere he could play more frequently.

A childhood neighbor of redshirt junior cornerback Kalon Gervin, who transferred to Kansas from Michigan State in January, McCaskill was recruited by the Jayhawks' coaches while they were at Buffalo. He is the latest and final addition to a position group that has undergone significant change since last season ended.

Borland said the coaching staff's goal in recent months has been to add "more competitive Division I football players" and was able to do so with the quartet's additions.

"I think the increased competition, I think it makes everybody better," Borland said. "Now it's just a matter of really trying to figure it all out. You kind of let it sort itself out a little bit. Eventually, I think the cream's going to rise to the top. There's no doubt we'll get the right guys on the field."

Logan, who plans to continue returning kickoffs for the Jayhawks, was also named to the All-Big 12 preseason team.

Borland said he expects Marvin Grant, a 6-foot-2, 205-pound redshirt junior who transferred from Purdue, to play a lot of snaps this season but still has to see how he fits best in the defense.

It seems likely Grant, who started last season for the Boilermakers, will resume that role alongside Logan, but the two have each taken snaps as the boundary safety during the first three days of camp.

"Marvin is pretty good, a natural football player," Borland said. "I think he likes to be physical, so those are some things if you just look at his stature — he's tall, he's long — he kind of gives us a different look back there."

I think this is big. Ideally, we would have had him here for the spring, but as a sixth-year guy, I'm guessing he picks up things quickly.

Great news to hear that he is practicing. I hope and expect to see him a lot this fall!

Each level of the D has one or two potential new difference makers, as well as others to add depth. We have a lot of ground to make up on everyone else. Just having by far the most returning experience would only make up so much of that gap, but adding these new experienced players should be worth quite a bit more. Even if they just added depth, so that Potter and Miller aren’t playing every down, there would be an extra step of improvement. Really excited for September.

The linebacker play last season was an obvious weakness, to fans and coaches alike. More bodies and more competition can only help the returners improve and enhance the overall depth.