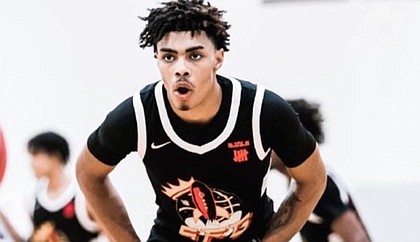 Long before new Kansas basketball commitment Chris Johnson could drive, former Texas Longhorns star T.J. Ford would pick him up and take him to whatever gym he needed to go to.

The two are from the same neighborhood in the Houston area, and Ford, who has long been a basketball mentor for young hoopers in his home state through his T.J. Ford Basketball Academy, always wanted to make sure he did whatever he could to help Johnson live out his basketball dreams.

One of those came true on Tuesday night, when Johnson, a senior-to-be at Montverde Academy in Florida, announced his plans to attend KU in front of roughly 100 people at Ford's training gym. Ford was there, of course, and like Johnson’s family and friends, he, too, carried a smile that could not be missed.

“Chris’ ultimate goal is to play at the professional level, and the first step in that is picking the right school,” Ford told the Journal-World in a phone interview on Wednesday morning. “He’s a high-caliber basketball player and we weren’t surprised at all that he picked Kansas.”

Ford, 39, has plenty of memories of Kansas basketball from his two seasons at UT. He faced KU twice during his two seasons at Texas. Although he never defeated Kansas, both the Longhorns and Jayhawks reached the Final Four in 2003. Ford understood then what a big-time program KU was, and he’s even more excited about that reality now that Johnson is headed to Lawrence.

“What coach (Bill) Self and that program has done there speaks for itself,” Ford said Wednesday. “And they’ve shown that guys like Chris can flourish there.”

That was the exact message Johnson got from the Kansas coaching staff during his official visit last week. Whether they talked about the role he would play or the memories he would make, Johnson said it took next to no time for him to realize that KU was the right place for him.

“Coming in, I was still wide open,” he told the Journal-World on Wednesday. “But the first day I got on campus I knew it was Kansas. I knew I was going there.”

Several factors played into Johnson shutting down his recruitment after the KU visit. For one, he always considered Kansas to be one of college basketball’s best programs. For two, he said he liked the family feel within the program and was overjoyed by Self’s forecast for how he would fit into the way the Jayhawks play.

At 6-foot-5, 180 pounds, Johnson has the kind of physicality and athleticism to play a number of positions and styles. But it’s always been his size and strength that has aided him the most, whether on offense or defense.

“It’s really just a mindset,” he said of his physical nature. “Ever since elementary school, people always made me play with the older kids and sometimes grown men. So, I really don’t think about it. I’m just physical. That’s all I can really say. You’re going to feel me when you play me.”

Ford called Johnson “the ultimate competitor” and said he was capable of doing anything a coach wants on the floor. Need a bucket? Johnson can get it. Want someone to create for others? Johnson likes to pass and handle the ball, too. In search of a player who will dig in on defense and enjoy it? Johnson can be that guy, too.

“I love playing defense,” he said, noting that his size and physicality helps him the most on that end.

Added Ford: “He just knows how to compete. And he lives in the gym. He’s got a lot of things going for him that can make him a hell of a player.”

While Self’s reputation as one of the best coaches in the game and a member of the Naismith Hall of Fame certainly impressed Johnson and his family, the new KU guard said second-year assistant Jeremy Case played as big a role as anybody in Kansas landing him.

Johnson said Case was one of the only college coaches to actually attend a game of Johnson’s at his high school gym, and he said Case made it clear from the start that Johnson was a priority for the Jayhawks.

“Ever since the beginning of last year, he’s been there talking to me and my family; he’s built a really strong relationship with my mom and my sister,” Johnson said of Case. “(It was) a comfortable feeling. I trusted him. And he’s been rocking with me through the ups and downs in my career and been there with me from the jump.”

Johnson said his connection to the current KU roster was also an important part of his visit. He said he felt like he had known most of the guys for a long time and he already has real history with KU freshman Zuby Ejiofor. The two were teammates in the Houston Hoops AAU program.

From the fit to the family feel to the connections to current KU players and coaches, Johnson said he was swarmed with signs that Kansas was the right place for him, and he committed quickly as a result.

“Like coach Self told me, there’s no reason for you to go to any other place if you can get all the minutes here at Kansas,” Johnson said. “Kansas was a dream school of mine, so I mean, why not? I loved it.”

(Bad) video of Chris Johnson’s IG Live announcement, where he picked #KUbball tonight. The 4-star prospect is KU’s first commitment in the Class of 2023. pic.twitter.com/7RylhGgYb6

Higher commits from other schools -

I hope Chris can work on his defense, I see him as a 2,3 year player to reach the NBA Draft! Hope he is humble and willing to learn.

I watched chris play some of his games at Monteverde. He is offensively very smooth, and he can handle the ball. He fits in with the 3 or 4 ball handlers bringing the ball fast up the court that Coach Self has going now.
He doesn't seem to play much defense, but that will come. Definitely a great addition, and a player with a really big upside.

I don’t remember if it was here or the Phog that included interviews with his dad, but there was lots of comments about wanting to learn. The scouting reports I’ve read indicate he can flash D, though it’s not consistent at this time. We all know Coach Self will emphasize D, so I’m guessing Chris will learn to embrace the D just as the others have recently.

At this time, we’ll lose Cam, and probably lose Jalen and Kevin. If we lose others it probably means we’ve either had an exceptionally good or bad year. With where we are in the food chain, it would be easy to see Coach getting one or two more transfers as needed.

Duke seems to have replaced Cal as the lead 1&done recruiter. Has it been successful? They did make it to the FF, though it’s gotta hurt to lose twice to your rival.

I thought the transfer portal was going to be the way to go, but there is a lot of NIL money at some of these schools. 1 and done is not the way to go in basketball.

He looks like a legit recruit (thanks for the info, Layne), plays with no fear, high bball-IQ with incredible court vision.. let's hope his defense will get him good minutes on the floor.
I'm excited!!!!