Junior plans to retain his college eligibility through the process 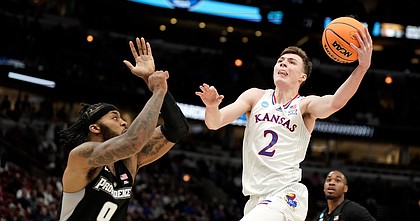 On the final day to declare for the 2022 NBA draft, Kansas junior Christian Braun did exactly that, announcing his decision to enter the draft process on Twitter late Sunday morning.

According to a Kansas Athletics news release, Braun will retain his draft eligibility throughout the process and, therefore, will be eligible to return to KU for his senior season provided he withdraws his name from the draft pool by June 1.

Kansas coach Bill Self is both hoping for and banking on that not being the case.

"We all believe Christian is a first-round talent,” Self said in the release. “We think he has a shot to go high in the draft and we are very hopeful that he does. If he doesn’t get the feed-back, he wants to keep his amateur eligibility available to him and keep his options open to return to school. I honestly be-lieve if Christian performs like he is capable of performing, he’s a guy who is talented enough that the feedback he’ll re-ceive (will say) that he can be a high draft pick and then it will be Christian’s and his family’s decision to do whatever they want to do after that.”

Self said at the team’s postseason banquet that senior guard Ochai Agbaji — a projected first-round pick — also will be de-claring for the draft and Seven1 agency announced earlier this week that redshirt sophomore Jalen Wilson had signed with them to represent him during the pre-draft process. Neither Wilson nor Agbaji have made formal announcements them-selves, but sources close to the program say both are expected to do so.

As for Braun, he leaves KU having lived out a dream, both of playing at the highest level and winning a national champion-ship.

“Just a kid from Kansas,” the Burlington native wrote in his Twitter message announcing his intentions. “That’s where I started this journey. Now, three years later, I’m a national champion. None of that would be possible, though without the best teammates, coaches and fans in the world.”

“To say I love Kansas would be an understatement,” Braun added in his announcement. This place is be-yond special. No matter where life or basketball takes me, I will be a Jayhawk forever and represent this program to the best of my abilities. … Thank you for your support every time we stepped on the court representing this amazing basketball program. Forever a Jayhawk.”

Check out what Sunday's announcement means for Christian Braun and his future in the latest Tale of the Tait blog...

Did Bill say in which year we believe CB is a first-round talent? CB should take every advantage that this process offers. CB has contributed so very much to our program, and deserves all the success possible.

I hope people will allow him to make the decision that is best for him. He is a valuable guy to have stay one more year, but if it is not in his best interests he shouldn't.

Good luck CB. Would love to have ya back next year but hoping that you make the best decision for your basketball career to be a long one. Thanks for helping bring home a national championship.

Bill Self might have one of his most challenging rebuild/reload period in his coaching stent at KU. Can you imagine of the top eight players towards the end of the 2021-2022 season, Dajuan Harris would be the only returner. Starters who could be gone are Agbaji, McCormack, Wilson, and Braun. Backups who have exhausted their eligibility- Lightfoot, R. Martin, and Coleman-Lands. Plenty of opportunities for C. Martin and Yesufu and the future redshirt freshman/sophomores (Adams, Clemence, Cuffe Jr, and Pettiford) if they stick with the program and earn playing time. Mr. Harris would be the elder statesmen of the team, based on minutes played under Self. Wow! I can see Self trying to find a few upperclassman in the transfer portal. Senior day would be rather short with C. Martin and Jankovich the only two players giving speeches.

Braun, as of now, projects to be picked in the mid-20s of the draft. Like Coach said, that could change if he goes to the combine and shows out. He is very capable of raising his stock at the combine. Personally, I think he should come back, work on being a more consistent shooter, and be that alpha that he has shown flashes of being but has not yet fully developed. Before reading this article, I would have put about an 80% chance of him returning. After reading how he framed things, I now place it at 50%.

If everyone stays in the draft, Coach would be adding a couple experienced players from the portal. There’s lots of youth across the board.

Guessing that JWil gets at least part of the same info he got last year; improve your perimeter shot. Sub30 for a wing just isn’t good enough.

CB has rode coattails but has enough alpha that it’s easy to see him showing up much more at the combine.

JWil got off to a slow start with his legal troubles. If he's back, I expect him to be the alpha.

Both will be back. Neither can shoot from distance. Jalen can only go right and even that is an adventure. Braun needs a stopwatch to time how long it takes for him to get his shot off.

Both showed big improvement from last year. Both need another year+.

Braun with his size an athleticism is an ideal NBA shooting guard, all he needs is to perfect his catch and shoot mechanics. He has good technique just needs more reps in the gym with a shooting coach. People keep saying that he's projected to be a first rounder, and I'm not denying his talent; I haven't looked at the mock drafts but I just in comparing him with other KU players past and present think he looks like a 2nd rounder after this season, but I'm not NBA GM or talent scout. So if he's a first rounder he probably should make the jump.

I got into a heated argument with a friend over Braun. He was saying that because he is white, he will get extra attention and be given more slack regarding his development as opposed to an Afro-American player. I told him he was wrong.
That might have been the case years ago, but, because of the money involved and, frankly, the emphasis on winning in the NBA , any player, black, white, brown, yellow, green etc. that can provide an impact toward a title run will be
put on the team and on the court regardless of anything except their ability to contribute. If I'm being naived...so be it!!!

Tony there is a purple guy who is the next Bird/Magic. :) I agree with you.

Ask the Bucks how they feel about 6'4 Grayson Allen right now. He is a close reminder, except for the tripping, to CB in college. He avgs. 11 points in 66 pro games, he shoots 39% from 3 in his 192 game career. In the playoffs, physical every game, he is stepping in for Middleton, the Bulls have no answers.

CB and JW should test the NBA waters. Play in the scrimmage if they get invited.

CB could also develop into the next Pat Connaughton. But, let's face it, the NBA combine is physical and grueling. The scrimmages are intense!

My Ouija board predicts that CB will be informed that he is middle second round pick material. Rock Chalk!