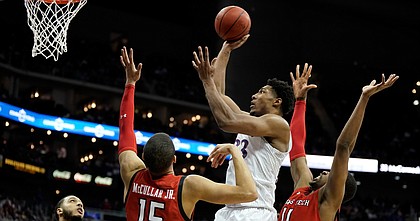 Kansas forward David McCormack is turning his attention toward chasing his lifelong dream of playing in the NBA.

On the heels of finishing his senior season by helping Kansas claim its fourth NCAA championship, McCormack announced Tuesday that he was declaring for the 2022 NBA Draft.

The announcement came early Tuesday afternoon on his Instagram page, exactly two weeks after he posted a photo of himself kissing the 2022 national championship trophy with the words “Mission Accomplished” attached to that post.

McCormack’s announcement did not mention anything about retaining his college eligibility, though he will have until June 1 to pull his name from the NBA draft pool should he still want to consider returning to college for his super-senior season brought about by the COVID-19 pandemic. 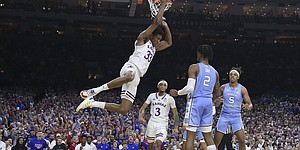 It does not seem likely that McCormack is headed down that path.

“I can’t imagine ending my career at Kansas any better than we did this past season, as national champions,” he wrote.

He also added the words “what a ride” and noted that it was “crazy to think how much I’ve grown both on and off the court — as a person and a player” during his four years at Kansas.

The words associated with the graphic announcing his decision included: “It’s been a true privilege to call myself a Jayhawk and now it’s time to chase a lifelong dream. Rock Chalk Forever.”

He appeared in 132 games and made 96 starts and was heavily praised by KU coach Bill Self for putting in countless hours of extra work in the training room just to be able to practice and perform on game nights. This season, that resulted in McCormack making 37 starts and playing in all 40 KU games.

Often criticized by the fan base and even Self for not consistently performing at the level he was capable of, McCormack saved his best for last by starring in the NCAA Tournament and, specifically, at the Final Four.

After defeating Villanova and North Carolina to win this year’s top prize, Self said the 6-foot-10 forward from Norfolk, Virginia, was deserving of being named co-Most Outstanding Player with teammate Ochai Agbaji. Self also noted that he will look into whether McCormack’s name and No. 33 jersey belongs in the Allen Fieldhouse rafters for his strong career and stellar finish.

It remains to be seen whether McCormack will get an invitation to next month’s pre-draft combine in Chicago. In New Orleans, some analysts said his performance at the Final Four likely earned him that opportunity.

Still, McCormack has not ever consistently seen his name appear on NBA mock drafts and one NBA draft analyst recently told the Journal-World that McCormack was a long shot to get drafted in the June 23 NBA draft.

If he isn’t, he still could catch on with a pro team via the free agent route or, more likely, he could wind up making a lot of money while playing professionally overseas.

“We are all excited for David,” Self said in a news release Tuesday. “What David did in the NCAA Tournament puts him in a position that he can capitalize on this. We should all appreciate everything he has given to us throughout his career at Kansas and we are certainly not national champs without his efforts and sacrifices he made to our program. This is a good day, and we respect and support David in his wishes.”

While I expect him to officially turn pro, I still wouldn't be surprised if he decides in the coming weeks to return to KU for a super-senior season. He has lots of good options in front of him and whatever he decides will be a good decision.

Dave is a legend now and wish him nothing but the best in life. IF, the NBA isn't drafting him and his foot is fully recovered, a return to the limelight at KU (and some NIL money) might be a great option. Show what you can do fully healthy!

Lots of ifs and buts with this one, and I totally get all of the reasons and scenarios. But I'll go on record saying that I will be shocked if McCormack is back at Kansas next season. Felt that way all season and feel even stronger about it after seeing how he finished his senior year.

The biggest question I have is whether he'll get a combine invite.

McCormack played through a lot of pain that most of knew nothing about until near the end of his career. He also is an excellent student. I never met David but I would have been honored to have the opportunity to call him my friend. I wish you the very best, David McCormack, in whatever your next move (I wouldn't mind at all if you decided to return to KU for another year, though!).

He left on a high note. If not the NBA, he will make his Millions overseas. It's a no-brainer for him. His stock is a high now as it can be.

I don't see him coming back, in his case, I don't know that his stock would be any higher next year. W/o a long-range jump shot, NBA prospects are definitely limited, though he could easily be a bench player to come in and perform inside. Or, get out of here D-Mac & go see the world, he'd definitely star overseas.

I agree Matt. 90% he leaves - likely a G League contract, 10% he takes OA's route of last year. He is at the apex right now, he should try to get paid.

Definitely the right decision. D-Mac has already got his bachelor degree and will soon get his master's degree, and he brought us a national championship. He doesn't owe us anything more. Besides, if we get a postseason ban for 2023, then he'd be wasting a year of his life playing in a KU uniform. I hope he makes a good living for himself playing professionally, whether in the NBA or some other pro league, and I hope he makes his dream of being a sportscaster come true!

He could go out on a higher note if he were to return, be dominant all year, and lead the team to another championship.

Based on the wording of the announcement though I’d give about a 1% chance of him returning.

He got his degree in 3 years and is at least part way through a masters. He’s gonna succeed regardless.

This is a bright young man with good communication skills. When he finishes his playing days I can see him joining the coaching ranks.

Good luck, Dave! And thanks.

Matt, I wonder if one June 1, or after, we can get a (near) final read-out by all those leaving or contemplating leaving. Would love the know the disposition of other seniors. I can't imagine any of the players with significant PT not wanting to pursue being connected to sport somehow.

For instance, where does Lightfoot go? What does Remy choose to pursue? We got to see 40 games with these kids this year. You feel like you know them. Great human interest story to read about where they all end up.

That said, I have a feeling, these team members will be life-long friends whether one goes down a coaching path like Self, gets paid to play overseas, does the NBA or G-league, or whatever Like Veterans going thru war together and staying friends forever, these guys fought battle after battle, then won their own war. They will probably have each other on speed-dial.

I think this is for the best for both team and player. McCormack leaves on the highest of notes, a legend, and KU gets to focus on the next era of big men. I'm really excited about the futures of the bigs we have on next year's roster.

It is difficult to "extrapolate" Big Dave's NBA potential, because he will need to develop a perimeter shot. Since he is a good free throw shooter, he might be able to develop into a good 3 point shooter, almost a must in modern day NBA (unless you are Rudy Gobert). Good Luck!

The only reason to come back would be if he secured some serious dough with an NIL deal. That and he might just complete a doctorate. David may not play in the NBA but he strikes me as a guy who may be running it in 10 years.

I would venture to guess that this was twofold. One, he wants to chase his dream and he should. Two, look..... we've got some depth at the big man spot with existing and incoming guys and probably put ourselves at risk to losing one or two of them if he returned that the staff didn't want to lose. I'm sure everyone in KU blue would say otherwise, but let's be honest...... with the transfer portal and guys able to freely move around we're seeing some big time guys leave places. At the end of the day, I wish him the best and I hope he makes a roster. He gave us everything he had and played a big role in winning the SHIP!! RCJH and thank you Big Dave!!

I appreciate how David' played the game with passion and intensity. His last 2 games were the most meaningful, but his unending resolve to do his best was contagious and certainly a boost to team members. I wish him the best of all outcomes moving forward.

The average sized NBA center is 7'0" these days, not 6' 10". With David's inconsistent play, relative shortness for a 5, combined with no long-range shot, it appears to be an uphill battle to make serious NBA money this year. I hope I am wrong, but this is why I think the odds are greater for a return than what is noted above by most commenters. I do think he could get some serious NIL money if he returned. He would be loved to death by local KU fans. Maybe not Patrick Mahomes level, but significant. Maybe he'll get a PhD and become, Dr. McCormack. I wish him all the best!

Although having Dmac would be a luxury it would also be a setback moving forward because you need to develop Zach and Udeh next year and Dmac would eat up minutes that would otherwise go to Zach and Udeh . Dmac went out on top with a Natty and and degree so its time for his next challenge . Thank you Dave and all the best to you moving forward ....you are forever a Jayhawk

Mallory
Great point. Next year will be a developmental year. We will compete for the conference championship, but we will have a lot to accomplish before the conference season begins.
Clemence, Udeh, even Cam Martin, all need a lot of game reps. David is going out on top, there is nothing better than that.

On somewhat of a related note, the big man for NC and for Kentucky (aka POY) are coming back next year. I assume their decisions are adversely affecting the development of up and coming players. I wonder how that is being perceived. NC and Kentucky are now ranked number 1 and 2 in the CBS pre-season poll.

KU fans will forever appreciative that the “good” Dave showed up when it counted. The run to the national championship, which in all honesty was never a given, was truly a team effort. Without each player stepping up when it counted, Jayhawk fans would not be basking in the team’s glory. Best of success Mr. McCormack at the next step in your professional career aspirations and most importantly life. Thank you. Rock Chalk.

Good luck Big Dave!!!....You need to keep really working hard...you have not reached your potential yet....to play with the BIG BOYS...it's going to take a championship level of play every night out...we will be watching you with interest...take care!!!!

Wishing you all the best of the best, Dave!!! Come back if things don't work out! 2 NC ring is waiting for you!