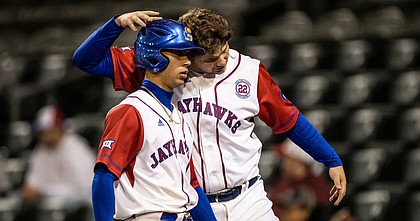 Kansas City, Kan. — Tavian Josenberger has visited the Negro Leagues Baseball Museum before, but wearing a uniform reminiscent of one worn by the Kansas City Monarchs on Tuesday — and with No. 22 on the back — resonated with him in a different way.

"It just means that much more," Josenberger said. "Getting to understand what these jerseys represented is really special for us, getting to wear them now."

Josenberger and the rest of his Kansas baseball teammates donned an ensemble inspired by the Monarchs' most famous look — a white shirt with red sleeves and arched lettering and a large "KU" in red on a white hat.

They did so Tuesday as they hosted the Buck O'Neil Classic, a game against Texas Southern conceived to honor the legacy of O'Neil, the former Negro Leagues player and manager who helped establish the museum and will be inducted into the Baseball Hall of Fame in July.

Kansas won 7-6 at Legends Field, the home of the minor-league Monarchs, after Josenberger scored on a sac fly by sophomore Maui Ahuna in the bottom of the eighth inning. The university intends to make the game an annual event and continue to invite a historically Black college to serve as the opponent.

Texas Southern wore uniforms similar to those worn by the Homestead Grays, a traditionally Pittsburgh-based team that competed in the Negro Leagues, and even the umpires commemorated the occasion by wearing black suits and ties and newsboy caps.

Kansas coach Ritch Price said he wanted all of his players to wear No. 22, O'Neil's number, but the request was denied by the NCAA. Thus, they all wore patches with the number over their heart, and Josenberger, who graduated from Park Hill High in Kansas City, Missouri, was chosen to wear it for the game.

"He's just a legend — and a Kansas City legend for sure," said Josenberger, a sophomore second baseman. "Playing on the Monarchs, coaching, being the first African-American coach in the major leagues, it's super special for me to wear this 22 and I'm honored."

The game was created through a series of conversations among Price; Paul Pierce II, Kansas' associate athletics director for inclusive excellence; and Jay Hinrichs, the president and general manager of the minor-league Monarchs.

Price took the baseball team on a guided tour of the Negro Leagues Baseball Museum in the fall, and from that experience, he knew he wanted to find a way to continue to expand the knowledge of the game's past.

"When we got together, he was like, 'What if we did something at Legends Field?'" Pierce said. "I was like, 'That's a great idea.' And then the next thing you know, our equipment staff is talking about, 'Hey, what if we created replica jerseys that honor the Negro Leagues?' And, 'What if we do something to honor Buck O'Neil?' It really was a collective effort by folks who wanted to create something unique for our student-athletes."

Price, who is in his 20th season as the Jayhawks' coach, said he never met O'Neil but had a chance to hear him speak on several occasions. He was often struck by how O'Neil, who died in 2006 at 94, spoke so passionately about the game despite the discrimination and hostilities he often faced because of it.

"I think it's amazing that that gentleman could have played in the big leagues and was denied the opportunity, and could be so positive about baseball and everybody he met with in the game," Price said. "I don't know if anybody means more to Kansas City than he does."

Texas Southern coach Michael Robertson, who met O'Neil at the MLB All-Star Game in Houston in 2004, said O'Neil was one of the most "influential" people in his life. He had the team visit the Negro Leagues Baseball Museum on Tuesday before the game.

"This event here, they would not be able to understand it unless they go to the museum and see all of the artifacts and all of the guys that participated in the Negro Leagues — and then, of course, Buck O'Neil," Robertson said.

Because plans for the game were only drawn up in December, "we just wish we had a little more time to tell the story about what the Negro Leagues really were," Hinrichs said. Pierce said he could envision future installments of the game supporting the teams or the museum, financial or otherwise.

Kiona Sinks, the community engagement manager for the Negro Leagues Baseball Museum, said before the game that she was thinking about a conversation O'Neil once had with Bob Kendrick, the museum's president since 2011. Kendrick asked O'Neil about what had motivated him to create the museum.

"His words were so succinct and so pointed," Sinks said. "He said, 'So they could be remembered.' They're being remembered today through KU baseball."

He must have asked the NCAA in 2001! Maybe he was waiting on response to wear the uniforms lol

Kansas owns Texas Southern in baseball as well as basketball, I see.

Uni's look great. Fantastic idea by all involved. Glad to get the W!

Don't get the black suits reference...Was that how they dressed showing up to a game in the Negro leagues?

Armen....you are a simple minded racist. Not clever. Certainly not thoughtful or humane. What is so bad in your life to make you this way? I think that Dirk would recommend an alphabet vitamin to get you back on track.