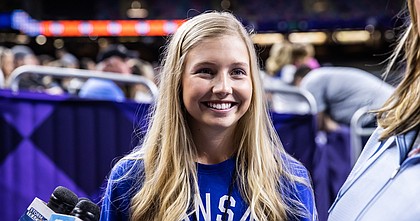 New Orleans — Hanna Hawks sang at her high school graduation. She has sung at her church.

Come Saturday evening, she'll be performing on a much bigger stage.

"Nothing compares to the Superdome," Hawks said.

A sophomore on Kansas' women's golf team, Hawks will represent the university by singing the national anthem before the Final Four.

Women's golf coach Lindsay Kuhle let Hawks know about the opportunity earlier in the week. Hawks filmed herself singing the national anthem at the practice facility, learned she had been chosen Tuesday night and flew to New Orleans late Thursday.

Hawks, from Wellington, sang in the choir and performed in the theatre program at Trinity Academy in Wichita. She won the Class 4A girls golf championship in 2018 and has a 76.3-stroke scoring average in 10 events this season.

She and her fellow performers sang together for the first time Friday.

"Never in a million years would I have dreamt that a situation like this would have come about," Hawks said. "Super excited about it."

Here's a look at our coverage from New Orleans so far:

• Hi Mom: KU coach Bill Self’s mom has been back in the bleachers for KU’s run to the Final Four

• Bill Self, Jay Wright agree – 2018 matchup has no bearing on this year’s game

• Photo gallery from Day 1 of KU-Villanova

• A quick capsule glance at Villanova

Kansas' Bill Self, players speak prior to facing Villanova at the Final Four by KUsports.com

Kansas' Remy Martin on his decision to transfer from Arizona State and joining the Jayhawks by KUsports.com

Kansas' Christian Braun on the lessons learned after losing at TCU by KUsports.com

Kansas guard Christian Braun during media breakouts at the Final Four in New Orleans by KUsports.com

Kansas' David McCormack on his motivation during the Final Four by KUsports.com

KU senior Mitch Lightfoot on the Final Four experience & the end of the road for his career by KUsports.com

Open practice highlights from Kansas basketball at the Final Four in New Orleans by KUsports.com

Great representation for KU and Wellington!