Kansas volleyball bounces back with 4-set win over Oklahoma

After dropping the opening set to visiting Oklahoma, the Kansas volleyball team picked up a much-needed victory over on Saturday afternoon, winning 24-26, 25-14, 28-26 and 25-22.

“Proud of our team,” Kansas coach Ray Bechard said after the victory. “I thought we came back after dropping the first set and competed hard after that. It was a typical Day 2, where the opponents know each other, so the hitting efficiencies aren’t going to be that high. We served it better today and I thought we were good defensively and got enough offense to make it work.” 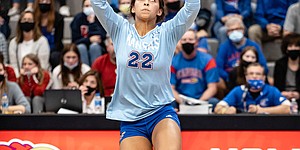 KU setter Camryn Turner locks in on the ball during a point in the Jayhawks' ...

Kansas was led by the stellar play of sophomore middle blocker Caroline Crawford, who set new season-highs with 13 kills and 10 blocks. The 10 blocks tied a career-high.

Next up, the Jayhawks will travel to West Virginia for two matches next Thursday and Friday. Both matches will be televised on ESPNU.

Is it too early for the comments to fire Coach Bechard?

Heck no! Bechard needs to go.. He has turned this program from a national power into a league bottom feeder. Fans can only hope the new athletic director will change the LIAD culture and instead of supporting losing coaches fire them to start to build a championship caliber team.

Not sure about Bechard. The "top assistant" he lost that was on staff during our glory years was Bird Kuhn, she's not exactly tearing it up at Texas A&M, currently 11-9 overall and 4-6 in the relatively weak SEC.

Something we could do that would help us win the rest of our matches in the conference would be to take Jenny Mosser out when she rotates to the back row. Her serve is not that great and she makes too many service errors, currently has 42 service errors against 22 aces. She also leads the team in return errors with 32 (Bien is 2nd with 17). We rarely utilize Mosser as a back row attacker so that's not an argument for having her play back row. I think taking Mosser out when she rotates to the back row would be worth 1 or 2 points per game. Since she's played 79 sets that is a total of 74 point give-aways of almost 1 point every set played. That is huge in a close match.
Just one fans opinion...