It could have been any number of her Kansas soccer teammates who greeted freshman Raena Childers following her first collegiate goal earlier this season. But as fate would have it the first Jayhawk who congratulated the freshman midfielder happened to be the teammate she knows best — her older sister, Rylan.

Raena’s golden goal to beat Iowa in overtime back on Aug. 29 was the first of what the Childers sisters expect will be countless memories for them as sibling starting midfielders for the Jayhawks.

“I was right next to her when she did it. She kind of ran and jumped in my arms,” Rylan, a senior, recalled of her “proud big sister moment” on the field with Raena, a freshman.

The Kansas women's soccer team picked up its first Big 12 victory of the season on Thursday night, with a 2-1 home victory over the nationally ranked Baylor Bears at Rock Chalk Park.

The way Raena sees it, any time one of them scores, there’s a “wow” factor involved, because they’re teaming up at the Division I level.

That wasn’t always the plan. Though Raena committed to play for head coach Mark Francis and KU soccer when she still was a sophomore at Grain Valley High (Mo.), Rylan was already playing collegiately for Kansas City at the time.

After two seasons of starting for the Roos, Rylan decided to transfer. Before she made a choice on where to go next, she checked in with her younger sister to get a sense from Raena about the KU staff and program. After exploring her options, Rylan asked Raena if she could transfer to KU.

“Yeah, sure. Why not?” Raena remembered replying. “I’m not going to say no.”

Added Rylan: “I don’t think it really hit her that I was going to be here until I started playing here and then she got here.” 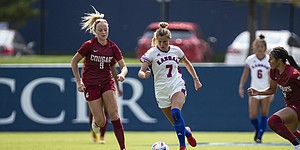 Raena Childers makes a play for Kansas soccer during a match versus Washington State on ...

This season marks Rylan’s second with the Jayhawks and Raena’s first. But it’s not their first time teaming up. The Childers duo also played one season together in high school, and prior to that were on the field together some for a competitive squad coached by their father, Brad, who still coaches for the KC Athletics club team.

Raena said this time around playing with her sister feels different, namely because they’ve leveled up to the college soccer ranks.

“Getting to play with her is helpful, because I know what it takes,” said Raena, who noted playing with Rylan fuels her to compete harder.

Francis said the starting midfielders and siblings are “super competitive” and that’s even shown during the Jayhawks’ training sessions.

“One of them will kind of clip the other or something,” Francis said with a chuckle. “It’s always kind of interesting. But it’s all good.”

Rylan said the tackles they try against each other during KU’s practices are “kind of dangerous,” but not with “bad intent.” 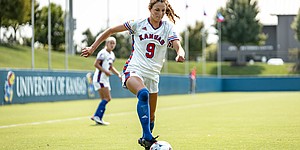 The sisters have some soccer fearlessness in common, and Rylan said their dad, who coached all seven of his children through the years, deserves credit for that. Raena said they were born into a soccer family. And on some days when they were younger, that meant showing up for a game three hours early, because their father, Brad, had two other games to coach before theirs.

“They’ve both got a lot of bite to them,” Francis said of how the Childers’ upbringing impacted them as players.

Rylan didn’t have to figure out how to navigate the dynamics of playing alongside a sibling at the college level when Raena got to KU earlier this year. Back when Rylan was a freshman at Kansas City, she teamed up with her sister Reighan, who was a senior.

“Not many people get to do that at the collegiate level, especially Division I, so that’s really awesome,” Rylan said of playing soccer with her sisters.

That experience with Reighan, Rylan said, prepared her for how to best help Raena along this year. 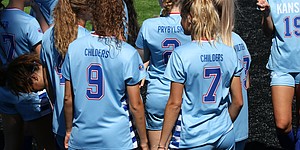 Kansas soccer teammates and sisters Rylan (No. 9) and Raena Childers (No. 7) stand side ...

Said Raena: “She holds my standards high for me, because she knows what it takes and I understand where she’s coming from.”

One of KU’s captains, Rylan not only has a special connection with her sister, she also goes way back with other Jayhawks. She estimated she has known teammates Lexy Farrington, Brie Severns and Emma Beltz since they were about 9 years old, because they were club teammates of Raena.

“When I got here I kind of felt like a little bit of a sister to quite a few girls,” Rylan said.

Francis spoke highly of the senior sister’s leadership skills, which starts with her drive.

“I think that carries over,” the coach said. “People look at what she does and go, ‘OK, she’s working that hard, I can work that hard, too.’”

Unlike when they were high school teammates, the Childers sisters will get to team up for two seasons this time, as Rylan will use the NCAA’s pandemic waiver for an extra year of eligibility. While the sisters obviously want to help the Jayhawks put together a strong finish to this season in the weeks ahead, Rylan said she is already excited for next season, as well as having the chance to train in the offseason with her sister.

“And just really enjoy each other’s presence,” Rylan said, “because a lot of people don’t get to go to college with their sister or play a sport with her.”

Raena said they can make each other and their teammates better by holding each other accountable.

“We know each other’s capabilities,” she said of their dynamic as sisters, “and if we’re not performing at our best, we’re able to tell each other like, ‘Come on, step it up.’”