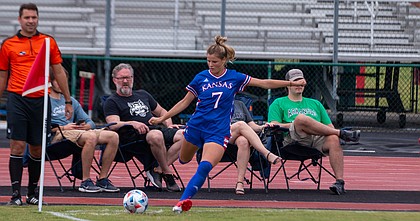 Kansas midfielder Raena Childers earned a spot on the Big 12 all-freshman team, the conference office announced Tuesday. Childers received the postseason honor after starting all 19 games for the Jayhawks during her first season in Lawrence.

She finished the year with seven points on three goals and one assist.

“Raena was very consistent in the midfield for us this season,” KU coach Mark Francis said in a news release announcing the honor. “Raena adapted very well to the college game at the top level and I look forward to watching her continue to progress over the next three years.”

Childers is the 25th player in program history to be selected to the Big 12 all-freshman team and the 12th in the last 11 seasons.

The recognition for Childers also pushed Kansas’ streak to 22 straight years with at least one Jayhawk on the all-Big 12 teams.

The rest of the team?

It would seem that soccer is more like football than basketball. In the former one player has less impact on the results.