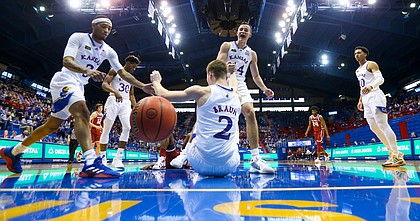 The Kansas men’s basketball program is headed to Disney World for Thanksgiving.

KU announced on Thursday that the Jayhawks are one of eight teams who will play in the 2021 ESPN Events Invitational — previously known as the Orlando Invitational — on Nov. 25-28 at HP Field House at ESPN World of Sports near Orlando.

KU played in, and won, the event in 2014, knocking off Michigan State in the championship game.

Pairings for the event have not yet been released, but the Jayhawks will be joined at the tourney by Alabama, Belmont, Dayton, Drake, Iona, Miami (Fla.) and North Texas.

The tournament will feature a bracket format with 12 games over three days. Each team will compete in one game per day regardless of results. A full bracket and schedule of games will be made available at a later date.

Travel and ticket information for the tournament will be available at a later date.

Kansas coach Bill Self will be taking a team to the event that features 10 newcomers — five transfers and five from the prep ranks, including one preferred walk-on.

While that figures to give the Jayhawks a new look for the 2021-22 season, KU also will be returning several familiar faces in 2020-21 starters Christian Braun and David McCormack, along with reserves Dajuan Harris and Mitch Lightfoot.

Fellow-starters Ochai Agbaji and Jalen Wilson, along with new commitment Remy Martin, an Arizona State transfer, are currently testing their NBA draft status and may or may not be a part of the trip. That trio has until July 7 to decide whether to stay in the draft or return to KU for the 2021-22 season.

The rest of KU's non-conference schedule is expected to be released in the near future. The Big 12 slate will be released sometime in late summer.

If we don't win this tournament, it will be a bigger upset than the Washington Generals beating the Harlem Globe Trotters by 50 points!!!! :)

Guaranteed win. Except for #8 Alabama and potentially breaking in a mostly new team that’s never played together.

It should be good to have a couple games and maybe a couple exhibitions this year before starting the normally brutal schedule. It would be good for Coach to have a chance to get everyone on the floor in a variety of combinations without worrying about a W.

Our Drake transfer may wind up playing his old team, and that may take place the first game. Hope he goes for 20+.

Rodney ... why are you even here? Surely you don't need to check in while leading Fortune 500 companies, sailing off the Amalfi Coast, climbing Everest, curing cancer, adopting foster children or whatever it is you do that makes this site so painfully mundane for you.

RJ I would try to explain the "why" to you but I am afraid it would go right over your head. :) Amalfi is nice, but Bora Bora is my go to. You got to try dinner at La Villa Mahana at least once. Go in their winter (our summer, less tourist) Also do the snorkel swim with sting rays. A private lunch on a secluded beach, western outer bank bayside, it is worth the memories. Plan a day lost both ways for travel. We always get a private hut in the bay at the Four Seasons but really any hotel on the outer bank will do.

Alabama is loaded with 5-star players and their coach is doing a great job. That early matchup would be fabulous.

Wow...if KU wasn't in the field, would anyone watch this tournament. Usually you have another marquee basketball team in the field (Alabama won't be following basketball in November).

Agree Jeff. thus my yawn post above. Alabama is going to be a test for whoever is on our team if we don't stub our toe with a L before the last game. Oats, their coach, is very good and a winner.

Y’all are yawning, meanwhile we’ll probably mess around and get smacked by Drake or Iona in the first round. 🙄