Third-seeded Kansas avoided an upset by taking control down the stretch in its 93-84 win over No. 14 seed Eastern Washington Saturday afternoon in Indiana Farmers Coliseum.

Games have a tendency to get weird during March Madness, and Kansas fans were reminded of that for the first 30 minutes of the game. The Groves brothers — Tanner and Jacob — played a big part in Eastern Washington jumping out in front, as shots from long range were falling in bunches early on.

The Jayhawks, who were shorthanded with COVID-related issues, managed to stay within striking distance for much of the game. They then took the lead on a 3-pointer from Dajuan Harris with 9:48 left to play.

DAJUAN FOR THE LEAD. pic.twitter.com/I2mB4iJVqd

Senior guard Marcus Garrett knocked down back-to-back 3-pointers that effectively put the game away down the stretch. Garrett finished with 20 points, but it was a balanced attack for the Jayhawks in their opening-round victory. 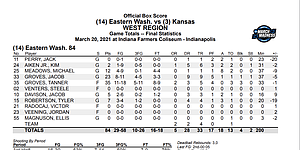 Despite playing with some fatigue from being away in quarantine, Kansas big man David McCormack finished with a team-high 22 points. Ochai Agbaji recorded 21 points, while Harris (13 points) and Christian Braun (12 points) also ended up in double figures.

Tanner Groves, who was the Big Sky MVP, poured in a game-high 35 points in the loss. Jacob Groves finished with 23 points on the day.

• Look out for Lightfoot:

One notable play from the first half was when Mitch Lightfoot attempted to lunge for a loose ball. Lightfoot knocked over a table and a laptop in the process, though Eastern Washington’s Twitter account later revealed that the laptop still worked.

Bill Self, Marcus Garrett speak to media after KU's 93-84 win over EWU by KUsports.com

Great win! Those first two always scare me. We found a way to win with offense, as our defense was not up to our typical standards. Tough game, glad to have the win and move on! All of our players stepped up!

Great job of staying together and taking control in the 2nd half. Now you see how important Jalen Wilson is to this team, without his rebounding and defense, KU couldn't impose their will as much. But honestly, winning without him and with McCormack not physically at his best should give this team confidence going forward. Everyone chipped in and that's what it takes in march when you don't have a deep bench or the most talented team.

-Great to see DMack play above expectations! Hope he can get some good rest before Monday's game.

-Good teams find a way to win, I'm proud of the team for not giving up or panicking.

-There were a lot of beards and mullets going on with EWU.

-Looks like HCBS has fully embraced the Huggins coaching uniform. Looks comfy, although the red looked too orange to me (at least on my screen).

-The poofy hair bros for EWU were very good. They truly gave it all they had. 63 teams go home disappointed in this tournament, but they should feel great about how they competed.

What a great game indeed! I'm really happy this team made it this far.
Another record breaking: 35 pts by bench!
It's a blessing in disguise. Without Jalen, we see Juan thriving. He has proved us and more importantly, himself, when he scores, we don't have to labor on offense. A lot of nice ball movement when he's in the game. I can't recall but 20 asissts seems to be the most if not 2nd best this team has played for the season. Next game, I expect more steals, too... :)

Coach BS referred him as the little guy with huge impact!!!!

DaJuan! We were +22 with DaJuan in the game. Literally filled the stat sheet. Treys, steals, a blocked shot. The offense is so much more fluid with him in. He can make a case for a 3-year starting PG role next year.

Survive And Advance. That's what March is all about. So glad we were not on the wrong end of a 3/14 upset like we were in 2005.

1] All thing considered, a really nice win and a big confidence builder for the Hawks.

2] With the play of our young guards, the possibility of Marcus leaving doesn't seem quite as daunting.

3] I believe if we play to our capability then we handle USC fairly easily.

4] That would set up match up with Iowa most likely and put the onus on Brett as to where his loyalties lie!! No fair cheering for both sides...you have to choose!

5] I feel that this season has produced a definite trend with the Hawks as a team. Bad first half/good second half, good first half/not so good second half. If they ever put two halve at near 100%, they'll beat anyone in the country.

Brett doesn't cheer for Iowa; I do - and only for football. If Kansas and Iowa meet in the Sweet 16, no question, I'll be cheering for Kansas.

Great game ! The key to the second half was Napoleon Dynamite only scored 7 points after a 16 point first half . Harris was great and finally decided to score and thats a plus .
Southern Cal next up