Lawmakers agree NCAA needs NIL help, but how much and when? 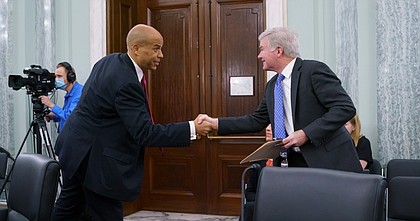 A federal law governing how college athletes can earn money off their fame and celebrity seems certain to pass — at some point.

There is no real debate among lawmakers on Capitol Hill about whether athletes should be permitted to monetize their name, image and likeness.

“There is broad consensus that Congress should pass a law that grants athletes NIL rights," Sen. Roger Wicker (R-Miss.) said Wednesday during a hearing held by the Senate Commerce Committee.

But less than a month before NIL laws go into effect in several states, NCAA President Mark Emmert was back in Washington renewing his plea for help from Congress — help that is unlikely to come as soon as the NCAA would like.

For some lawmakers, federal regulation of college sports should not end with NIL and the time is right to tackle other issues — from long-term health care and educational opportunities for athletes to more uniform and enforceable safety standards.

"To race to just an NIL bill and not address these injustices is tragic,” Sen. Cory Booker (D-N.J.), a former Stanford football player, said before Emmert and five other witnesses testified before the committee.

Wicker wants to take a different approach, calling for a “more focused bill on a faster timeline.”

Emmert said the NCAA plans to act on its proposed NIL legislation soon.

“Preferably by the end of the month,” Emmert said.

The Division I Council meets June 22-23 and could take action then, but only a federal law can preempt state laws in Florida, Alabama, Georgia, Mississippi and New Mexico that are set to go into effect July 1.

Earlier Wednesday, Connecticut became the 19th state to pass NIL legislation. Sen. Richard Blumenthal (D-Conn.), who has sponsored with Booker the sweeping College Athlete Bill of Rights, said he would block any federal NIL bill that is less permissive than Connecticut's.

“We need to listen to the athletes,” Blumenthal said. "They are the ones who are all too frequently outnumbered in this conversation.”

There were no athletes among the witnesses who testified at the fifth NIL-related hearing in Congress over the past year, but chairwoman Sen. Maria Cantwell (D-Wash.) said there was a plan to hear from a panel of athletes in the future.

College sports leaders have warned a patchwork of state laws will make it impossible for schools that compete against each other to do so on a level playing field.

“The impact would be enormous," Gonzaga men's basketball coach Mark Few told the committee. “You’d be at a huge competitive disadvantage, both when student-athletes are coming out of high school and when they have the opportunity to transfer.”

Sen. Marsha Blackburn (R-Tenn.) scolded Emmert and the NCAA for not taking care of the NIL issue sooner.

“This is why the states have taken it upon themselves to do what the NCAA has proven incapable of doing,” said Blackburn, who also took direct aim at Emmert. “Don’t you think it is time to call your leadership of the organization into question?”

Emmert said that was a question for the university leaders who sit on the NCAA Board of Governors. The board approved a contract extension for Emmert in April.

Emmert reiterated the NCAA wants a national NIL law that would preempt state laws, keep college athletes from being employees of their schools and provide limited antitrust protection from future litigation.

The NCAA's NIL proposal would place so-called guardrails around deals athletes could make to protect against third-party payments being used as recruiting inducements or pay-for-play.

Most of the state laws that have been passed also place some limitations on the types of NIL deals athletes can do.

“Players have been treated like second-class citizens,” he said.

Sen. Ben Ray Lujan (D-N.M.) ended the hearing by asking each of the panelists if they thought college athletes should be able to profit from their names, images and likenesses.

After each answered, yes, Lujan asked: “So why is this taking so long?”

Sen. Chris Murphy (D-Conn.), who did not participate in the hearing, is one of the most vocal critics of the NCAA in Washington. He agrees with Booker that college sports needs broad reform, not just an NIL law. Murphy and Rep. Lori Trahan (D-Mass.) recently introduced a bill that if passed would allow college athletes to organize and collectively.

Murphy said complicating this issue in Congress is overlapping jurisdiction. The judiciary and education committees can also weigh in. He said a solution is not coming as quickly as the NCAA would like.

“I can make an educated guess that there is no way something’s passing by August,” said Murphy, who has put forth one of six NIL-related bills that have been introduced in the House and Senate since December.

“The NCAA’s argument is that the sky's going to fall if all these state laws become operative,” Murphy said. “Why not test that theory? Why not let these state laws come on the books and see if the result is a nasty, hard-to-manage competitive imbalance?”

Florida-based attorney Darren Heitner helped lawmakers in that state craft an NIL bill. He said he has read every state bill that has already passed and sees them as largely similar. He also doesn't believe schools operating under different NIL rules will be nearly as disruptive as some college sports leaders have portrayed — as long as the NCAA itself puts its own rules in place soon.

Who really benefits from this would be players like Perry or Frank. Four year guys, and fan favorites but not necessarily great pro prospects. Imagine if Todd Reesing could have had access to some of thes opportunities?

The Government and NCAA working together? Look for changes in 3023.

The others who really benefit are the have programs vs. the havenots. Not terribly different than the transfer rules. Leads to greater and greater disparity.

Amazing that a politician suggests a “do nothing” response {sarcasm}. Let’s do nothing and see how bad it gets to justify a knee jerk reaction. The kids can be our guinea pigs.

What’s the o/u on the number of committees needed to “solve” the issue?

I’m glad that Booker is on the case. But should t the guys at the NCAA have been on this a long, long time ago?

$$$ Fixes EVERYTHING!!!
So the starting QB can make great $$$ off of his name, then the 3rd string long snapper makes how much? I see NO problem with a locker room divided, earlier in the comments section of these comments it was said, top guys will earn money and those 2nd Terr guys??? WELL, everyone for themselves, GREAT job of teaching TEAMWORK...

See how well that keeps a locker room together!!!

Should B a train wreck waiting to HAPPEN!!!

Welcome to the real world. The haves and the have nots. The popular and the not popular, the rich and the poor, the successful and the unsuccessful. This is no different than anything else. Those who are the best at their particular skill have the opportunity to make more money. If you're a really good Lawyer you can charge more, if you're a really good painter you get paid more for your work. If you're a great mechanic you get more work than the guy down the road who sucks at his job.

What you're describing is the "everyone gets a trophy" mentality that so many say is problematic.

Ignorance reigns. Let the bidding begin. We are witnessing the death of amateur athletics and inviting high level corruption.

Color me ignorant and a non-law expert...at least outside of tax laws as I'm a CPA...but why is legislation needed in this? Federal or state? Isn't the issue NCAA rules on amateur status and eligibility? Are there existing laws preventing student athletes from earning money on their name and likeness or otherwise? Any existing laws that need correcting? Laws, not NCAA rules. If the problem is NCAA rules, then the NCAA needs to step up and address the issue and leave the legislatures out of the process! Bringing in politicians will just create further messes and delays.

The NCAA isn't willing to make this decision, at least not before the state level NIL come into effect soon, so they asked the Government to step in and do the work for them.

Basically, the NCAA is chicken5h1t.