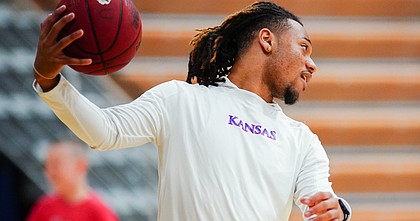 Topeka — Kansas freshman point guard Bobby Pettiford is itching to get on the court with his teammates, and he will be one step closer to doing just that starting on Monday.

Pettiford, who has been sidelined with an injured left foot since May, told the Journal-World that he will be able to participate in half-court situations next week. He has yet to be cleared to scrimmage, but expects to do everything but that when he returns to action.

“I’m actually recovering way faster than what they thought,” Pettiford said during Brett Ballard's basketball camp at Washburn University on Thursday. “I’ll be back Monday.”

The young point guard from Durham, N.C., said he originally hurt the foot during a pickup game at Life Time, in nearby Raleigh. Pettiford said he had three torn ligaments, though the worst part was the bone bruising. Pettiford got the injury treated at Duke Medical Center.

When Pettiford arrived in Lawrence in early June, he estimated that his left was about 40% to 50% healthy. As of Thursday, he put that number at about 70%.

Over the last month, Pettiford has been careful during the rehab process. He has been doing catch-and-shoot drills on the court, and also spent a bulk of his time lifting weights, doing small jumps and rehabbing in the pool.

“I’m just kind of chilling now,” Pettiford said. “I do two rehabs a day, maybe one shooting workout and a lot of pool workouts. Next Monday, I’ll start getting back into a groove.”

The 6-foot-1, 175-pound guard has yet to really reveal his talents on the basketball court this summer, though his reputation speaks for itself.

While at South Granville High School, Pettiford was part of two conference championships, two conference tournament titles, won conference player of the year awards and played in a school-record 79 wins. In addition, he is the school’s all-time leader in scoring (1,944 points), assists (615) and steals (288).

Still, Pettiford understands how important the offseason can be in terms of preparing him for his first collegiate campaign.

“(I) just want to learn how to run the offense,” Pettiford said. “Learn I got to guard when I come in. Things like that. Learn how to be a leader, even though most guys are four or five or even six years older, I still got to learn to be able to push those guys the same way that they push me.”

Pettiford’s return will certainly help a brand-new team become more familiar with each other. Pettiford is one of 10 new faces added to the program in the offseason, a group that features eight scholarship players and two walk-ons.

“We have (10) new guys, so when it comes Monday it is definitely important that we are all clicking and working together,” Pettiford said. “I’m definitely tired of watching.”