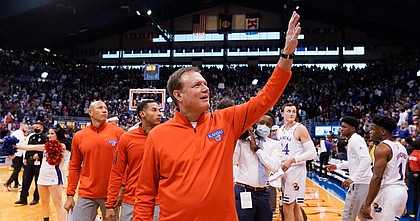 Facing an opportunity to watch Kansas basketball in person for ticket prices as cheap as they’ve been since his arrival in 2003, Kansas coach Bill Self expressed confidence in KU fans’ ability to show up for Saturday’s newly scheduled game against George Mason at Allen Fieldhouse.

Shortly after the sixth-ranked Jayhawks clobbered Nevada, 88-61 on Wednesday night, Self was asked if he was worried about the Jayhawks’ 324-game consecutive sellout streak, given the late addition to the Jayhawks’ schedule.

On top of having a little more than 48 hours to sell tickets for the George Mason game, Saturday is New Year’s Day and the weather forecast is calling for extremely cold temperatures and winter weather.

Official records show that every home game in Self’s 19 seasons at Kansas has been a sellout. 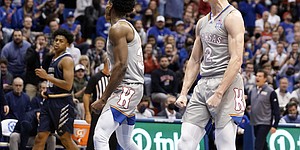 View a gallery from Wednesday night's game between the Kansas Jayhawks and Nevada Wolfpack at Allen Fieldhouse.

After acknowledging that the KU marketing team could get creative with wording and asterisks to keep the streak alive if the building is not full on Saturday, Self categorized all of the obstacles as “excuses” and said his expectation was for Allen Fieldhouse to be full and rocking again this weekend.

“There could be crappy weather. It will be cold. That’s just another excuse,” Self said, noting that ticket prices for the GMU game range from $15-$25. “The best fans in America have to deliver when they’re called. I think our fans would expect us to play well on Saturday regardless if it’s cold or not or regardless if it’s a cancellation (game). So we expect our fans to purchase and we expect them to be here. Because that’s what the best does.”

In years past, KU’s sellout streak has lived on even if the building was not been completely full because of season-ticket packages. Bad weather has impacted attendance at a handful of games during that time, but the games still went down as sellouts because the tickets were sold. But with the George Mason game being a late addition and, therefore, not part of the season ticket package, it will be up to Kansas fans near and far to purchase all 16,300 tickets to keep the streak alive.

KU donors were given the first opportunity to purchase tickets, beginning at 1 p.m. on Wednesday. Tickets for the general public went on sale beginning at noon on Thursday through the KU ticket office. 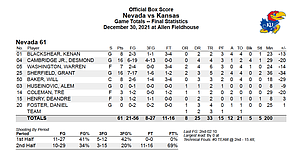 In addition to the relief of simply getting a game scheduled to replace what was supposed to be the Big 12 opener against TCU, Self said he was looking forward to the chance to welcome George Mason coach Kim English back to Allen Fieldhouse, as well.

Now in his first season with the Patriots, English played his college basketball at Missouri and, in 2012, was a part of what Self has called the best game at Allen Fieldhouse in his time with the Jayhawks.

“I’m sure Kim will have his guys juiced, jacked and ready to go, in large part because it means something extra to him,” Self said. “You know, even though he coaches at George Mason, he’s a Tiger playing Kansas. And so that should make it more fun also.”

Bill Self breaks down KU’s win over Nevada by KUsports.com

KU players react to 88-61 win over Nevada by KUsports.com

There was a real simple solution to that, just add it to the season ticket packages. Pretty much everybody sitting around me last night had no idea they had to go purchase tickets, and were pissed when they learned they had to, all season ticket holders. Can't imagine how many (especially the 70+ crowd) season ticket holders are going to show up tomorrow and think they have their parking and ticket and be really mad when they don't get in...not a fun day to be a ticket taker! Just was on hold for an hour trying to get through to the ticket office to ask when purchased tickets were going to show up in accounts, finally gave up. Can't be much fun in there today either.

In reply to Michael's comments, 1) I am a season ticket holder (not quite 70+) and was not aware that I had to buy tickets until I was sitting at the Nevada game (purchased while at the game using my smart phone). What I found was that most of the tier 1 tickets had not been purchased so I improved my seating - from tier 2 to tier 1). Therefore, it is possible that many of the season ticket holders might not be happy losing their normal seats and decide not to attend. Regarding the second point - "can't be as much fun" in Allen Fieldhouse. I will say for the second straight game the capacity crowd was dead (excluding the final minute of the first half). Without a large student contingency, Allen Fieldhouse is far from the loudest indoor stadium and lacks intimidation. The students are the life of Allen Fieldhouse! I have a feeling that Saturday's crowd will be the worst of the season. So those new to Allen Fieldhouse be loud and proud and the band and cheer/yell leaders need to keep the crowd engaged. Rock Chalk.

Every time Self speaks, it just seems like an overbearing boar who is genuinely entertained by his own voice and wisdom. It’s now our responsibility to balance the books for you? Here’s a thought, take $100,000 of the roughly $5 million you make annually, buy tickets and give them away. At $25 a ticket, that’s 4,000 seats right there. I’m sure we can take care of the rest.

(narcissist) — Personality trait or behavior of someone who has no empathy for people, constantly berating, blames others for their problems, selfish and controlling, and really horrific to be around. Some may find them initially interesting and gregarious when you first meet them, but eventually you realize that they only talk about their personal feelings or observations or most troubling 'themselves'. Trouble holding a job due to problems working with authority figures. Have relationship problems for the obvious reasons, express feelings of what others should do or live up to being, while believing it's all another person's fault or responsibility.

I like that Sae - - McCoob - -fits well. Holy crap some people post just to read their own garbage.- -Cut McCoob a little slack though he is just a little soft that's all, takes some time for his light to come on , but he will be all right. - Great Post Sae

Its still Christmas right? I mean it goes on as long as Sae says it goes on.

Oh Sae, just to catch you up on Denmark -

Danish Prime Minister Mette Fredricksen said that cases were "very, very high" and that she had "no doubt that new measures will be needed to break the chains of infection." In just the last 4 days, there have been 88,000 new cases. They did not have any 7 day period with more than 10,000 in over year. Deaths are rising as well. Current data still list Variant D as the main strain there, but they expect Omicron to be the main variant as more new cases are processed. Most flights are grounded. Deaths have risen as well.

Thought it best to keep you up to date. Since it is still surging there.

This information posted by the SSI yesterday, their agency who is doing the reporting. Its 7pm on 12.31.21 as I post this.

Pooh. This is a great opportunity for non-ticket holders to see a game that's normally sold out. I'm also sure it wasn't Self's decision. A good decision, I'd say.

He was only a Jayhawk for a short while my prayers for Gethro Muscadin who was in a serious accident inTopeka and has life threatening injuries ,earlier this year Tyon Grant-Foster was rushed to the hospital at halftime of his first game with Depaul and has missed extended time with Depaul as well . Hopefully both with make full recoveries

Thanks for the note Mallory. I read earlier about Gethro but hadn’t heard about TGF.

In a more positive former player news, saw last week that Ryan Willis was on the practice squad for the Chicago Bears, and due to various health problems was possibly even the backup for the game though I think they have more experienced QBs available again.

A few years after I graduated, I was traveling from CO to Chicago and planning to stay with friends in Larryville for the weekend. Left the front range as a storm was rolling in and raced it across KS.

The next day, everything was snowed in, so many season ticket holder’s weren’t going to be able to travel to the game. In order to have a crowd, KU turned it into a fundraiser for the local food bank or something like that. What a treat. Always great to get back to the Phog. Not sure if that was during the 300+.

Isn’t the reason this game isn’t part of the season ticket package because it’s the replacement for the CU game?

Geo Mason was scheduled to replace the postponed home opener with TCU (see first George Mason article on this site). So KU is probably looking to reschedule the TCU game, giving season ticket holders that game back. So G. Mason turns out to be an extra home game, and a cheap one at that.