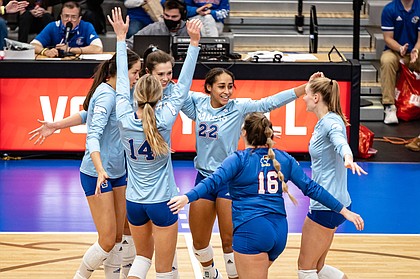 Former Kansas volleyball player Caroline Crawford is headed to Wisconsin, according to a recent report from the Wisconsin State Journal.

Less than a week after informing the Kansas coaching staff of her decision to enter the transfer portal, the 6-foot-3 middle blocker from nearby Lansing landed with the reigning national champions.

Wisconsin knocked off Nebraska in five sets in last weekend’s national championship match in Columbus, Ohio, to claim its first ever national title in volleyball.

The report called Crawford “a significant addition” to the Badgers’ roster, but also noted that the now-former Jayhawk “will provide depth in the middle for the Badgers.”

She averaged 2.25 kills and 0.81 blocks per set during her sophomore season, which ended with Kansas reaching the Sweet 16 for just the third time in program history.

Despite Crawford’s departure, the Jayhawks will take some serious momentum into the offseason and figure to open the 2022 season with sky-high expectations.

Ray Bechard’s team will return a young core of elite talent that played a huge role in this year’s run. And the Jayhawks added four players in the early signing period that all have the potential to contribute immediately. Beyond that, KU, like most programs, also figures to take a peek at the transfer portal to see what options exist for adding strength and depth to the roster.

Kansas (18-12) finished the season ranked No. 19 in the final American Volleyball Coaches Association Coaches Poll. KU was one of two previously unranked teams to make it into the final rankings, joining No. 16 Illinois, which also advanced to the Sweet 16 as an unseeded team.

The Big 12 was well represented in the final rankings, as Kansas was joined by No. 5 Texas and No. 10 Baylor in the final AVCA poll of 2021.

This explains a lot, but it still doesn't answer the question of why go to be a benchwarmer, potentially, when she should b e an even bigger presence at KU.

Also, is she that duplicious that she said all the good things about KU knowing she was going to Wisconsin, or did something happen at the tournament or immediately afterward that affected her enough to lead to her decision.

Again in the context of good players transferring, questions must be asked and answered.

Not sure what happened here........ All I know is that game experience trumps everything and she's going to get less of it there. This doesn't speak well for our program as far as optics go. Maybe she just felt like the coaching would be better there or something. Nobody will ever know. They will say all the right things and act like it was mutual........ we all know better. Either way, we roll with the ones who are here RCJH!!

I wouldn’t be so dubious about her playing opps. Wiscy won the nc on the strength of 4 super seniors, and their 5 time all-American, Rettke. CC is a elite player that could be a significant contributor.

We use to hear a lot about facilities for football programs and somewhat for basketball programs but very little for the nonrevenue sports, though we do now have a world class track. I seem to recall a previous time we were a top VB seed in the tourney we weren’t allowed to host the rounds that normally are hosted by top seeded teams because our facilities were deficient. I wonder how much facilities and other resources played into CCs decision.

Dirk, I'm not sure but I am assuming that since we built a new volleyball arena in the last 18 months that we made it big enough to qualify for hosting NCAA tourney games.

As predicted in a prior posting. The college transfer portal, i.e., free agency, has created challenges for most head coaches who are not at a top program. Maybe Wisconsin has a benefactor who is providing NIL to the players on their national championship team. College athletics is officially over. Colleges now have semi-pro teams with open free agency and without a salary cap.

Big fish eat little fish. This is why we have Remy Martin.

It makes me wonder if she's getting NIL money in Wisconsin and not here.

I agree with Andy that there's going to be benefactors all over the country who can pay kids to end up at the schools they choose.

That said, this HAD to be in the works well before recently. I'll be curious if anyone ever finds anything out about it.

Thanks Bville. I recall the new arena and it being built to ncaa standards, but the old arena was just an example and one component of the program.

I think Wiscy’s freshmen MB started alongside Rettke, their SSr.

I agree with Bville's original statement that the asst ad should find out from Crawford, what exactly is happening. No punishment, just the facts.

In some ways it seems like we are starting over again, which we seem to be doing every year.
Langs coming back helps, but make no mistake Crawford will be missed. Crawford was the ionside threat that made a lot of Caroline Biem's success possible.

Again, this has happened at least 4 times over the past 5 years. It's not jiust one player.
And its hard to have a good program with that kind of turnover.

Layne is exactly right in that we will be starting over again. Again. Crawford was a genuine inside threat besides being a great blocker. Langs is a good blocker but does not jump well enough or quick enough to hit off a middle set, she is only effective on the curl.

Crawford is a Kansas girl whose dad ran track at KU. It would be nice to hear her reason for leaving. Maybe the intrepid journalists at the LJW (or UDK) could get her to sit down for an interview?

Well,
All we have to do is find a 6-3 all american with great blocking and jumping ability, who wants to come to Kansas. Her name doesn't even have to be Dorothy.

Oh and ps Glen, they probably will offer no explanation at all. That is what happened with all the other players. Do you know why Cameron Ennis left? Or any of the other starters who left?