Transfer portal a source of depth and experience for KU football

When head coach Lance Leipold and his staff took over the Kansas football program this past May, they knew recruiting for the 2022 class would be slow-going at first, given the timing of the transition and only a handful of months left before the early signing period arrived.

It didn’t take long for them to adapt and embrace the possibilities that the NCAA’s transfer portal had to offer.

Especially once the 2021 season began, Leipold said, and the coaches were able to better evaluate areas of need within the roster, KU’s interest and involvement with players who had their names in the portal began to pick up.

“What today's transfer portal and other things are doing,” Leipold said, “is people can recruit for depth and get more experience within that two deep that gets handed to you every week. And stay as an older, veteran football team.” 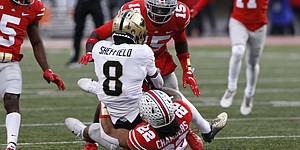 By the time December’s early signing period arrived this week, KU had invested enough man hours into recruiting the portal to bring back one of the best transfer hauls in the country. As of Friday, the Jayhawks ranked No. 5 nationally in 247 Sports’ new transfer portal rankings for the 2022 class. The only programs ahead of KU are No. 1 South Florida, No. 2 Michigan State, No. 3 Indiana and No. 4 Louisville.

Transfers from four-year programs don’t sign national letters of intent the way high school and junior college players do, so Leipold didn’t discuss any of the transfers during his early signing period press conference on Wednesday. Transfers coming out of the portal sign athletic grand-in-aid documents when they arrive on campus. KU’s incoming transfers are expected to do that and become official members of the team in January, with the start of the 2022 spring semester.

“This is a different way of college football than when I stood in front of you on May 3 and talked about recruiting,” Leipold said this week, referencing his introductory press conference a little more than seven months earlier. “It is vastly changed. And we have to be able to adapt in many different ways with it.” 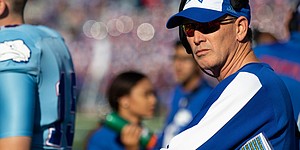 This past season, KU had 68 players on its roster who were in their first or second years, making the Jayhawks the fourth-youngest college football team in the country and the youngest among Power Five programs.

As a result, Leipold and his staff didn’t want to exclusively add high school players to that mix with the 2022 recruiting class. That was one of the factors in KU signing just six new scholarship players in December.

Speaking generally about the benefits of finding impactful players in the portal for next season, Leipold said he always tries to be cautious with expectations for incoming recruits, especially before they arrive on campus.

“But from what we expect, what we want them to do, yeah, I'm excited about where where we're heading, just like I've always been. And hopefully I can be more specific in a month or so,” Leipold said, referencing the expected arrivals of KU’s transfers.

All five of the transfers who have committed to the Jayhawks so far will have at least two years of eligibility remaining when they get to Lawrence.

In Leipold’s opinion, players in the portal, depending on how long they’ve been in college, tend to be more mature when it comes to figuring out where they want to play football next. He said many times those players have different criteria than a high school recruit for making a decision on their landing spot.

“It's not always the biggest stadium and the most uniform combinations and what kind of photoshoot they get,” Leipold said. “It's more about, I guess I’d use the word substance. Where do I fit in? Who am I fitting in with? What's it more about? And is it going to help me get to my next goal?”

Added Leipold: “I think the substance and genuineness and thoroughness and the integrity part, I think we'll be able to hold up just well with that. And I'm excited about that part.”

“ This past season, KU had 68 players on its roster who were in their first or second years, making the Jayhawks the fourth-youngest college football team in the country and the youngest among Power Five programs.”

This suggests to me that in a couple of years, with the young men listening to Coach Lance , and the OC and DC, that they will be excellent football players, and will be challenging all opposing teams.

I’m not sure about all of the teams ranked ahead of us in 24/7’s portal rankings but IU floundered badly this year after a really successful bowl season last year and a bunch of players jumped ship. They would have needed to hit the portal hard just to replace the bleeding.

Benton - Thanks for clarifying the signing process for transfers.

I think it was a Phog article I read that said Young was really fast; like 10.6 hundred meter fast. I think it was the same article that talked really positively about a lot of the recruits and roster situations. Eriq fits as a run-stopper. Bostick should be back as a SSr, but there are quality players to develop at OT for the future and some might be even better sliding into the middle. (Doesn’t this staff require OL learn multiple positions?) The Kansas safety (strong) had a knee injury as a junior that hurt his recruiting but he has shown he’s fully recovered. The other safety is Omar (or has he made OJ weight?) size, but with the same great ballhawking skills. Nice combo. Also really high on QB Vasko. Not polished like a 4* or 5*, but excellent raw material.

How quickly the rebuilding process has changed, yet again, given the changing landscape of college athletics. When Les Miles was hired, he was praised for re-building the program from the bottom up with only high school recruits (i.e., "making the Jayhawks the fourth-youngest college football team in the country and the youngest among Power Five programs"). The plan was to start winning in years 4 and 5 with juniors and redshirt seniors recruited by Miles. Whereas David Beaty was criticized for trying to win quickly by going the junior college route to find the more "mature" players. Now with college free agency via the transfer portal the philosophy has changed yet again. Instead of looking for overlooked players in the junior college ranks, coaches can recruit seasoned players who feel unappreciated by their respective teams from established FBC and FCS programs. A new era that will hopefully benefit KU. But I see a potential major challenge, i.e., Leipold will need to re-recruit constantly to avoid losing his best players to more established programs looking to develop depth. Time will tell, but there is confidence the right person is in charge. Rock Chalk.

Dabo Swinney is right. The portal is a disaster. Players should be required to sit out a year.
Give the year back, if they graduate.

A lot of very good players in KANSAS.......go get them and particularly IN THE KANSAS CITY AREA