A hot start proved to be brief and ultimately unsustainable Thursday for a Kansas volleyball team trying to upset the NCAA Tournament’s No. 3 overall seed, Pitt, on the road.

The Panthers recovered quickly from a first-set deficit to sweep the Jayhawks, 25-19, 25-21, 25-18, at Fitzgerald Field House, in Pittsburgh.

“We jumped on them pretty good in the first set, but you didn't see a lot of panic or anxiety on their side,” KU head coach Ray Bechard said of Pitt’s resolve during his team’s postgame press conference.

KU (18-12) opened the regional semifinal on fire, taking an 8-3 lead that prompted Pitt coach Dan Fisher to call a timeout. A Panthers resurgence would follow, and Pitt evened the first set at 11, on consecutive aces by Panthers star Kayla Lund. Bechard called a timeout in response, after KU made three errors during Pitt’s run. 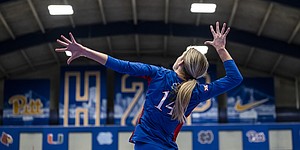 Caroline Bien rises up to take a swing for Kansas volleyball during the Jayhawks' Sweet ...

Even so, the Panthers kept the momentum after the stoppage, rattling off six consecutive points. The Jayhawks couldn’t find a way to slow the wave of Pitt scoring opportunities, and the Panthers (29-3) took control with a 10-0 run that put KU behind, 17-11, before the Jayhawks finally scored on a Rachel Langs kill.

“They played steady, served extremely well,” Bechard said of Pitt, which moved on to its second regional final in a row. “Probably one of the better serving teams we've seen this year. And though we attacked well, we just couldn’t slow them down enough.”

KU’s defense at times kept the underdogs in the hunt against a strong Pitt offense, but the Panthers finished with a .356 hitting percentage. Chinaza Ndee put away 14 kills for the Panthers and Leketor Member-Meneh had 11 more.

Langs led the Jayhawks with six blocks and Anezka Szabo finished with five.

The second set was tied at 8, before the Panthers began to create separation, often with Serena Gray coming through with kills at the middle of the net, as KU fell behind, 17-13.

Following a timeout by Bechard, the Jayhawks steadily worked their way back into contention, even after trailing 22-16. It was at that juncture that they scored four in a row — with kills by Caroline Crawford, Jenny Mosser and Szabo, and an Audri Suter ace.

After cutting Pitt’s margin to 22-20, the Panthers took the second set, scoring three of the next four points, with two of those coming on KU errors.

“They run a really fast offense, so it's not something we're used to. The fastest we played against has been Oregon. We don’t really see that in our league,” Crawford said.

“On top of that, they were in system a lot, which is really hard in the middle,” Crawford added, explaining the Panthers’ attack often set up one-on-one matchups on the outside that are difficult to defend.

Bechard said Pitt’s 6-2 attack — whichever player is in the back row serves as the setter — isn’t something KU saw a lot of in the Big 12 this year.

“They have physicality in different places, so they could kind of get matchups that they wanted, because they had good arms on the right side, good arms in the middle, good arms on the left. So that offensive balance, I think, was pretty complete,” the coach said.

Down 15-11 midway through the third set, the Jayhawks soon found themselves in greater danger, as Pitt’s lead grew to 20-12. But that’s when the Jayhawks scored four in a row, with the help of a kill apiece from freshmen Camryn Turner (five kills, 19 assists) and Caroline Bien (seven kills).

However, a timeout by Pitt helped one of the favorites in this year’s field regroup and win five of the next seven points to move on to the Elite Eight, and a Saturday regional final matchup with No. 6 Purdue.

The Jayhawks, who helped the program reach the Sweet 16 for just the third time, hoped to also secure KU’s second ever Elite Eight berth. Instead, their season and a six-match winning streak came to an end.

Super-senior Mosser described the post-match mood as “a bummer.”

“There's always plays where you wish you could have done better. But I think the biggest thing is, like Coach B has talked about, just gratitude. No one really had us making it this far. Most people had us out in the first round,” Mosser said, adding the players feel appreciation for what they just accomplished.

Likewise, Bechard said he “couldn’t be happier” for the season that the 2021 team gave KU’s fan base, coaching staff and athletic department.

“I think this group showed that this is a program that can compete with anybody in the country,” Bechard said, “and we'll continue to do that in the future.”

Competed all the way. Pitt just had too much. Congratulations, Jayhawks, for an excellent showing in the tournament. The future looks bright.

CONGRATS Ladies and THANK YOU for a great and fun season........nice prep for next year!!!
RCJ GKU

A good run had to come to an end, very proud of this group.

We committed 15 total service errors/service return errors, so that's 5 points given away each set. Pitt committed a total of 8. If those numbers were reversed we might have put some pressure on them.