Kansas City, Mo. — No matter what goes right, what goes wrong or how any of it looks, the eighth-ranked Kansas basketball program seems to know it’s in good hands when Ochai Agbaji and Christian Braun are on the floor.

That was the case again on Tuesday night at T-Mobile Center, where Agbaji and Braun combined to score 43 points on 18 of 25 shooting and Kansas bludgeoned visiting UTEP 78-52.

“Obviously, those two carried us tonight,” Kansas coach Bill Self said after the Jayhawks’ seventh win of the season.

The two veterans who have emerged early as what Self calls this team’s “go-to scorers,” routinely have been the first Jayhawks to score and often have found ways to help each other do just that.

Tuesday’s first few minutes were filled with examples of both, as Agbaji and Braun combined to score 14 of the Jayhawks’ first 18 points, using everything in their bag of tricks to make it happen. 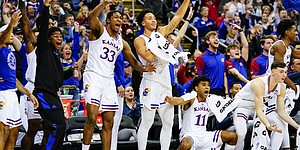 View a gallery of images from Tuesday night's game between the Jayhawks and Miners at T-Mobile Center in Kansas City.

Defense led to offense. Both players played above the rim. And the two Jayhawks and two of the top three scorers in the Big 12 Conference thus far helped Kansas (7-1) race out to an 18-5 lead that quickly erased whatever hopes UTEP had of competing in this one.

Agbaji’s 23 points gave him the upper-hand in the scoring column, knocking in one more 3-pointer and two more free throws than Braun. But he made sure to point out after the victory that there is no competition between them to outdo each other, only a burning desire to do everything possible to outdo the opponent.

On Tuesday, the two did it together, almost matching one another, shot for shot, as the game went along. But Braun was more than happy to give most of the credit for that to Agbaji, who topped the 20-point mark for the sixth time in eight games this season.

“That’s Ochai,” Braun said. “We don’t need to be surprised anymore or think it’s some little run he’s on. That’s Ochai. That’s who he is. That’s what he worked to be and I’m happy to see it.”

It’s clear that Abgaji’s success helps the team’s bottom line. But Braun said the senior guard’s attacking mentality and ability to force defenses to key on him has created chances for others, as well.

“I’ve just kind of been feeding off of him,” Braun said. “He’s done a really good job of opening things up for others to go score.”

To this point, Braun has done the best job of consistently taking advantage of that. 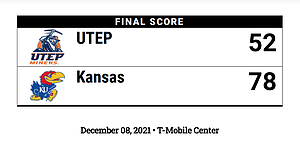 “He’s following my lead in the sense of all the work he put in in the offseason,” Agbaji said of Braun’s emergence. “I saw it; I was there working out with him from time to time, and we’re just trusting that and going off each other’s confidence.”

Self’s trust in his top two players — and having at least one of them in the game at seemingly all times — runs so deep that he subbed Agbaji in for Braun with just over six minutes to play and Kansas leading by 21 points.

“Those two are playing at a pretty high level,” Self said.

But he also noted that both players still turned down a few too many shots, cut into KU’s ball movement and didn’t get to the free throw line enough.

“We’re a fun team to watch when the ball moves,” Self said. “And the ball was sticking tonight. It was disappointing to me.”

Beyond the specific impact of Agbaji and Braun on Tuesday, it was hard to tell which element was more responsible for KU’s fast start, the offense or the defense.

Kansas held UTEP without a point for the first 6:38 of Tuesday’s game, forcing seven misses before the Miners’ first make and coercing UTEP into five turnovers, three of which came via steals by Dajuan Harris Jr. Harris later tied his career-high with four steals.

Offensively, the Jayhawks raced out to leads of 10-0 and 18-5 on the strength of 67% shooting from the floor. Braun (8), Agbaji (6) and David McCormack (4) accounted for KU’s first 18 points, with eight of them coming off of dunks.

Self and several of his players seemed to think it was the defense that led the way.

“Our offense tonight was poor, without question,” said Self of his team, which turned it over 16 times. “But it looked like we played good offense because we scored so many points off our defense the first half.”

If there was a single play that summed up Tuesday’s game, it came midway through the first half, after the Jayhawks threw the ball away on offense trying to find a cutter to the rim.

UTEP’s Jamal Bienemy came away with the steal and started up the court. But before he could get out of the starting blocks, he collided with teammate Jamari Sibley and lost the ball. It bounced right into the waiting hands of Jalen Wilson, who quickly flipped it to a wide-open Agbaji under the rim for an uncontested, two-handed slam.

Things went so well for Kansas in the first 15 minutes that Agbaji’s dunk at the 5:28 mark moved him to 13 points for the night — the same total that UTEP’s entire team had at that point.

The Jayhawks leveled off a little late in the half, but they still held UTEP to 30% shooting from the floor, compared to 59% for Kansas.

Had it not been for a sloppy final five minutes, which saw their first-half turnover total balloon from five to 10, the Jayhawks might have been up by close to 30 at the break.

All of it was a necessary step — and a difficult one, at that — to get to the next game on the Jayhawks’ schedule — 2:15 p.m. Saturday at home against Missouri.

That game will be the first meeting between the two bitter rivals since 2012, and the Jayhawks talked about trying not to look past Tuesday’s game while anticipating the return of the series with their border rivals.

“This is the best game on our schedule,” Self said of KU’s upcoming clash with Mizzou. “I didn’t think (UTEP) was a trap game, but Monday morning there was well over 100 camping groups (at Allen Fieldhouse) already, which means over 2,000 students are already waiting there since Monday morning to go to the game, and that number will go to 150-200. We were telling them how important this game was and they’re thinking about what’s getting ready to happen on Saturday.

“I think they handled it OK. But they’re excited for Saturday.”

KU-UTEP postgame: Bill Self by KUsports.com

nice win Jayhawks, looking good. maybe a few too many TO's, but still a nice win.

It was so enjoyable watching the Jayhawks fit the Miners for clown suits, especially in the first half. The funniest play of the night was when two UTEP players ran into each other trying to rebound the ball, and Ochai got the ball and slammed it home. I don't know if SportsCenter is still doing the Not Top 10, but that should be on there. Great to get a laugh at UTEP's expense.

Coach has some nice game film on turnovers to go over at least.

Remy is still losing his man when on defense. That is going to cost us against better teams. Zero points on 7 shots in 23 minutes.

At least Wilson is rebounding.

Hard to to take away much from a quiet night from some of the rotation.

Observations from this fun game to watch against inferior competition:

1) Agbaji and Braun are the men. Great efficiency.

2) McCormick better. Still some misses below that I think he can learn from.

3) Remy and Harris, way to hustle.

5) FT% up to average. Big improvement. UTEP 91%. Would love to get as high as many of our opponents.

6) Not sure what the technical about, but if it was related to the referee call right before that, I'm right there will Bill. To me, it looked like a terrible call.

7) Probably could have played the non-starters a little more. Love to see them get some play time.

8) Jalen was good on everything but offense production. Keep hoping for a break-out. I know coach is too.

9) If Coleman-Lands played 3x minutes more like Agbaji's 31 minutes, would he have scored 24 instead of 6?

Jalen showed glimpses of playing up to his potential. Good to see him hit that three but his dime to Braun cutting inside for a layup, was a helluva play!

Not sure if the Hawks can win against good teams if two of our starting guards (Remy & Harris) continue to go scoreless as they did against UTEP. That's putting a lot of pressure on Braun and Agbaji. Harris seems reluctant to shoot the ball and I don't think Remy is looking to score. McCormack needs to dominate in the paint, but he seems reluctant to do so at times.

Agreed, Remy does need to score more, but last night his shot just wasn't falling. He did well in the passing/assist game though. He made a few passes that just looked awesome that turned into turnover because the receiver wasn't ready for the quickness and high ball speed. I blame that on last year. I don't remember any hard passes last year. Pretty sure our bigs are not used to them yet.

Our SOS isn't even in the top 10-15. Can't remember the last time our SOS was this bad.

A win is a win...but would be nice to get a few against good competition.

Interesting point, Keith, although if we had beaten Dayton we would have had a shot at being Number One in the polls...ironic, huh?

If you want to learn more about KU's historic loss to Texas Western (now UTEP) in 1966, you can go to the KU Book Store (or Amazon) to get a copy of More University of Kansas Basketball Legends.