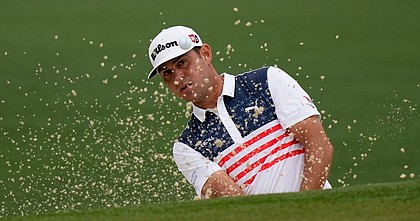 With birdies on three of his final seven holes Friday, former Kansas golf standout Gary Woodland finished his second round at the Masters at even par and in position to stick around for the weekend.

Woodland, who shot a 1-over 73 in Thursday’s first round, saw his score for the tournament fall to +4 after a bogey at No. 10 on Friday. But he followed that up with birdies at 12, 14 and 18 to finish the day where he started.

Justin Rose, who shot a 7-under 65 on Thursday to claim the early lead, delivered a finish similar to Woodland's on Friday, carding birdies on three of his final five holes. The hot streak down the stretch helped Rose finish Friday's round at even par and he maintained his overall lead heading into the afternoon.

Woodland's +1, two-day score left him tied for 31st at the time he finished his round and two shots clear of the projected cut line of +3.

Woodland has recorded seven birdies and eight bogeys in his first two rounds at the famed course in Georgia, while shooting par 21 on his other holes Thursday and Friday.

He also has averaged 2.37 putts per hole.

The 36-year-old Topeka native entered golf’s first major tournament of 2021 on the heels of a sixth-place finish at the Valero Texas Open last week in San Antonio. That followed Woodland missing the cut in three of the previous four events at which he competed this season. It also marked his best finish of 2021.

Woodland has four career PGA Tour victories to his name, including the 2019 U.S. Open, one of golf’s four majors. His best career finish at the Masters came in 2011, when he tied for 24th place.